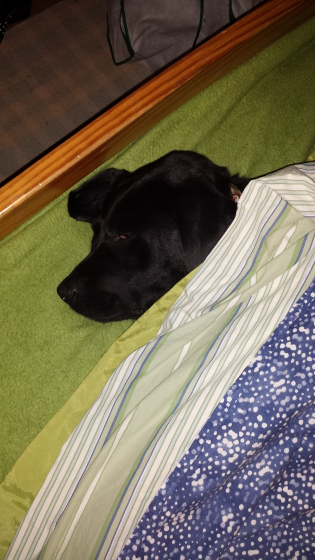 Let Loose the Dogs of War – by Don

You might get the impression that Max and I still battle like we did when he was a puppy. We do. The battles are different now that we’re both old and lazy. In the past, something as simple as getting Max in the car resembled a Nazi-Soviet slugfest with vast encirclements, unspeakable civilian atrocities, and unrelenting carnage as I charged through the neighbor’s puckerbrush to bring Max to Car-Door Justice.

These days, the war is a grinding attrition of wills akin to WWI trench warfare – there’s lots of hate and gassings, and neither of us is going to move much. Max takes his time. On his way to the car he sniffs this bush…. nips that blade of grass… Looks stalwartly behind him every 10 seconds as if to say “Was that a threatening sound?” It can take over 25 minutes to get Max the twenty-five feet to the car without any prompting. It’s as maddening as 1ft/minute sounds.

Of course Max can surprise you with a blitzkrieg now and then. Like when I get up to use the bathroom in the middle of the night. That blitzkrieg is focused directly at my side of the bed and my pillow.

When I stumble back into the bedroom after having performed my ablutions, it looks like a black, cancerous growth erupted on my side of the bed.

I’ll try to scat him out like I’m some kind of deranged goose hissing at him. I don’t want to wake up Liana so I hiss “Max.. out.. Max… Max…!” Max looks at me lazily for a second and then he’ll put his sleepy, precious head back on my pillow because he knows, odds are, I won’t make a scene that wakes Liana.

When he doesn’t move after my 27th hissing, I’ll grab the extra pillows and throw them at him. That sends him scampering for the couch in the next room. It also wakes up Liana. Auggie and Buddy will flee to the quiet of their dog beds in the living room. I’ll crawl back on my re-conquered side of the bed trying to sleep with the entire house awake and angry at me.

Think the battle is over? No! The battle has just begun!

Max reappears in the bedroom 20 minutes later and hops up on the lower part of Liana’s side of the bed. Over the next couple hours, he incrementally encroaches on my side. A little snuggle here, a little nudge there, a little WWI trench warfare there…. and the next thing you know, the blood is cut off to my lower legs and Max is gassing me like Ypres. His constant fidgeting slowly pushes me into a conniption fit where I’ll yell at him, grab my pillows (I need two) and hike it for the couch. He’ll avoid me for the next several days.

With all the war, all the contention, all the conniption fits, all the nights I’ve spent sleeping on the couch, not to mention the back problems I have suffered at the hands of this beast, I really only hate him for getting old.

I hate the gray in his muzzle. I hate his limp. I hate the lumps and bumps under his skin. I hate him jumping off the bed and hurting his joints. I hate him getting old. That’s the horrible curse dog owners sign up for – we’re going to watch our dogs get old and die. And the crushing part is that the dogs have no idea. I can always tell my loved ones how much they mean to me and how much I’ll carry them in my heart after they’re gone. If I told Coal the same exact thing, he’d cock his head as if to say “Beach?!?!? I’ll go get that tennis ball you really like!” They have no idea.

I love the younger pictures and videos of Coal. I go through them all the time. But I can’t go through the ones where he’s near the end.

After he died I would have the most awful dreams about powerlessness, loss, and death. I’d be with him in a crowded train station and suddenly everyone is panicking. I’d find myself separated from him. I could see him in the middle of the panicked crowd, utterly terrified, standing fast, and looking for me but not seeing me or hearing my screams. The worst dreams I ever had in my life were the ones where I’d see him fall through lake ice and I’d run out to get him but only see him under the clear ice trying to claw his way up.

I couldn’t save him in those dreams and I couldn’t save him in this life. I didn’t appreciate him in the 5 years we had him. I remember every time I yelled at him or called him a bad dog or I wouldn’t throw his tennis ball again, and I feel like shit for every single time. I really loved him. It feels like I had a million ways to tell him he was a bad dog but absolutely no way to tell him that I loved him.

I still look at my empty passenger seat half-hoping that by some miracle he’ll be sitting there and that I could give his gigantic bear head that proper scuffing he deserved one last time. That’s been one of the good dreams I’ve had lately – Old Coally-Coal smiling at me from the passenger seat of my rancid, 280,000 mile, hand-me-down Honda Pilot. And there are other dreams where Coal will just show up randomly in bizarre, dreamlike fashion completely soaked with a tennis ball, and begging me for a marathon swimfetch session. Those dreams are the best.

Every time I have a good dream with Coal, I’ll lie completely still in bed for a long time afterward and savor them. I’ll burn them into my memory as if Coal really came to life for those brief minutes. I’ll even go back to sleep hoping for another dream. I’ll carry those “memories” of him with me always and as if they really happened.

It’s a late night here at Southport as I’m finishing up this rambling blog. Liana is in Pownal. I brush my teeth and walk into the bedroom to see Max’s lumpy mass on my pillow. I know he’s pretending to be asleep because I heard him run into the bedroom and hop on the bed before I flushed the toilet. His breathing is contrived and shallowly unlike a sleeping dog.

I crawl into Liana’s side of the bed and start reading. Max spoons up to me and I put my hand around his belly. He starts playing “The Breathing Game” where we synchronize our breathing. I gladly play.

I don’t even bother. I grab my two pillows and head for the couch.