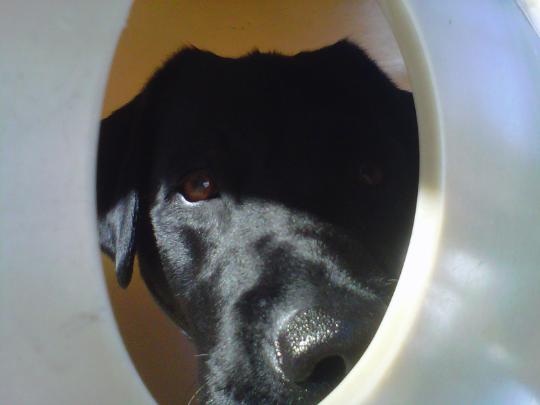 When I left you last, Max was eight weeks old and had emerged from his Stone & Steel Stove Fortress to shred a little toy named Blue Bear. We realized that Max would tolerate us as food, shelter, warmth, treat, and shreddable-toy providers. Nothing else. We were ecstatic.

We shall now (with your permission) discuss Max - The Destroyer of Weddings. And yes, that is his Official Viking Name.

I realize now that my biggest mistake with Puppy Max was teaching him to think through problems. I would put him on one side of an obstacle like a 2ft-diameter blown down tree that he couldn't waddle his big butt over or squirm under and I'd say "COME" in the sternest voice I could.

At first Max would just sit and whine from the other side of the tree. Then he would try to surmount the tree directly and fail over and over. He would look at me with malevolent eyes. He would run the other way trying to get me to chase after him. He would furiously dig at the ground from the other side as I showed him a particularly luscious treat. Then he would run back and forth. At first he just ran a couple steps. Then longer and longer up and down it trying to find a way around and BINGO! he was on the side of the tree with the treat.

I would heap praise on him like he won the Nobel Prize. He was so proud of himself that he could barely be contained. I admit that it was addictive to put Max in think-outable situations. His happiness was like a drug, and I did it every opportunity I could.

I had no idea I was nursing a viper in the heart of Chez Salty.

And when I say Max destroyed a wedding, I mean Max completely, thoroughly and utterly outwitted me to become the darling of a large wedding whilst I looked on in horror. Thankfully, I was not beaten up by drunken thugs in the parking lot. Nor was I sued by lawyerly thugs in court. Much worse, I was the hapless foil attached to the insanely cute, furry little star of the wedding.

I will now tell you this shocking story with shocking detail and using only shocking writing with occasional hyper-links. This will avoid all the spittle I would spray at you if I was telling you this story in person.

In retrospect, the biggest mistake I made that day was letting him poop.

We lived on Phillips Lake in Dedham, Maine and we were regulars at the wedding-prone Lucerne Inn. One fine, drizzly Saturday in August, Liana and I decided to get a couple cocktails (me) and lunch (her) during a pretty big wedding.

I was a chain smoker at the time, and every 4 minutes I would go to the car to check on Max and ruin the gorgeous scenery with my deadly tobacco smoke. At one point during my smoke-fueled Max-checking, he whined to be let out. I thought he had to pee so I put the leash on him and grabbed "The Bags." We walked down onto the spacious greens and safely away from the hyper-fast, super-dangerous Route 1-A. And safely away from the wedding tent with its rolled-down plastic drizzle-drapes.

On that gorgeous, endless lawn, Max peed. He did cute, distracting frolicking. I took off his leash. He chased after leaves. He charged a seagull on the grass, and he cutely growled at some indiscriminate object in the wood line. But most importantly, he came when called. It was such a pleasant departure from the vindictive, calculating Max that I should have suspected treachery. Did I mention that he got sopping wet from rolling in the dew on the lawn grass? He most certainly did.

After about half an hour of "Cute Compliant Max" we headed back towards the car. We got close to the draped wedding tent where the lucky couple were literally saying their vows. Max squatted to poop. He strained. I worried. He pooped a little. I looked down at my pocket to get the "The Bags" and I stooped to pick it up...

And Max was GONE. He was a bolt of lightning right through the slit in the middle of the wedding tent. He ran straight up the aisle where he planted his black, hairy, sopping wet, anvil-like head squarely into the crotch of the bride's expensive white dress. I watched this all through the opaqueness of the tent drizzle flaps with his warm poop bag in my hand.

At that moment I considered diving under the wedding tent slit and chasing him up the aisle. That would be most satisfying, but how would that look to the guests, the law-enforcement officials, and the judge? I would look insane at best, and shootable at worst. I had to forcibly suppress the intense urge to yell "MAAAXXXXX!!!!" as loud as I could. That urge also had a bunch of swears in it. And I briefly thought about getting into my car and driving away to start a brand new life somewhere in the Rockies where no one would ever find me. That thought was hard to squelch.

Dave the Bartender knew exactly what to do because in the past he had dealt with such emergencies as "Actual Flying Bat in a Full Dining Room," "Completely Drunk Tourist Forcefully Critiques Maine to Actual Mainers at the Bar," and "We Have No More Allen's Coffee Brandy." I was in good hands.

Anyway, Liana and Dave ran downstairs to take situation in hand. I collapsed on that lovely old chestnut bar. My drink was still there. The sweat on the glass was thick. I hefted the glass and the sweat dropped all at once to the coaster. I took a greedy draught. The Red Sox were losing in the 7th by a lot. The bar was completely empty.

I realized I had a bag of Max's poop in my hand that needed tending to. I began walking out and realized I still had a lit cigarette. Soon the squirming, smiling, victorious puppy would be back. Also Dave and Liana. And all the wedding guests. There would be no denying it- my puppy had just mowed me over.

I could hear the flower girls down below in the wedding tent wailing "Don't take the puppy away! No no no no!" Max was having the time of his life.

I looked around the bar. I was so thankful for those peaceful minutes. Ever so thankful. And Dave never mentioned the smoke in his bar that afternoon.