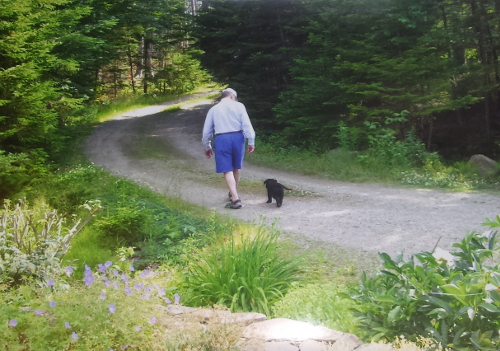 Always a Head-Rub for a Good Dog – By Max

I’d like to talk to you for a second about someone who meant a lot to me. I can’t remember when he wasn’t a part of my life. He was Whit Smith and he was my friend.

Whit’s gone now. I was by his side when when he passed.

I should have realized there was trouble was when Deb and Whit didn’t go away to The Warm Sandy Place with the swimming pool when it was cold (Editors Note: Florida). He kept staying in his Southport house by the ocean even when there was snow. It was the best! Coal especially enjoyed snow-fetching for Whit and snoozing by the fire at the ground-level fireplace afterward. Whit would scuff Auggie’s noggin’ until Auggie was dizzy and then send him after a tennis ball in the living room over the strong objections of his wife, Deb.

At the time I didn’t realize why Whit didn’t go to the Warm Sandy Place. We were all just happy Whit and his wife Deb were there.

I started to realize something was wrong with Whit when he wouldn’t get up to come give me and the rest of the Salty Pack a head rub. So me and the boys would gallop over and crowd around him in his living room chair as he tried to give us all head rubs.

I knew things were really wrong when us dogs were let in The Forbidden Bedroom one at a time to get a head rub from Whit. We would all get one. Even Big Buddy Dog who didn’t understand why he was in the Forbidden Bedroom but was so excited to be in it. Whit would laugh but not as hard and not as long as we were used to.

But I knew things were near the very end when I had to get head rubs from Whit in a new place that was very white and slippery and smelled like bleach. People were very nice in there and they seemed happy to see me. I would poke my head into other rooms and people would say “Hi Doggie!” or “What a good boy!” I would wag my tail helicopter-style and smile at them for a second, but we had places to go.

Coal couldn’t come in the Slippery Place because he gets terrified of slippery floors. Buddy didn’t come visit Whit there because… well… Buddy’s kinda dumb and wouldn’t really appreciate the experience. He would just sniff for crumbs of food where there wasn’t any. Not in an intentionally disrespectful way. More like a big dumb dog kind of way.

I don’t think Coal or Buddy understand what happened to Whit. They didn’t see him in the Bleach-Smelling Place. They think he went back to the Warm Sandy Place. But Auggie would go see Whit. We never went at the same time – that would be too much slippery floor dog-craziness for the Bi-Peds. Sometimes when Auggie got back in the car after one of his visits I could tell he was affected by Whits state. Auggie would never admit it. We never even discussed it, but I knew.

I can’t speak to Auggie’s experience, but when I visited Whit in the White Slippery Bleach-Smelling Place he could only move one hand. Whit could barely scratch my head and I would lick his hand to let him know I was still there. He laughed once when I did that and I will always remember. It might have taken all the strength he had in this world, but the man would manage a head rub. Whit always had a head rub for a good dog.

And so Whit Smith, My Old Friend, I hope that wherever you are now there are dogs. Lots and lots of dogs. I hope they’re all Good Dogs and worthy of your generous head rubs and long walks. I will remember you until my time at the Bleach-Smelling-Place, Whit. I hope I see you then.