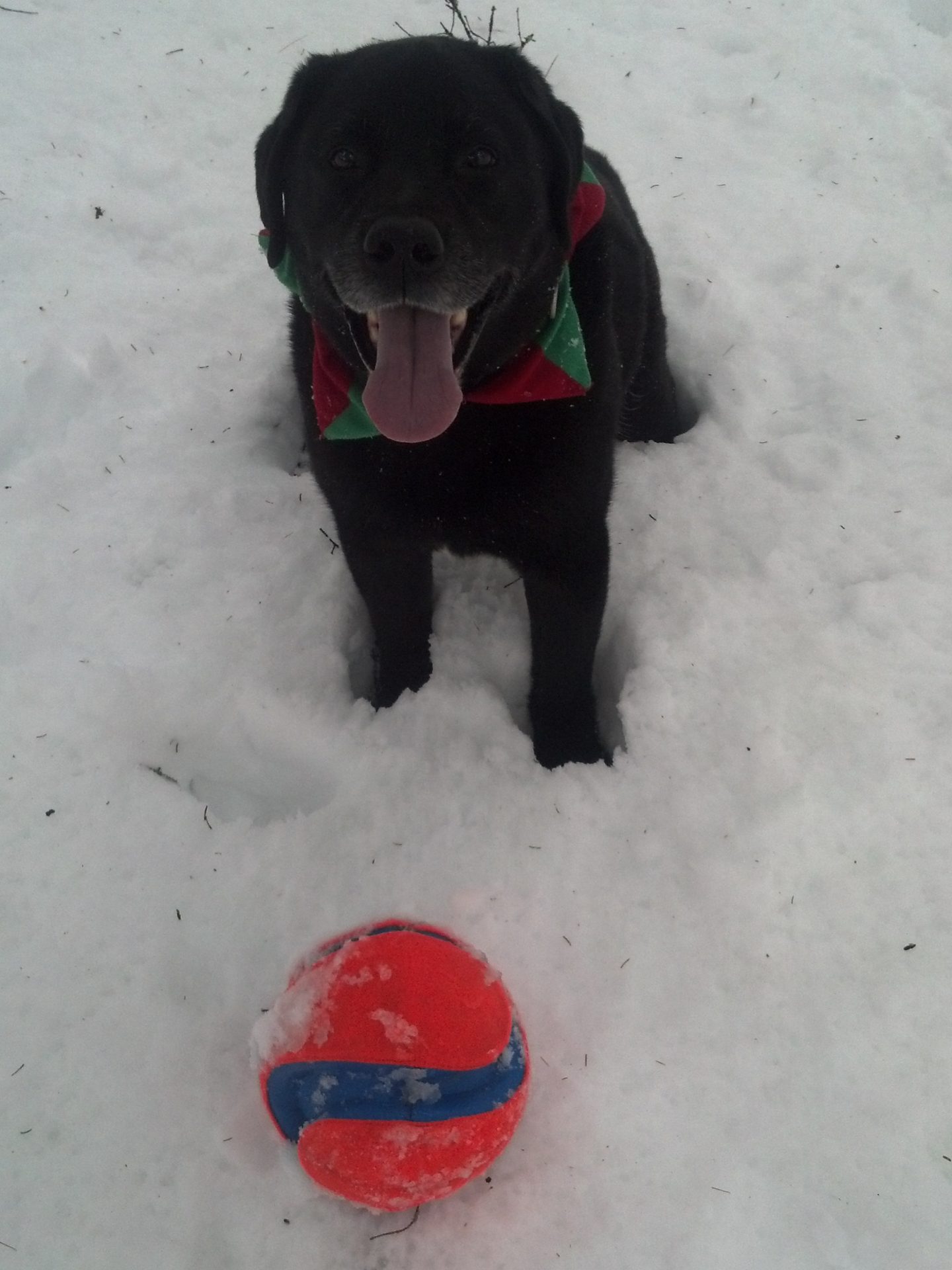 I didn’t think it was appropriate for another dog to write about this. And given how much I loved Coal, I didn’t think it was appropriate to skip or gloss over it. We lost Coal on July 19th. He was almost 13. We’d had him since he was 8. I’ll try to stay away from cliches in this blog. And I’ll also try to refrain from telling too many long-winded “inside” stories. No promises. All I know is that this is catharsis for me. Thanks for staying tuned.

And I admit it freely. Coal was my favorite dog of the four.

Coal came to us on the day we opened the shop, literally. And yes. If we’d known he was going to be such a huge part of our lives, we definitely would have named the shop Three Salty Dogs Pet Outfitters. As it was, we had our hands full opening the doors of the shop for the first time. We let it slide.

He came with a spartan bed, a cute blanket, some food, a food bowl, a vets record, and a little stuffed monkey. Max and Auggie ripped the little monkey up within hours of his arrival. Coal didn’t mind.

Coal went absolutely nuts when he found out we had a small stone and gravel beach on Southport. He would eat his breakfast and run out the door to wallow in the water and fetch tennis balls thrown by neighbor kids. He would even just swim around aimlessly. He was in absolute heaven. Sometimes he would come back to the cabin around lunchtime, drink a bellyful of water and run straight back to the beach. Some days Liana and I would have to drag him back to the cabin for dinner and to sleep.

He hated zombies. That was a subject that got a lot of laughter around Chez Salty. The thought of Coal hating anything was absolutely ridiculous. If you “acted” like a run-of-the-mill zombie Coal wouldn’t pay the slightest attention. But if you REALLY acted it up and moaned convincingly, sluffed the back leg as you staggered towards him and raised your arms like you were going to get him – he was a vicious snarling beast! His hackles went up, he would crouch back – looking like he would spring. Barking, Barking Barking… We did a lot of Halloween promotions with his hatred of zombies. “Get Coal to Bark at You and Get a Free Bag of Dog Treats.” Oddly, we didn’t give out as many treats as you would think. You had to BE that zombie.

There were also the truck seating dynamics. Max was always my boy in the front seat of my old Ford truck. All other dogs sat back in the King Cab. When I had to trade in my F150 for Lianas Honda Pilot, Max could no longer fit in the front seat, and Auggie just wanted to be around Max. So Coal slid into that shotgun seat and just stared at me. Stared. Up until the end Coal did this.

I would be driving for 7 hours and bored out of my mind. I’d turn my head quickly and see Coal staring and smiling at me. He’d put his paw on my arm. That was my cue to rub his ears.

And he could be a big pain in the ass. He would sink his furry little butt into swamps, mud-holes, puddles, “Vernal Pools,” wading pools, and good-old-fashioned-American compost piles. And what was even worse was that his fuzzy coat would retain the moisture and stink. After a few hours, the fuzz, stink and heat would combine to ferment Coal into a foul-smelling but happy ball of filth. He came to accept frequent baths, but he never liked them.

And he hated the ear medecine he really needed for his yeasty, itchy ears.

Other than that, he was a pretty good dog.

There was nothing we could do about the liver cancer that marched through him. I suppose we could have taken Coal’s rotten-wood eating/vomiting and weight gain as serious signs. But those things happened over such a long period of time and seemed so unrelated that we didn’t suspect a thing. He was a 12 year old dog. He was always happy and hungry and active and social and would give me kisses from the passenger seat when I was driving.

He sniffed all treats offered and rejected most. He always ate slower than our other dogs. They would close in on him like vermin as he was delicately licking up the last bits of his dinner. He never ate bully sticks or pig ears or any kind of body parts. He liked cookies and biscuits.

He never assumed he deserved a treat. He went to meet every dog and every person who entered the shop. He loved everything, everybody, everywhere, all the time, wherever he went. And he always tried to be a good boy.

On his last evening with us, Coal got up and went to the door of the cabin. Liana and I thought he had to pee. But with great effort he made his way down the little trail to the dirt road. Liana and I scrambled out the door to follow him.

He trod on down the road. We let him stay walking out in front of us. He kept plodding along – full of cancer and pain and determination. This was important to him. We swatted the mosquitos and horseflies away from him as the sun went down and the full moon came out.

When he got to the beach, he waded belly deep into the water and looked around. His breathing calmed. He looked back at us on the stony beach and then out to the open ocean and to the full moon. He must have stayed there in the same spot for a good 15 minutes looking at everything. The waves went in and out on the stone beach like a gentle music.

And with no prompting from us he turned around and waded back onto the beach. He ambled up the shore and back to our cabin.

He spent the rest of the night on the bed with us. His breathing was short and shallow. We tried to get him to eat a bit of steak from the surf and turf dinner we’d gotten him. Nothing. My hand was on him the entire night. I felt his shaking and his shallow breathing. I felt the cancer killing him. I felt him suffer and I cried.

The next morning he wouldn’t eat anything. He got himself off the deck and it looked like he wanted to get down to the beach again. He fell over in the walkway. We ran over to him. He didn’t bother trying to get up. We got down on the ground and stroked him and sang soft, meaningless little upbeat dittys with his name in them. Like this: “Coally Coal! Little Coal… We Love Coal!! Little Coal….Coally Coally Coally Coal….” That seemed to help him. More likely it helped us. We prayed for an end to it. Dr. Dean came over shortly thereafter and released Coal where he lay.

Two days later when the three other dogs came back to the cabin, they crazily sniffed about the spot where Coal was put down. I have no idea how they knew.

Coal was cremated with his original cute blanket, all the parts to the little stuffed monkey that Max and Auggie ripped up, and a toy he loved that we called Quackfish.

We may be old fashioned, but we don’t want to spread his ashes. He’ll rest looking over the small stone beach he loved so much. We want a place that we can go to always remember him. We never want to forget him.

We are going to miss Coal. And maybe that’s why it’s important for me to write this down- to define the messy transition of his death. To somehow define that moment where your loved one stops making memories for you and becomes only memories to you.