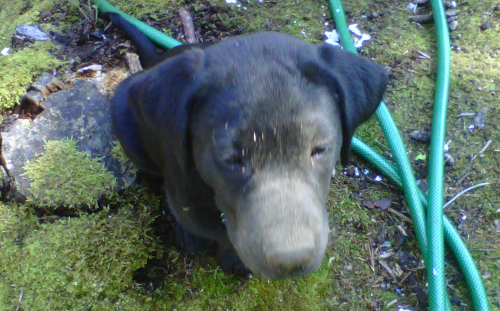 The Evil Vets – by Auggie

You should know that for this Blog I originally proposed booking a flight to one of those primitive countries what delight in eating dogs. Then my plan was to stalk, hunt, kill, and eat a Dog-Eating Biped on Facebook Live. Don’t be so shocked. It is only a murder if it is Biped on Biped violence or more than two crows. It would be titled “Man Bites Dog” in the deliciously-ironic style I am revered for.

Unfortunately, Max’s constant usurpation of the Blog these last months forbade such a foray. Also, my Kickstarter page failed to raise sufficient funds. However, I shall keep this topic in the “active” docket until it can bear reasonable fruit. Let us hope Fatso does not feel the need to express another endless series of erratic and schmaltzy dribble in the near future.

Faithful readers will no doubt remember my skirmishes and outright battles with The Evil Vets. On numerous occasions they have attempted to surreptitiously silence and later, outright kill me such that I could not spread the truth regarding their completely repugnant and loathsome power-seeking essence. I was gravely wounded by them and I live in constant fear for my life. I feel like a Ukrainian child in a civilian corridor.

It seems The Evil Vets circumvented my augmented cyborg power by refusing to engage me in pitched battle. No, the cowards could see my puissance was too great to overcome by conventional means alone. They would need to execute a masterstroke indeed if they were to unseat Augustus Megatron Bulldozer Kingsbury.

I must admit their next nefarious plan was exceedingly brilliant, and I regret to say I was thoroughly taken aback by their cunning. Yet how could I presage an infiltration of Chez Salty by some destitute ragamuffin? Furthermore, a ragamuffin the Bipeds were wholly and inexplicably in utter, blind love? It all seemed like a Richard K. Dick novel to me.

Perhaps it was mind control or brain-washing by The Evil Vets that made the Bipeds compliant. Perhaps The Evil Vets were adding a drug to the food or water, or using a cutting-edge mind-ray operating at frequencies only geniuses could fathom. Regardless of the means, The Salty Pack had become a toothless and moribund group. Whatever confidence I had in this pack after my assassination attempt had evaporated like a morning dew in a desert summer day. The Bipeds remember naught of the earlier attempts upon my life. They remember nothing of my transmogrification into an Evil-Vet-Combating Cyborg. They have become thoroughly wilted and fallow.

The infiltrating ragamuffin, properly known as “Marz,” has been operating without restraint within Chez Salty for over two months. When this little vagabond conducts himself with ghastly etiquette, he is showered with unfailing approbations from both Don and Liana. He is tasked with the merest of purpose and fails time and time again, whereas I have mastered all such things Don and Liana ask of this runtish brute. Things such as: “SIT,” “STAY,” “GIMMIE 5,” fetching, and and a whole plentitude of complex commands. I receive nothing. Not one miserable treat scrap. Certainly not the exquisite treats this usurper is plied with ad nauseum for his massive and repetitive failures.

If the Bipeds and the rest are blind to this Demon implanted by The Evil Vets, then I must rise and take matters into my own paws. I have always done my utmost to foil these noxious and spreading Veterinarians! They have reeled against my heavy blows and exceptional intelligence, and they shall do so forevermore! LONG LIVE CHEZ SALTY!!!

I struck at the Marz-Demon on his first night at Chez Salty. He challenged me for my medicines what are grudgingly given out by an uncaring and indolent Don after dinner. It was an ambuscade Marz won’t soon forget, I can assure you of that! Of course such a preemptive attack landed me in the Bathroom of Eternal Dread where I spent the better part of a week in extreme physical torture and starvation (Editor’s Note: He was in the downstairs bathroom for literally five minutes). Not only that, when I was released Liana gave me an icy, accusatory look! The nerve that deluded woman displayed! I was defending her when she was too brainwashed to care that we were all in need of basic after dinner medicines!

Barely a week later, the Evil Vets’ Demon Implant disobeyed the most sacred law a Dog could ever even conceive of breaking. The Bipeds set all the food bowls down with a clear “STAY” command in both voice and signal. Marz sprinted over to his bowl before a Biped gave the “OK.” I could not believe my eyes! I had no choice but to intercede and bite him squarely on his head. The poseur ran around the house squealing like a stuck pig, attempting to garner sympathy from the rest of the pack. Of course my defense of Chez Salty rules earned me another torturous trip to The Bathroom of Eternal Dread. My dinner congealed and was left to rot. It quickly became a feast for swarming flies and vermin what is rife in Chez Salty (Editor’s Note: We have no idea what Auggie is talking about).

I was released from my bathroom torment by Don who grunted like a sack of Russian hammers when he hit me rudely with the bathroom door. I suspect by his grunting that he needed the bathroom most urgently for his whiskey-induced bodily functions, and I was merely in the way. I was released to my week-old, insect-ridden dinner and choked the rotten mess down as best I could. One needs strength to save Chez Salty!

Barely two weeks later, it struck me like a holy shaft of golden light from Dog above. It was winter. The little bastard was sent here to weaken Chez Salty by eating our limited winter food supply and medicines!

There has hardly been a morsel of excess with regard to food nor treat at Chez Salty since this beast joined us. The Evil Vets intended to slowly starve and malnourish us into lethargy and eventual death. I was sure of it.

I can bear the slings and arrows of wicked deprivation, but can Half-Jaw Teddy? Can Old-Decrepit Max? I think not. Who would protect Half-Jaw Teddy from starvation and scurvy? Could I load the poor beasts on my shoulders and set out for a Dog Sanctuary?  There was no choice. We were Chez Salty brothers and as long as I had free reign, I had to help them no matter the cost to me or what an array of washouts they are.

I struck at The Demon after a particularly bountiful and delicious dinner in the dreary month of February. I had gotten canned food, which was quite a luxury considering our winter hardship.

The Demon swabbed out his own bowl of kibble, then messily churned out the contents of the communal water bowl across the floor with his unforgivably filthy paws. Then he possessed the audacity to advance upon my own sacred food bowl with similar intentions!

It matters not that I was done with my dinner and patiently waiting for an extremely lackluster Don to hand out our vital medicines. What mattered was that my dinner bowl was mine to do as I saw fit, and I could not tolerate the vulgar acts of some ignoble upstart obsessively licking at it with his befouled and ribald tongue!

I struck with voracity and malice. Again, I was similarly punished in The Bathroom of Eternal Dread. I regretted nothing. My torment- righteous. My struggle- just. (Editor’s Note: Auggie has a very vivid imagination)

I could sense Marz was beginning to feel the nascence of fear.

Post Script: I abhor the use of the letter “Z” in his name. I shall devote an entire month’s writings to this subject alone in future. Do not preempt me on this subject. You were warned.

One reply on “The Evil Vets – by Auggie”

[…] I have been repeatedly ambuscaded by, and triumphed over The Evil Vets. My mettle tested by Doggy Day Prison, and still suffered the slings and arrows of Don’s dark […]