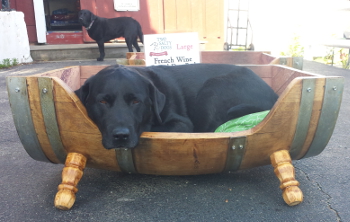 I want to tell you about a place that means a lot to me. I’ve been going to Gail’s House since I was an 8-week-old pup. From the minute I met her, I knew she was special. She speaks to me in a very high-pitched voice. Most people sound like phonies when they do that – like they think I’m an idiot and they need to use that high-pitched voice to get my attention. Not Gail. She sounds like her voice is higher pitched because she really is overflowing with sweetness. Even when I am being a very bad dog indeed. She uses the high-pitched voice and gently steers me away from the danger zone. Don yells at me and drags me into a timeout.

Gail gives me loads of treats. But the BEST thing about Gail was that she had a giant pile of manure. Gail is Don’s Mom.

We spent a lot of time at Gail’s House when I was young. Four years before Don and Liana opened the shop we spent a summer scraping and painting it for her. When I say “we” I mean Don was on a ladder all day working and I romped around the garden with Gail.

I hear lots of dogs won’t eat vegetables and I feel sorry for them. I ate my first green bean from her garden. It was fresh off the vine. I had my first strawberry there. They were plucked and given to me. So were snow peas, regular peas, asparagus, carrots, tomato, onions, broccoli, turnip, summer squash, zucchini, part of an ear of corn, sunflower seeds, pumpkin, rosehips, and so many blackberries that I got the soupy poopies. I also found a rotten cantaloupe in the composting bin. I’ll never forget it. And rolling around in the compost pile got me magnificently stinky. Unfortunately, the next day I got a lousy bath and there was a bunch of netting around the compost pile. Talk about bad luck.

Gail’s Garden would have been much more enjoyable if Don wasn’t there. He would always yell at me from his ladder when I would run into the garden and start digging potatoes. Sometimes he would scramble off the ladder, run straight down and grab me by the scruff of my neck and throw me into the truck. I can’t believe Don thought I would eat those potatoes. I was digging them for Gail, Don! Grow up! And maybe help out around the place once and a while!

What would you say if I told you one day a dump truck might come to your house and dump a gigantic pile of manure squarely in your yard? I swear to Dog it happened in Gail’s garden. I saw it happen. I’m sure of it!

I only managed to get a single good mouthful and a couple rolls in it before Don the Puckered Old Idiot grabbed me and marched me back to the house. I squirmed and desperately tried to wriggle free, but Don is a mean old cuss and derives pleasure by withholding pleasurable things from others.

He couldn’t put me inside the house. Lacy, Gail’s psychopathic, high-strung, eyeball-gouging cat was there. He couldn’t put me in the truck because it was too hot. He put a leash on me and tied me to the base of the ladder. I can hear a lot of you out there asking “Max, why didn’t you just pull the base of the ladder out from under Don such that he was seriously injured or killed and couldn’t possibly prevent you from getting to the manure?”

I tried. I really tried. But at the time I only weighed 20lbs. I’m actually glad I didn’t succeed. The bright lights that come with a giant pile of manure can blind you to certain practicalities. For example, if Don was dead or paralyzed, who would take me out on Walkies or feed me? And would Gail be angry with me if I turned her oldest son into the largest vegetable in her garden? Ha ha! Zing.

What I DID do was slip out of my collar 40,000 times and beeline it for the manure pile once Don was up the ladder. Don was so cute shrieking “STAAAYYYYYY!!!!!!” at my galloping butt from the top of the ladder.

On the 40,001st time, Don went on a swear-fueled tirade and alternately screamed at the sky and the ground. At times it sounded like he was talking to and laughing insanely with someone who wasn’t there. Then he looked at me and bellowed, “BAD DOG!!!!! BAAAAD DOOOOG!!!!!” I didn’t know it yet, but it was one of Don’s best meltdowns of all time.

Then he tightened my collar so small I saw little bright lights and my eyes bulged out. (Editors Note: Pahleese!!!!!) I sat down and that helped with my air supply and I felt a lot more comfortable. I was NOT going to die by the hand of Don.

That luscious pile of manure was so close. But more importantly I could smell it. All I could think of was that maddening fresh manure scent blowing off the water and right up my nostrils. Calling… yearning… stinking… and there was nothing I could do but sit there downwind and curse Don all day long.

We go to Gail’s House infrequently now – usually for holidays or whenever Don’s anti-psychotic medication kicks in.

It’s a lot different these days. Same Gail. Same house. Same garden. More dogs. No manure. Don fatter and more uptight… Everydog loves Gail, so I only get a quarter of the attention I used to. She doesn’t take me to the garden for fresh vegetables anymore because she’d have to take all the other dogs. And we all know what a horror show that would be.

How did I get older than Gail? Does time not work the same for everyone? Will Auggie one day be older than I am? By what yardstick should a dog measure his life?

And yet Don seems older and fatter. It seems like he’s aging more quickly than I am. Will I have to watch a declining Don pooping his pants and falling asleep over his food? What a horrible thought. Despite all the battles Don and I fight, I still love him and I don’t want to see him put down.

But it’s just a matter of time.

A parting thought: I’m sure you’ve been thinking – “What should happen if a gigantic pile of manure revisits Gail’s House while everyone is there for Thanksgiving?” Never fear. I have a plan all worked out.

I will skulk in the background, waiting for the other three dogs to drag the fight out of Don in their rush for the manure. When Don is near apoplexy and the other dogs are restrained, I will sneak in the garden and approach the pile’s blind side.

There I will find heavenly bliss…..