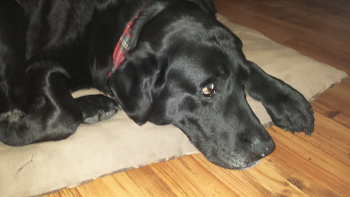 Hi there! It’s Big Smart Buddy Dog writing a blog about us dogs! Can you believe it? I can write! And I can rhyme!

So many things have happened to me since I wrote my last blog. Some things are happy. Some things are sad. And some things just happened. I don’t even know where to start writing. Should I mix up all the things so all the sad things aren’t together and make you really sad? Or maybe I should keep the sad things together because all the happy things will be together and that would make you really happy. Maybe there’s more sad things than happy things and it will be uneven. I’m really confused! I’ll start with a Just Happened Thing. Here goes!

Just Happened Thing… I got a new collar. See the picture of me up there? Don calls it a Scottish Red Tartan Collar and it’s made by our good friends at Uncommon Paws. Ask Don to get you one. If you’re nice to him and don’t get into the garbage I’m sure he will.

Happy Thing… The Big February Blizzard (Editors Note: All the February storms seemed like a month-long blizzard) was really fun! We all played in the snow for hours and hours. Max and Auggie played fetch in the deep snow with Don for a long time. I know! Even Max was fetching! He never fetches. But I guess that day he wanted to because everyone was having so much fun. And when Don would throw a ball, Auggie would jump really far and disappear in the snow! It was that deep! Of course I couldn’t fetch with those guys because of my arthritis but I had a good time rubbing my face in the snow and running up to Don with a big smile and burying my face in his crotch. Those are some of my favorite things to do! (Editors Note: Click Here for a super video of all the blizzard fun!).

Sad Thing… This winter has been tough on my bones. I have arthritis pretty bad and getting around in all the cold and snow has been pretty bad. I try to keep up with Don and all the other dogs. I used to be able to, but now I fall way behind. I really try to keep up! I guess I’m just not the pup I used to be. Liana takes me most days, so if you don’t see me at the shop I am probably OK and Don hasn’t given me away like he keeps joking he will. And now I have some medicines that Max and Auggie don’t get. Stay tuned to see if the medicines turn time into a pup I used to be. I hope they do!

Happy Thing… I met a new best Buddy! His name is Eddy and we are best friends. Don says it sounds like a TV show. “The Buddy and Eddy Show” he says. Eddy is named after the Eddy Road in Edgecomb. I wonder what road I was named after. I don’t know of any “Buddy Road” around here. Eddy is the dog of Two Salty Dog’s newest employee – Cindy. She’s super nice and gives everydog lots of treats. So come on into the shop, and if you’re nice to her, I’m sure she’ll give you a nice treat. Eddy and I hang around the shop and when someone comes to the door, we both run up and greet them. Make sure to give me a head rub first!

Sad Thing… I ran away. It wasn’t what you think. I wasn’t trying to run away from The Salty Pack. I was just trying to get away from it for a while. Before I was adopted, I was an only dog for 9 years. Sometimes being an old dog in a new pack is too much. One day when Don let me out to pee I went behind the house under a spruce tree that was pretty dry and warm underneath because all the snow weighed the branches down into a kind of teepee with a leaf bottom. It was really nice to be all by myself with no sound. In a couple hours I heard Don calling for me but I didn’t get up. He must have seen my tracks in the snow because he poked his head in my little snow teepee and sat down next to me in the crispy leaves. He didn’t say anything. No bad dog words. He just exhaled. He laid down next to me and put his hand on my belly. It was nice and warm in there.

Just Happened Thing… I got a new food. It’s scrumptious! It tastes just like my old food, but I get more of it. I think it has turkey in it. I get a lot more of it than Max and Auggie, so please don’t tell them. They’ll get mad.