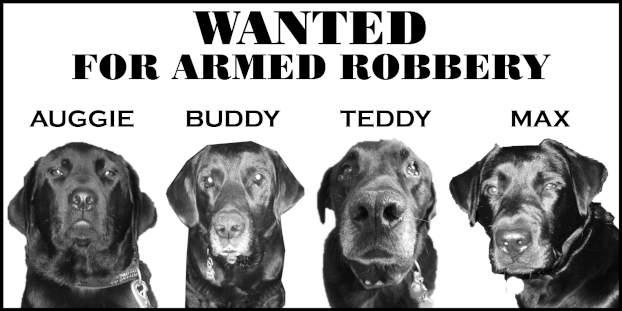 Hi there, Max here! I am just fine, thank you!

It was a dark and stormy night.

Rain and sleet hit the windowpanes of Chez Salty with a howling, wind-driven frenzy. The power flickered several times, but did not snuff out completely. Yet it was only a matter of time before it did. All dogs slept fitfully. All dogs, that is, except for Maximus Gary- Labrador Saboteur.

Maximus Gary studied the refrigerator with a carefully cloaked face. He studied it thousands of times before, yet this may very well be the last time he could study it. He had considered the fridge many times over the years, but this time was different. The Bipeds could suspect nothing. The witching hour was upon them. There was no going back. There was only righteous victory or stunning defeat.

A lightning bolt struck somewhere close to Chez Salty. Maximus Gary jumped and the house lights sputtered brown and black. Don swore sharply when the satellite TV went out and started its tedious attempt at reconnection. After a few seconds, the lights came on. The satellite TV was only on 13 of its 1,532 checks.

Maximus Gary laughed silently at Don’s impotent swearing at the TV and went back to studying the refrigerator for what would be the last very last time.

Little did the Bipeds know that Maximus Gary was educated at The Sorbonne in France where he dabbled in and excelled at Science, Engineering, Medicine, and Law. He was achingly handsome with his pure black coat, warm brown eyes, and anvil-like head.

Through some inconceivable series of events, Maximus Gary ended up in the clutches of these buffoonish and cruel Bipeds cowering in a far-flung corner of a dying empire.

But that was an story for another day.

In his years at Chez Salty, Maximus Gary discovered many patterns describing his cruel Biped Overlords. Most were trivial, mundane affairs. But the ham arriving exactly one week prior to the Biped Holiday of “Christmas” caught his well-trained eye.

Bipeds and their canines gathered at Chez Salty from far and wide. It was like clockwork. The ham. The holiday. The gluttony. The inebriated revelry. It was a time the Bipeds let their guard down. And that wasn’t a smart thing to do when Maximus Gary- Labrador Saboteur was around.

The ham lay deep within the safety of the well-armored and well-guarded refrigerator. As a well-cultured dog, Maximus Gary sampled a large board of Biped fare over his years- peanut butter, goose poop, chicken, turkey, deer poop, sirloin, shrimp, horse poop, lobster… But ham had the subtlety and deep flavor a refined dog such as Maximus Gary craved. It was also rumored that ham tasted much like Biped. Maximus Gary chalked those rumors up to wishful thinking.

And yet Maximus Gary dreamed of that forbidden ham. Almost every night.

To execute a plan of this complexity, Maximus Gary needed a team of professionals – dogs you could trust. He would have liked to spend years collecting and honing his cadre to perfection. All he could do in these circumstances was use the dogs available to him, modify his plan to their strengths, and control their weaknesses. It was the only way to construct a strike team given these circumstances. At the Sorbonne, Maximus Gary could have his pick of talented canines. In Maine, he would be lucky to get cohorts in the same species. 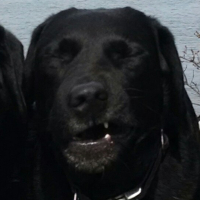 Grew up in the slums of Corinna Maine where he learned a military street cunning West Point graduates could only envy. Friends and enemies alike describe him as pernicious, caustic, brilliant, intimidating, and hard-nosed. He had a penchant for ancient literature and prose that he sprinkled in his casual speech and writing. He was much more intelligent than Maximus Gary, but much less refined and wise.

PROS: Augustus was the most brilliant weapons expert of his time. He was without equal. At least among dogs. However, Augustus’s true talent was intelligence gathering and highly-advanced warning systems. 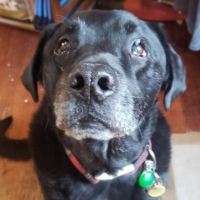 From the woods of Farmington, Maine. Teddy is an entirely self-sufficient Good Ol’ Dog who loves beer, broads, and biscuits, though he hasn’t ever had any of the first two things. His completely different ears are a mystery to modern science.

CONS: Hopelessly enamored with the lovely Biped Liana. He would disclose anything about THE PLAN for a little attention from her. 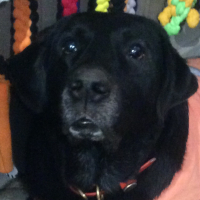 He was born sometime in the late 1960’s as part of a CIA Cold War program to breed animals with the lowest possible brain cell density. Buddy enjoys the gift of everlasting life and everlasting vomiting/pooping in places you would least expect. 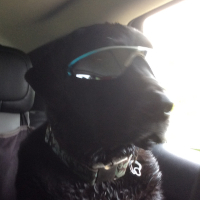 Refined. Sophisticated. Off-the-charts intelligent. Achingly handsome. As a pup, Maximus Gary stunned dog trainers around the world when he conveyed that he understood very well that they wanted him to sit, but that he just didn’t feel like sitting at that moment, and he would sit when he was damn well ready. Case closed.

This was the team. These were the dogs that Maximus trusted. They would all live, and possibly die together in the next twenty-four hours.

“Bipeds will sometimes cleverly Dog-proof a ham by injecting ‘cloves’ in a devilishly-close pattern on the ham’s surface. Cloves taste absolutely awful and burn the tongue. These nasty little bits of sabotage are about a half-inch long with a 1/8” button that sticks out of the ham skin. It takes the average canine a long time to remove a single clove, and removal of the number of cloves necessary for one meager bite of succulent ham is nearly impossible over the course of an hour. It is not advised that any Dog ingest any surficial cloves to get at the middle of the ham because not only will the cloves make any canine seriously ill, the vet will give you medicine that’s even worse. Be advised that The Bipeds will make you drink EVERY LAST DROP of the vet’s medicine. This is from first-hand experience.

“Canines should also be aware that particularly cruel Bipeds will affix the outsides of their hams with cherries and pineapples and other exotically-festive fare. Be warned- there are cloves underneath, but more importantly, those festive revelries are held to the ham with wooden toothpicks. Reports of canines eating toothpicks were all horrific with the worst cases resulting in the “exiting” of the toothpicks, if you get what I mean.

“If a ham must be the target, I suggest a Spiral ham. Spiral ham is a very special sub-unit of the Greater Hams. It has all the advantages and taste of a regular ham. But it is bereft of cloves. Either cloves were not inserted at all, or they were removed prior to slicing, because the tight , perpendicular pattern of slicing precludes it.”

Tertiary Targets: The Trash Can. Counter Food. Humiliating the Bipeds.

“The Refrigerator– A Biped term applied to the combination of a “Freezer” and a “Fridge.” Bipeds use it to keep dogs away from their food. The Chez Salty Refrigerator consists of a larger, upper, cool part called ‘The Fridge” and a lower, frozen drawer called “The Freezer.” The Fridge has two doors that open outwardly. The Freezer has a single drawer that pulls straight out. There are many variations in Refrigerators. In fact, The Refrigerator at The Cabin is totally reversed with The Freezer on top and The Fridge on the bottom. It is unclear what the reason for this is.

“The Fridge– As far as we can tell, the Fridge is meant to keep food cool. Bipeds enjoy cool food, snacks, treats and drinks. Items in the fridge range from enormously tasty, to downright dangerous, to utterly bizarre. Great caution should be exercised whenever a Canine ventures into the fridge. Bipeds have been known to scatter the fridge with tempting items that can only be described as “mines.” Cold Cuts like bologna are fantastic even in the plastic bag. But chocolate cakes can be deadly. And there are plenty of other non-lethal fridgemines to consider. Like lettuce, cucumbers, pickles, mustard, and iced tea.

“The Freezer– It is much harder to tell what kind of food is in a freezer because it is much colder and therefore harder to smell and much less frequently used. Most intelligence on the freezer was gathered from an incident where Don arrived home drunk and left the freezer open for a good two hours after taking out a frozen pizza. Our best intelligence says that there is a plethora of meat and treats in there, yet awful things like AA batteries and cooling packs. Conclusions regarding the freezer are thus: Not worth the risk. Anything stolen from The Freezer is a crapshoot.

“Conclusion: The Refrigerator is guarded and revered by Bipeds. Any successful assault on it must contain a variety of redundant plans. Executors of the plan must be highly trained, highly motivated, and highly fluid. Because of the restricted timetable, it is recommended that a Refrigerator Assault be delayed until next Christmas. It should also be noted that the Refrigerator at the Southport Cabin would be far easier to assault given that its Fridge is on the bottom and it’s located in a less-central area than the Pownal refrigerator.”

Maximus Gary scoffed at Auggie’s conclusion. The Southport Cabin fridge never held more than about a dozen mustards and takeaway leftovers in various states of decomposition. Sure, it would be easier. But it would also be a hollow victory without the ham.

Stay tuned to my next blog appearance to read how the heist turns out. I hope we make it!!!!

Until then, Take Care Everyone!