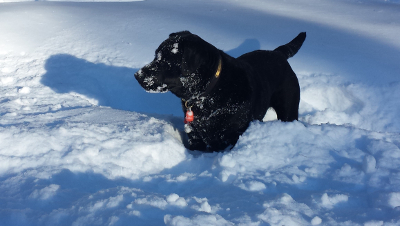 The Greatest Day — by Max

The Greatest Day started like any other – pestering Don to wake up at 4:30AM to feed us, breakfast and walkies, then back to the shop for treats and cajoling customers into giving us buttrubs and more treats. The store was really busy in the morning and it was snowing a little. But towards afternoon, it started snowing really hard and nobody came in. So Don shut the shop down and we went across the street to the lawn to pee and rub our faces in that sweet, sweet fresh-driven white happiness. And Buddy pooped.

It was strange. There was no one around. No one walking. No cars or trucks. No plows even. There was no sound except the wind coming around the buildings and howling (Editors Note: The noise reminded me of the movie The Shining). It was a strange thing I’d never seen before – howling wind and sharp stinging snow, then complete silence and calm. And just when you were used to the calm, the wind would roar back and the snow was stinging you again. Very strange.

Don brought us back to The Coal Shack and he put on his wool socks, super-warm hat and sheepskin gloves. And with Don now toasty warm, we set out on a giant super-dog adventure. We walked down Townsend Ave. in the deep snow. No cars. No people. No dogs. No shops were open. We had reign over everything Boothbay Harbor. It had been dark all day, but now it was really getting dark.

Of course Auggie ran over to see whether Andy at Slick’s Boutique and Jon at Grover’s Hardware had treats for him. No such luck. Andy and Jon were long gone. Everyone was long gone.

So we walked around for a while up and down those empty, windy, howling, snow-carved streets of Boothbay Harbor. Our tracks were covered quickly. I’m sure Don was terrified that us dogs would be running Willy and Nilly down the same streets this summer. Settle down, Don. Settle down. We understand a special day when we see one. Buddy might limp down the streets in August. But Auggie and I understand.

Anyway, those streets were ours. They FELT like ours. We fanned out. Dogs owned them. Dogs owned Boothbay Harbor! We could go wherever we wanted. Even Buddy was awestruck and limping down the street as fast as he could. Normally, I love to follow critters in the snow by sticking my snout squarely into their tracks and inhaling deeply. There were no critters. There were no tracks. There were no people. No cars. No other dogs. Just a strong wind and heavy, driven snow with only a few dim streetlights in town. Auggie and I wrestled in Townsend Ave in foot-deep snow. It’s something I will never forget. And I’ll have you know that I beat Auggie. Despite what he says in his next blog.

And just when you thought us good dogs would wander around Boothbay Harbor forever, we walked past Pier 1 Pizza down on the wharf. The place was lit up and full of people! Sarah came out and said “Don! Come in for a drink!” And Don said “I’d love to, but I have the dogs!” And Sarah said “Oooooohhh! You have the dogs?!?!?” That was when I realized that I was having the best day of my life!!!!

All us dogs got pepperoni. We got salami. We got cheese and butt rubs and dough, and peppers and LOTS of tasty things. And Don got a whiskey which meant that Don was happy and that Don stayed around Pier 1 Pizza and we got more pepperoni, pizza crusts, and even a slice of old pizza! Each one of us did! (Editors note: The dogs didn’t actually go INTO the restaurant. So please don’t call the health inspector or otherwise be a jerk).

After Don had a couple whiskeys and us dogs wore out the good will of all the Pier 1 Pizza patrons, we set off to cross the footbridge.

Now I’m a Lab. I’m basically a seal with legs. I don’t get cold. But going across that footbridge was cold. REALLY COLD. And wind-blown snow was stinging my eyes. I don’t think I’ve ever seen Auggie whimper, but he did on the Footbridge that night. He was cold. We all were cold. We headed back to Pier 1 Pizza (Editors note: I had 3 layers on and my stout Carhart jacket wrapped tightly upon me with a polar fleece hat and thick wool socks. The wind and the cold ripped through all of them like a doily). We all came running back. Literally. Frozen and demoralized like dogs in Napoleon’s Moscow Army, we slunk back to our Pier 1 Pizza fortress with our collective tails between our legs.

It was The Greatest Day.