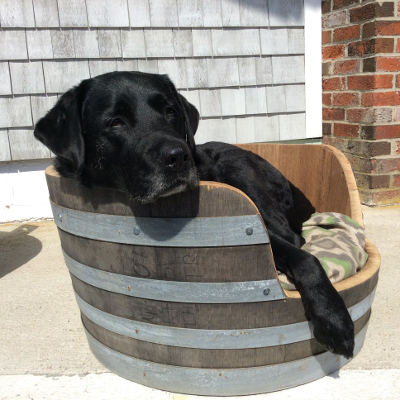 Hi there, Max here! I am just fine, thank you!

Don has been a big part of my life since he stole me from my cozy whelping box in Bangor. Whilst Don has taught me many valuable things and brought me to many wondrous places, we get under each other’s skin. I think it’s a good relationship inasmuch as it brings out the best in both of us like a Lennon – McCartney kind of thing. It’s not as good as the relationship I have with Auggie, but pretty good nonetheless.

If I tell you all the calculated ways in which I drive Don crazy, will you promise not to tell him?

I’ll take that as a yes.

Come Slowly When Called – This is the easiest way to get Don upset. Wait until all the other dogs are in the truck and Don is calling for you. Then walk slowly back, freezing frequently to scrutinize things in the wood line 2 miles away that you can’t possibly see. And don’t forget to lackadaisically sniff random things on your slow, meandering path back to the truck. Sometimes Don will get in the truck and pretend to drive off, but I just call his bluff. Liana would kill him if he ever left me.

Bite His Fingers – This is the quickest way to get Don upset. When he offers you a treat, lunge out at it like it’s the last chopper out of Saigon even if there are no other dogs around. Bonus points for how high up the wrist you can sink your teeth. And a little advice – don’t do this every time or Don will withhold all treats. Do it once out of every seven. That will keep the old boy on his toes.

Get In His Way – Don has said that his life at the shop is like being in a sinking U-Boat with four big, dumb, shedding dogs that are constantly in the way. I play a game where I guess where Don will be in 3 seconds and then go to that spot. Most of the time I’m beaten to that spot by Teddy. I think he’s clairvoyant. And Teddy’s record only gets better with the amount of weight Don’s back is carrying and how busy Don is.

The brilliant part about Teddy is that if he’s in front of Don and Don tells him to move, Teddy just backs up slowly. Auggie and I will part to the side or scuttle back and out of the way. But Teddy will just stare at Don and shuffle backwards. It’s a real hoot!

Lots of times I’ll just cede the game to Teddy and take a nap on the floor where Don is busiest. Usually it’s right in front of the cash register or in the doorway to the back office.

Extra points if you jump up suddenly when Don is trying to step over your “sleeping” body. If you do it right, treats and food come showering down as Don hits the floor. And the icing on the cake is all the treats you scoop up whilst Don is incapacitated and yelling at you from the floor. Guaranteed to make him howl!!!

Fart In Bed – Be careful with this one! Don is unpredictable at night. His mood depends on how many times Buddy has to pee, how many times Auggie barks at absolutely nothing, and how many drinks he’s had. If he’s particularly cantankerous, he might not let you in the bed in the first place.

I like to curl up with my head near Liana’s tummy and my butt pointed directly at Don. Not only will my wagging tail wake Don, but the gas is injected directly towards his head. Then I’ll start to encroach on his side of the bed. I play a little game with myself to see how quickly I can get Don to relocate. My record so far is 15 minutes.

Eat Something You’re Not Supposed To – There are so many things that fit in this category that I will break it down so you Bipeds don’t get confused and/or angry.

1) Stealing Other Dog’s Food – Teddy eats slowly and leaves a lot in his bowl. Auggie eats quickly and spills a lot out of his bowl. Nothing bothers Don more than me transfixed and encroaching on the crumbs of both.
2) Scavenging Food From The Ambient – Anytime I find anything edible that is not given or sanctioned by Don, the vein in Don’s neck will throb alarmingly. Like the time I found the jelly donut under the bench at “A Silver Lining,” or the bagel on the trail in Yarmouth. Or the tiny piece of Bare Bites lodged in the filth in between the floorboards at the shop. Whatever I find in nature to eat, Don is always screaming at me to drop it.
3) Theft – I’ve written a lot on this subject. Please reference this link for my Compendium.
I know a lot of you out there won’t believe the story I’m about to tell, but it is absolutely true (Editor’s Note: This is absolutely true). In the summer of ‘19, our neighbors in Horn Cove had a big party. Of course Don, Liana, and all us dogs were invited. It was quite the bash!! All our friends were there, Tuck, Pippa, Bear, Rudder… and a ton of Butt-rubbing, treat-giving Bipeds to boot.
All the Bipeds were drinking too much and having a great time. I noticed no one even cared what the dogs were doing. That’s when I made my move – I ran back up to the cabin and pulled the brand new 3lb bag of Sea Jerky off the counter, ripped it open and ate the entire contents. Then I licked the bag.
This where most dogs would ruin their perfect crime. Instead of lying down for a nap in my crapulence, I went back down to the party and seamlessly fit back in. It was hard to revel in that crowd with 3lbs of Sea Jerky sloshing around in my belly, but I managed until Don and Liana collected us and brought us back to the cabin. When we arrived back they were astounded. They passed the empty bag back and forth and said things in incredulous tones. Don said it was either aliens or the perfect dog crime. They couldn’t figure out which dog committed the crime or when the crime happened. They had no facts to prosecute.
I had diarrhea the next day and that blew my cover. Don was mad, but he wasn’t as mad as I thought he would be. I think he respected me for putting together such a complicated heist. It was Liana who gave me the Evil Eye for the entire next week.

It was worth it.