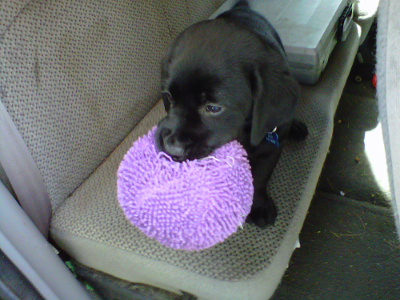 Supreme Fetch Dog Throughout All The Land – By Auggie

I AM AUGUSTUS MEGATRON BULLDOZER. First of all Canines in Rome and otherwise. Get used to it.

I WILL ADMIT THAT BEING SUPERIOR to all dogs and humans has left me a bit lonely. Not lonely in the fuzzy, plebeian, common-rabble way like sharing a dog bed with old chums, but rather lonely for somedog to give a challenge or give me cause for recourse. The “Salty Pack” or as I call them “The Faulty Pack” give no reason for stupendous victory or crushing defeat. Only lukewarm mediocrity shoved into ones snout. One level spoonful at a time. Over and over.

SO IT WAS WITH GREAT ANTICIPATION that we engaged another pack on April 12th. Sure, they outnumbered us 5 to 4. And they completely outweighed us with 2 Newfoundlands in their cadre. But we fought back with a tenacity not seen since the Battle of Britain. I was glad to see our pack hold together for the onslaught and ensuing dogfight (Editor’s Note: There was no onslaught or dogfight. We just walked and fetched together for about a half hour).

NOW IT IS KNOWN FAR AND WIDE that I am the Supreme Fetch Dog Throughout All The Land. And I have no illusions that there will be challengers and usurpers to this much sought-after title. And a worthy challenger struck that day like a bolt out of the blue sky. His name was Evan.

A RATHER SMALLER DOG THAN MYSELF, I originally discounted Evan’s build to my detriment. Evan was fast. Very fast. And we were both single-mindedly determined. But my advantage lay in my cleverness. That is how I ultimately beat the smug old cuss that was Evan that day.

YOU SEE, EVAN AND I WERE TWINED in a fetch-dog spiral. In a dead running heat, Evan would beat me every single time – paws down. But, for example, if the ball were thrown behind a mound, Evan would charge up one side of the mound and down the other whilst I would run AROUND the mound. More often than not, I would be waiting for Evan on the back side of the mound with the ball in my mouth and a smile. That would unnerve the old boy and I would play that card to full effect. I would not linger when it was clear that Evan had fetched a ball ahead of me. I would not bask in Evan’s victory, but merely acknowledge it simply with a quick nod as an honorable opponent should. And when Evan flaunted a particularly hard-fought ball in my face, I let him know exactly how I felt by charging at him and barking my most terrifying vituperations. We had to be separated by the Bi-Peds, both of us snarling and lunging at each other. I would not give any quarter, nor tolerate such insolence. And to my satisfaction, Evan wouldn’t either.

EVAN COULD ALSO BE FOOLED when one of the Bi-Peds would fake a throw with the Chuck It. I have LOATHED that maneuver since I was fetching tiny fuzzy toys in the whelping box. I have learned to keep my eyes solidly planted on the ball and not the throwing action. This “fake out” move wreaked havoc with Evan and I displayed a coolness that only comes with the experience of my battle-scarred years (Editors Note: Auggie’s only 4 and is hardly battle-scarred).

I AM ALSO NOT EMBARRASSED TO SAY that if the fetch-ball used was your ordinary run-of-the-mill tennis ball, my victories that day would have been few and far between. But by some fortuitous circumstance, the Bi-Peds were using an Evader Ball. That also gave me an advantage over the lightning-quick Evan. You see, the Evader Ball is a rubber ball with two horn-like prongs on it. When it is thrown, the bounce becomes randomized and impossible to predict. It is to a dog’s advantage to hang back and lunge when the ball is in the air as opposed to charging directly at it. Old Evan had clearly never seen the Evader Ball in action and I had been trained on it back when Don opened the shop. Evan was gobsmacked with my Evader Ball prowess. Even the Bi-Peds were amazed. Apparently everything Don has taught The Faulty Pack hasn’t been abhorrently meritless. Who could have predicted that?!

AND OF COURSE THE FAULTY PACK will never give me thanks for that day where I shouldered our collective honor squarely on my broad, massive shoulders. I have come to expect this. They take everything I have and clamor for more. I would certainly trade the entire Faulty Pack (including Don) for just one honorable Evan because he brought out the best I had. Evan, if you are out there reading this, I salute you. But I also give warning. You may be a FAST dog, but you are not a SMART dog. It takes both to be Supreme Fetch Dog Throughout All The Land. I shall be honing my body as well as my mind.

And I will be waiting.

[…] dung (Editor’s Note: Not true. But it sounds good.) I earned and defended my title of “Supreme Fetch Dog Throughout All The Land” at every turn and against any bright-eyed, hopeful usurper. I should admit their crushed […]