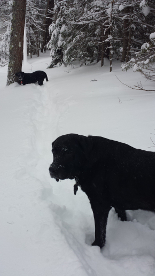 To be quite honest, I’m not sure how dogs evolved. They should be a dead branch on the evolutionary tree considering some of the things they eat – chicken bones, tacos, socks, couch stuffing, rotting things, socks, rat poison, driveway dirt, and other poisonous and intestine-blocking-and-shredding things.

Why aren’t dogs a dead limb on the evolutionary tree?

According to Darwin, every species has a “niche” where it has an advantage and will develop. The dog’s advantage is that people will pay vets (veterinarians, not veterans) a lot of money to extract disgusting and life-threatening things from their dogs, thus perpetuating the species. I’ve asked veterinarians all over the world why dogs consistently eat these stupid life-threatening things, and they (the vets) consistently beg me to put my pants back on and to get out of their office.

Liana and I own a house in Pownal, Maine, where Wildlife abounds. Cute Wildlife and Savage Wildlife. Both kinds of Wildlife interact together in a rich and wondrous tapestry of nature on our property. I never thought anything, ever, could detract my dogs from their breakfast. I was wrong.

One winter day, the Savage Wildlife brought down the Cute Wildlife in the form of a fairly sizable deer in our front yard. It was pretty brutal. If you ever wondered whether Savage Wildlife (coyotes) howl and carry on like maniacs during full moons and other exciting times like bringing down a terrified animal, I can tell you that it is absolutely true. Thank God there were no children around to witness it, and thank Dog there were no dogs outside when it happened. An infirm, deaf, partially blind, and friendly dog like Buddy would have been but an easy snack for these coyotes.

We were left with a legs-up, frozen deer corpse so close to our living room that we could hear the Savage Wildlife gnawing on bones as we watched TV in our living room.

Have you ever wondered why us simple country folk own guns? I can tell you that a 20+ pack of wild coyotes bringing down a sizable deer on your lawn and coming back to fight over the corpse night after night pretty much justifies that ownership. And let me be clear, I don’t shoot coyotes. I shoot over their heads so Big Dumb Buddy can go outside and pee on the lawn without being attacked and eaten by the Insane Pownal Coyote Posse.

Normally, we let our dogs out the back door in the morning so they can pee and poop before we get their breakfast and water bowls ready. Then they come charging in through our front door and maul their breakfasts.

After we acquired “The Carcass,” the dogs would run straight down to it and joyously frolic in and around it whilst their kibble got cold and congealed. They would straggle back to the house singly, looking enormously satisfied. Eventually, they would eat their breakfasts as though it was lukewarm sputum.

And I shamefully admit that I laughed watching painfully arthritic Buddy frantically wobble down to The Carcass for his morning snack. I’ve never seen him so excited. You’d think he brought the deer down himself. He’d stay down there for hours with a big, dumb smile on his face. Eventually, I’d have to put my boots on and gently lead him away from The Carcass to the house and his forgotten breakfast.

It’s been six months since the Giant Deer Popsicle. The boys still make pilgrimages to the site and bask in its past glory. Occasionally, I’ll have to take a femur or skull plate away from one of them trying to bring it in the house.

Once, The Carcass was ruled by giants. Now the dark clouds of flies, terrible odor, and swarming ticks are the rulers. Such is the wonder and beauty of nature. Darwin would be proud of our lawn.

But the question remains – are there flies and ticks that die from eating the equivalent of chicken bones, tacos, socks, couch stuffing, rotting things, socks, rat poison, driveway dirt, and other poisonous and intestine-blocking-and-shredding things? And what would happen, should I bring those poor, suffering flies to the vets for treatment with my pants on?

In the meantime, our new dog Teddy discovered The Carcass all by himself. He is striding across the ashes of a fallen empire.

And he is excited.