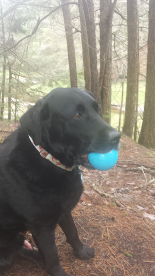 SEALs at the Gates of Don – by Auggie

Salutations, quislings. It is I, your Supreme Canine Commander in Chief – Augustus. I am ready to mesmerize you with my unique and compelling takes on Boothbay Harbor Dog Life. And I’d like to take this opportunity to thank you for picking up most of your trash in the Harbor this summer and disposing of it in your lesser, more lackluster states.

Columbus Day has passed like some fetid gas from the depths of a giant bull and we can finally think around here. No longer are people coming into the shop asking where the cheapest but best lobster roll is. No longer are people leaving “slightly used” poop bags outside the shop. And there are certainly no longer hordes of unruly children howling and throwing things around the shop in sugar-fueled tantrums. Thank Dog for that. That being said, most of you dullards out there don’t even realize the burden of my daily responsibilities. Shall I recount the many ways I keep this whole Two Salty Dogs farce on the rails? Every. Single. Day.

I shall use small words and simple phrasing to diminish your level of stupefaction whilst confronting my genius. You’re welcome.

12:01AM – 4:59AM: – Every night, Don is snoring like a behemoth gorilla on Benzedrine with sleep apnea. I keep hitting him in the face with my tail. I hope it helps keep him from swallowing his own tongue. At times, we’ll all- Dog and Biped- abandon Don to sleep anywhere in the cabin where his execrable snoring can’t be heard.

5:00 AM: That cretin Don is late in getting us up and providing us with a FEDERALLY MANDATED, timely and delicious breakfast. I do my best to kick him in the crotch or other sensitive places whilst he’s asleep to remind him that a Navy SEAL team could kick in the door at any minute and summarily execute him if we don’t get that delicious breakfast at a reasonable time.

6:00 AM: If the threat of military-style execution doesn’t get Mr. Sandman’s dust from Don’s eyes I bark like crazy at something like an insolent squirrel four counties from the cabin or nothing at all. That will get Don’s old Baboon cranium up and in a food-dispensing mood. Thanks to me, breakfast will be a mere hour or so away.

7:00 AM: My initial revolt against Don’s Biped sloth is finally recognized by the other dogs and they swirl around the bed like some kind of canine maelstrom. Max hops onto the bed and stares at Don. Buddy shakes his head repeatedly, causing his tags to JANGLE JANGLE JANGLE like when the FBI psych operation at Waco played “Muskrat Love” over and over until the Davidians decided to light their compound on fire rather than listen to that awful sound one more time. Don is bound to get up. Hopefully not to light the cabin on fire.

8:00 AM: If it were left up to that slugabed Don, he would lie in bed until he fossilized. Sometimes the methods above aren’t enough and I’ll have to bring my untouchable stuffed toy to his attention. This week it’s Sandy the Seal. No, not Sandy the Navy SEAL, Sandy the Marine Mammal Seal. No, not a Marine, either. It’s a stuffed animal. Dog, you folk are obtuse.

Nevertheless, I will show Don Sandy the Seal and if I garner no response, I will push it into his face whilst he is sleeping. Should he wake and reach for it, I will run away like the wind and leave only yearning in his heart.

Sometimes I’ll have to push Sandy the Seal deep into his brutish face dozens of times before he’ll gag and wake up. Thanks to my vigilance and insistence, Don has never forgotten to feed us or give us our medicines. Since I’ve been leader of this simpering pack I have never been thanked by anyone or anydog for my service. I have come to expect this and I have hardened my heart accordingly.

9:00 AM: Thankfully, we are on walkies. This is supposed to be the highlight of our day. And I suppose in a lot of ways it is. We’re not chained, nor are we supplicants to the overbearing authority of the Bipeds. Of course we can’t run in the road or poop on the trail, but we are let leave to explore the grounds as is our wont. My keen eyes scan the grounds for potential hazards like other dogs or people. Sometimes a contemptuous squirrel will dare show his face on my watch. Decorum prevents an accurate description of how that squirrel is eviscerated. Some days I almost feel sorry for them (Editor’s Note: Auggie has never even come close to catching a squirrel or anything more alive than his kibble).

10:00 AM: Big Dumb Buddy does not go on walkies with us. He is left to his own devices at the cabin because he’s not only very dumb, but very old and almost blind. It’s painful watching the old man walk, for Dog’s sake. Don describes him moving as an upright bag of bones. So Don leaves the sliding glass door at the cabin open a little bit so Buddy can get out and pee and poop whilst everyone else is away. Max, Don and I head for the shop.

11:00 AM: Max and I run around the shop and clean up the crumbs of treats rejected yesterday by little dogs who are fortunate enough to eat off their owners’ plates and not the vile offal that comprises kibble. I envy them so.

During the course of the day, Max and I are vigilant for anyone who comes into the shop with dog treats or something like a sirloin in their pocket. We will hound them until they relent and dispense with the exotic treats or at least give us some from the free treat bowl. When Don is in a foul mood he will recall us behind the desk and leave us to only imagine the succulent treats just out of reach.

12:00 PM: Don has no shame. He does not share his lunch with his ever-faithful companions. Nor does he let us get into the trash to select the rejected bits of his already demolished lunch. I find this utterly unconscionable and I cannot understand someone who is so blithe whilst we sit by and drool during his lunch. Utterly cruel.

3:00 PM: Pee Pees. Don wakes us all up (even Buddy when he can manage a shop visit) and marches us across the street so we can urinate. When he’s feeling magnanimous, he’ll pluck rose hips off the bushes and feed them to us. If you are amazed that dogs eat rose hips, I’ll ask you to never read this blog again. They are filled with vitamin C and they are edible. The rose hips, not the blogs. I shan’t respond to further inquiries on the matter.

4:00 PM – 5:30 PM: Don needs to be reminded that dogs need dinner just like Bipeds. We don’t demand Tuscan herbs, a salad fork, or fresh ground pepper. We just want kibble in our slow-eat bowls. Is that too much to ask from you Uprighters? So why should I have to trail Don around the shop in an intense panic for an hour and a half until I get my fair share of food from the Faulty Pack? Don will scream obscenities at me and yell “Go Lie Down, Auggie!”

6:00 – 8:00 PM: More often than not, Don will stop at Robinson’s Wharf to get his head swimming with cheap whiskey and some “vittles.” It used to be a huge problem when he wouldn’t feed us before leaving the shop. But after I chewed the bench seat and scattered its remains all over the inside of the Putrid Pilot, Don got wise and started feeding us at the shop. He also gives us pig ears in the car when he leaves to go get loaded and bloated as some kind of desperate insurance policy on his upholstery.

11:00 – 12:00 PM: Don’s in bed. Usually he’s reading some incredibly dull history book about Romans or space travel, but the Red Sox are still on the radio and that prevents the rest of us from sleeping. Or even relaxing because Don will randomly get up and randomly scream like a deep-toned banshee. It is incredibly uncouth and disrespectful to all the dogs trying to sleep in the bed.