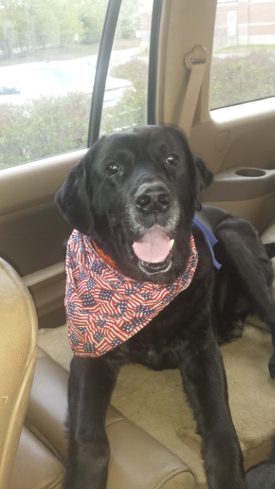 The Family Budster – by Don

I figured since I wrote pieces about getting Max, Auggie, and Coal that I was obligated to write one about getting Buddy. So let’s do this whether we want to or not.

I’m going to use all of Buddy’s nicknames in casual reference in this blog. Sorry in advance.

We came to know The Budster through a friend of ours who reposted their friend’s Facebook post about the dumbest dog in the world needing a new home. Haha! Just kidding! We had to figure out he was the world’s dumbest dog all on our own.

Anyway, I sent some texts to our friend’s friend and was told that Buddy had been adopted out. I didn’t think anything of it until I got a call back the next day saying the adopter returned him and was I still interested in him?

Hell yes I was.

I packed all three dogs into the Honda Vomitmobile and drove off to Buddy’s house. When we got there, I was a big jerk and just let all the dogs out of the car. They all ran over and swarmed Buddy and his owner. Then Max ran straight into the main entrance of the house where Buddy’s entire life was dumped. It looked like a big pile of failure. It looked like a bonfire pile.

Max bolted into the house and Buddy loped after him as best he could. I heard Max bark once loudly and sharply and Buddy came running out of the house completely terrified. He was followed closely by a happy, smiling Max. Alpha dog had been established.

I met Fuddy Duddy’s owner. We got along well. We started walking around her spacious lawn and she was telling me all about Buddy’s shortcomings. He had bad allergies, terrible arthritis, dander, and awful-bordering-on-gagging smelling ears. I looked down at him. He was scratching his face so hard that the hair was gone on both sides of his face and there was blood coming off his cheekbones.

Then Buddle squatted on the lawn and let loose a gigantic deuce. His then-owner glanced down at him pooping and stared at me gravely. “Buddy must poop twice a day,” she said. I went to say something witty. She cut me off and grabbed my arm, “MUST. POOP. TWICE. A. DAY.” She instantly went from a smiling, nice lady on a sunny day into a wizened crone in an ominous thunderstorm with that one sentence. And she didn’t pick up the poop on her lawn.

We circled around her lawn whilst I massaged my injured arm and looked for poopie land mines. I kept thinking of the terrible moment when I’d have to lift The Buds up in the car and speed away with him whining and panicked. I got all his stuff loaded into the Vomitmobile and Budless just hopped up in the back with the other dogs. He wasn’t afraid. He was saying, “Let’s Go! GO!” That picture is my favorite of the old man.

Fuddy Dudley never got depressed after switching homes and he never challenged me or the other dogs. He seemed genuinely happy to be with us and he shared his beds and toys with everyone. Even Liana.

It was a refreshing change.

We realized when I got him home that he was a compete mess.

Liana and I immediately set about fixing him. It was pretty obvious to us that he was allergic to grains, so we took him off his old crappy food and gave him a grain-free senior food. His itching stopped. The hair on his cheekbones started to grow back. That took care of about 80% of the problem, but he still spewed clouds of dander whenever he moved. I had an inkling that he was allergic to chicken just because I had seen so many dogs allergic to chicken in the shop. We switched him to a grain-free, limited-ingredient, chicken-free food and that made all the difference. We stopped giving him steroids and gave him fish oil and glucosamine. And we exercised him.

His owner warned me about exercising him because of his arthritis. All my friends with arthritis said exercise was the best thing to alleviate it. So Liana and I walked The Budster for an hour a day with our other dogs. It was absolute torment because Budder was not used to walking off-leash and he could become sniff-obsessed with something like a discarded coffee cup for hours. Hours. We forced him to walk because it was good for him.

Buddy liked eating, but it wasn’t the 15 seconds of uncontrolled gullet-cramming like Max and Auggie. Like Coal, Buddy actually tasted his food. It was a wonderful departure from my regular beasts. After about 2 years of that wonderful departure I looked down as he applied 200,000lbs of desperate force with his head to the door whilst I was letting him in for breakfast. I realized then that he had finally blossomed at Chez Salty and I got all weepy.

But it wasn’t all kibble and butt-rubs. Buddy drove me nuts because he would stand up in the back of the Vomitmobile and look out the windows. That meant he would fall down on the other dogs because he was so arthritic and wobbly. I would get furious at him and pull the car over to physically lay him down in the back of the car. I would yell at him like a crazy man and he’d look at me like I was absolutely crazy.

He’d hang his head out and have the best time. Even in the rain or snow. I think it had something to do with the fresh air blowing on his perpetually itchy face and dank, yeasty ears.

He wouldn’t come on command, or sit, or lie down. Fetch-balls would just hit him in the head. But man, could that dog give the best high-five on the planet.

The first time I was on the couch watching TV. He walked up to me like a tall, cool glass of water. He looked me in the eye. Then he slammed his paw into my face like he was playing Whack-a-Mole.

I was officially High-Fived. I just hadn’t played correctly. I should have raised my hand. Luckily, my face was there to complete the High Five so I didn’t look like a complete idiot to Buds.

Nothing gives the Fuddle Buddle more joy than high-fiving someone. And of course we’ve encouraged development of his high-fiving. He now does “Upside-Down Reverse High-Fives.” And the dreaded “Upside Down Triple Reverse Lindy High Five.“The dog is a high-fiving fool.

I’m sick of writing this, so tune in later when I reveal why we call him “Big Dumb Buddy,” why I drink so much writing this blog, and when Budless fell helplessly in love with a she-devil named Maisy the Cavalier.