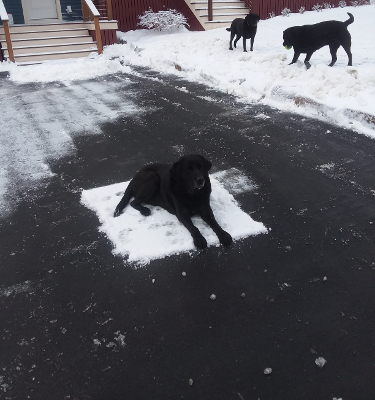 Hi there, I’m Big Buddy. This month is my turn to write the blog. I hope I don’t let you all down!

I got very scared in November because I was abandoned by Don and Liana. I get left alone a lot but this time I was abandoned at the cabin. It was very, very sad and I am still very sad and scared. I don’t know why they were mad at me. They could have just asked me to go away forever and I would leave. I have lots of friends. Especially at the shop. They LOVE me there. People at the shop love my “high fives” and because I tell it like it is. And my customer greetings are the best of any dog in The Harbor.

I know I have a lot of problems. I don’t complain about them. I’m old. I have tons of allergies. I scratch myself all the time. I have bad arthritis. I have gunky eyes and I always have to poop twice. My ears itch. Oh, and I’m deaf. And blind – I’m almost blind. But I didn’t deserve to be abandoned at the cabin that terrible day.

All us dogs get left in the cars all the time. And they will leave me in the cabin with the sliding glass door open a little bit so I can get out to pee and poop when I need to. I’ve been left in the shop twice for over an hour by myself. And one time they left me on a trail (Editor’s Note: He wasn’t abandoned. He fell behind us and took a wrong turn. It took me over a half hour to find him – just plodding down some side trail). I’m OK with all of that because I always knew they would be back.

This was the first time I didn’t think they were coming back.

On that terrible day I was abandoned for real. I was sleeping under the kitchen table at the cabin. I’ve been doing that for a while because I can’t see very well. I have “cataracts” and eye gunk. I feel safer when I’m under the kitchen table. It’s like I have walls around me and Auggie can’t steal my treats from me. It’s my Safe Cave. I can hear when it’s dinnertime or when we’re getting treats. As long as I’m awake I can hear them for important things. I’m almost never awake, though.

That terrible day they were moving things out of the Southport cabin. Food, clothes, boats, and other stuff. Don “drained the pipes” whatever that means. And Liana was cleaning like crazy. Max and Auggie were running around the house all excited. I just sat in my Safe Cave and had a nap. I didn’t want to nap, but when you’re as old as I am, sometimes naps happen whether you want them to or not.

When I woke up, it was cold and dark and quiet. Usually when they leave, they put the radio, a light, and a heater on for me. I sat in my Safe Cave and watched for a long time. The sun went down. The refrigerator wasn’t humming and rattling like it should. I could hear the wind blowing leaves all over the deck outside and pine needles hitting the roof. The spiders were spinning their webs and the earth was spinning around the sun. I was cold.

I went to the sliding glass door and looked out. Usually they leave the door open enough so I can get out to pee and poop. It was closed. I didn’t have to pee or poop, but it was very dark. What would I do if I had to pee and poop? That made me scared. I couldn’t see anyone. I couldn’t see the cars. It was very very dark and the leaves were blowing around everywhere and I was very scared.

They didn’t like me anymore. They abandoned me. They took my food bowl. They took my water bowl. They hated me. They abandoned me. I understood. I felt so bad that I let them down. They were all my friends. I wanted to say I was sorry and I would never do whatever I did again, but they were all gone. They left me at the cabin until spring. I would most certainly die.

It was so comfy I fell asleep.

When I woke up, Don was rubbing my head and saying things softly. Max and Auggie were running around getting toys out of the bin. Liana was covering her mouth and laughing.

They got me out of the cabin and into the car. Then we went to the Barrel House downtown. Did you know they named it “Buddy’s Barrel House” after me? They lifted me up the stairs to the second floor and we all had dinner. I think Don gave me more kibble than usual. Then all us dogs had our medicines and we climbed up on the couch to watch a movie and Liana gave my head super-long rubbies and there were snacks during some of the commercials.

In the morning I was still on the couch and it was warm.