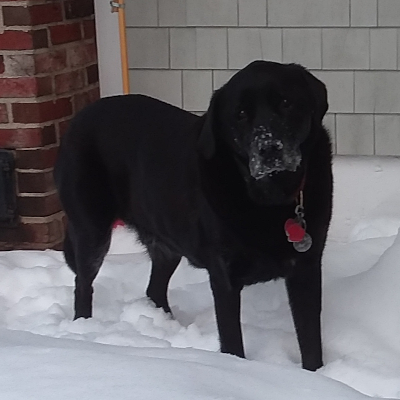 This place is so stupid. “Chez Salty” is so depressing and stupid. The only person I like is Liana. She’s the only one here who’s smart. I can’t believe she likes all these idiots. Why doesn’t she run away into the woods? I hope it’s not because of me. All Liana needs to do is give me the word. Hopefully she’ll bring a bunch of towels because I hate going out in the rain.

These dummies can kiss my Farmington grits.

When I’m with Liana, I don’t need dinner. When I’m with her, I feel just DREAMY! I don’t need breakfast or balls or squeaky toys. I bring her my favorite squeaky toys and she marvels at them. She gently strokes my head when I eat. We go for little walks. She lets me lie on the floor by her feet whe she works. When she looks into my eyes, I just melt! She must be part Australian Shepherd because her eyes are blue. I lose myself in those eyes. Even if she’s angry with me for trippng her up. I can’t help it. I want to be by her side forever and ever. I would follow her around the world. I follow her around all the time. Bipeds are always changing directions when they walk… this way, that way, turn around, step on my paw, step back, yell at the dog… They’re like gigantic squirrels on two legs. How did they even evolve?

But I forgive Liana every time she stepped on my foot. EVERY. SINGLE. TIME.

Liana and I share something special. Something the rest of these beasts can’t even guess at. I’ve never felt this way about anyone or anydog before. It must be love. How do I know when it’s love? How does anydog?

I’m sure I’d have a better chance to tell Liana how I feel if these clods weren’t around all the time. They are so frickin’ demanding and useless. They can’t see she’s a delicate flower who blossoms in kindness.

Don is the worst. Sometimes he gets so close to her I’ll have to wedge my head between their thighs. I’ll look up at her to see if she’s OK. I can see the gratitude in her face with that beautiful smile. Don is repulsive and plays Hide-and-Seek with my squeaky toys. He’ll squeak it, then hide it. And when I forget about it, he’ll squeak it again and pretend like he doesn’t have it. I hate that guy so much. Except when we go on super-extra-long walkies or he gives me a pig ear. Dunkin Donuts is pretty good, too. But that’s it. Don must go.

Max is pretty stupid when it comes to Liana too. Not as stupid as Don, but pretty close. Max is always trying to get on Liana’s good side by jamming his snout in her crotch or being happy and wagging his tail helicopter-style. What a phony. Yet she falls for it every time. She gets all happy and rubs his butt like he was Einstein or something. Dummy Einstein more like it. I wag my tail much better than he does. My tail is bigger, too. And when I wag MY tail, I mean it Max.

Buddy takes up the most of Liana’s time. It’s clear she isn’t happy about it. Buddy’s old and he pees on everything. He barks in the middle of the night. And he stinks. The poor dog barely knows where he is. Liana is usually moving him around or washing something he peed on. Sometimes I have to step in and growl at him so Liana can get some rest. But then Buddy pees on the floor, making more work for her. You can’t win with Buddy.

Auggie is pretty cool. He doesn’t take any crap from anydog. I wouldn’t want to mess with him. That’s why when he nudges me away from my food bowl I just go into the other room until he’s finished. There’s never anything left. It’s OK. I like Auggie more than food.

Auggie’s pretty strange. He takes up a lot of Liana’s time at night. He’ll get right up in the bed and “snuggle” with Liana. Sometimes he’ll sleep on the bed all night. That’s just way too much time with Liana. It’s not fair because getting on the bed is stupid.

I don’t dare growl at Auggie. I think he would bite my face off. He also follows Liana around, which is my job. I don’t care if Auggie has been following Liana around for longer. I follow her around better. Auggie won’t even force the bathroom door open to see if she’s OK in there. He’ll never jump into her lap when she’s driving. What an amateur. And he also brings the ball right back when she throws it. How stupid can you be?

When I growl at these clods, Liana gets angry. That poor princess! She’s obviously brainwashed. Why can’t she see that we’re meant to be together? If only she’d ditch these pinheads. She’s the woman for me. I would make her the happiest Biped in the world if only she’d be my number one. It hurts so bad to be in love with someone who doesn’t even know you exist except at mealtimes.

I need to get Don out of the picture first. Maybe I can set him up for Murder One. With some luck I might be able to get him into a coma for the next five years or so.

That would help a lot.