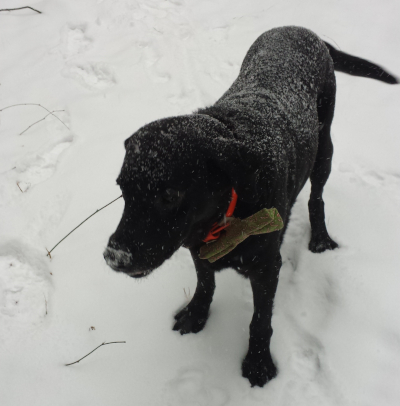 Hi everyone! Thanks for reading my blog!

Thank you to everyone who wished me a Happy 15th Birthday in November. I understand if you didn’t wish me a Happy Birthday. It was almost on Early Bird this year and everyone gets excited for Early Bird.

I spend a lot of time asleep these days. Don says that when I’m not sleeping, I’m either peeing or pooping. Or I’m making more pee and poop. I’m so old I don’t even go on a walk around the whole house like I used to. All I can do is pee and poop as close to the ramp as I can and come right back up the ramp and into bed. Don jokes that he is jealous.

Sometimes they bring Max and me to a nice lady named Ruth. Max loves Ruth so much. He runs right in to see her. I can’t run anywhere. Ruth does things to my back and sticks a bunch of needles in me. I always get scared when I see the needles. But Ruth is so nice and she says nice things to me and gives me little treats all the time.

When Ruth pulls the needles out of me, I feel very good! I feel like I can walk around the whole house like I did in the old days. But when I get back to the house, I usually go to my bed and take a nap until dinner. Then I go to sleep after that.

The next day I feel very sore and I can only pee or poop on 1 or 2 things in the house. Usually, I try to pee or poop on 4-5 things. But I don’t see that as a wasted day. No! I look at it as an opportunity to pee and poop on 6-7 things the following day.

In my last blog I told you that I would most likely be in Pownal all winter with either Don or Liana because I can’t get up the stairs to The Barrel House. But Max is 13.5 years old now and can’t get up stairs either. And Teddy won’t even try. He’s only 10 years old but he won’t go up any stairs. Don calls him a Dum Dum. I think it’s Don’s Way of calling him Big Dumb Teddy.

And even Auggie has trouble getting up the stairs to The Barrel House since his surgery. But his dinner is up there. Auggie wants his dinner so much, he makes it. I don’t know how long Auggie will be able to go upstairs.

Why do Bipeds even have stairs at all? Why do they build homes with stairs? Just to keep the old or sick or dumb dogs like Teddy out? That would be terrible. I don’t understand Bipeds.

One night it was just me and Don in the Barrel House. Don leaves me on the ground floor in a very big dog bed with a lot of water.

Sometimes, I get scared in the middle of the night because I can’t see very well and I can’t hear very well. When I am scared I wake up and I don’t know where I am and I start “Yarkowling.”

When Don doesn’t wake up I’ll have to pee and/or poop in my bed. On this night I am writing about, Don came right down in his pajamas and he helped me out of my bed. We walked outside and we went out on the lawn. I didn’t have the heart to tell him that I already peed my bed.

The night was very cold. I felt sad for Don in his pajamas. I kept staring at the bright lit-up dog on the lawn (Editor’s note: It was all the Christmas lights on the dog sculpture on the lawn). I guess I was looking at it so hard I fell over.

After a minute, Don came running over and helped me up. I think he was waiting to see if I was going to rub myself on the ground like I do sometimes when I’m very itchy. I wasn’t itchy. But I couldn’t get back up.

Don helped me up and I tried to pee, but I just couldn’t. Probably it was because I just peed all over the bed in the house. But I tried to poop and that made me fall down again. I can’t squat like I used to. Don picked me up again and he waited for me to poop. As Dog as my witness, I didn’t have any poop in me then!

We walked back to the stairs to the Barrel House. I can’t get up the stairs by myself anymore. Don reached down to lift me up. He put his arm underneath my belly and lifted.

THEN I had to poop. It felt like I was a tube of toothpaste. My poop was very runny and it went all over Don and his pajamas. I was very sorry. I didn’t want want to poop all over Don.

When Don was muttering to me, two Boothbay Harbor police officers came around the corner. The officers asked Don if there was a problem. Don turned around and yelled at the officers; “THE PROBLEM IS THAT I’M COVERED IN DOG $h1T!!!!”

This is why people don’t like Don. He yells cuss words all the time. If he hadn’t yelled a very bad word at the officers, they probably would have helped wash Don’s pajamas and clean up all the poop. But Don yelled at them and used very bad words. So instead of helping, one of the officers said “Okey Dokey!” and they both walked off down the street. Don doesn’t have a lot of friends.

Don was in an angry mood for the rest of the night. He brought me over to the hose and washed the poop off me. He must have been very cold with that hose water spraying all over his poopy pajamas in that very cold night. Don doesn’t have fur to keep him warm.

When he was done, he brought me inside. He went outside and cleaned the poop off the front deck and walkway with buckets of water. Then he put the bed I peed on in the washer with his pajamas and a bunch of Skout’s Honor laundry cleaner. It was strange seeing Don naked on the first floor of the building. He looked very cold and very tired. I think Don should have a fur coat. He would look a lot better and maybe that would make him less angry in the winter.

Don went upstairs and took a long, hot shower. When he was done, it was light outside and he came downstairs to feed me.

He didn’t take me outside again until he had to open the store at 10am. He looked very tired.