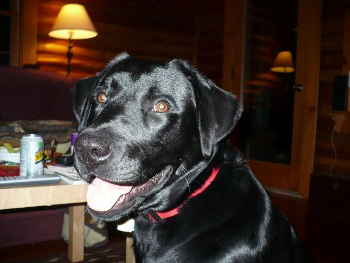 The Peculiar Rules of People – by Max

And that got me thinking. Collectively, you Bipeds are pretty odd. And I say that with great affection. Some of the things you’ve created are absolutely magnificent. Like dog food, the ocean, treats, and big comfy couches. But some of the things you do are downright peculiar. Not wrong, mind you. Just peculiar.

Peculiarity #1) Like why do you keep all your food in that Big Cold Silver Thing? It would be much better if you buried it in the back yard until you really needed it. Burying it has the advantage of really seasoning your food. It also puts you in touch with Mother Earth. And I could dig it up when I’m starving which is most of the time.

Peculiarity #2) Why does everyone in your world get a turn or a treat? In the dog world, the fastest, hungriest, and/or most clever dog gets the most of whatever is up for grabs. Don and Liana will make us dogs line up and give us each a treat one at a time. And they do it for dinner too! Can you imagine it? It’s excruciating! In the wild, if I see a half eaten ham sandwich on Townsend Ave, I chomp it down as quickly as possible. There’s no way I’m going to share it with Auggie or Buddy. If Buddy found the same ham sandwich he would be so slow that Auggie and I would rip most of it from his mouth. Buddy certainly wouldn’t allow it if he could stop it. And he couldn’t. That’s the definition of a dog eat dog world, if you ask me. And I’m a dog.

Peculiarity #3) Sometimes when Don is not paying attention he’ll accidentally step on my foot or knock into me harshly. When he does, he will drop what he’s doing and apologize to me in a high pitched voice. He’ll rub my head and ask me if I’m OK and inspect the body part he mauled. Sometimes he’ll even give me a little treat. The dog world has none of this. In fact, us dogs are always trying to shove each other out of the way. And if I should shove Auggie or Buddy down the stairs whilst jockeying for a butt-rub, I certainly wouldn’t go running down the stairs to see if they’re OK. Especially because I’m that much closer to getting a butt-rub.

Peculiarity #4) It’s no secret that Bipeds are skimpy with food. We only get a measly cup of food in the morning and one in the evening. But did you know that they’re skimpy with everything? Trust me. If you are a dog and you had seen what I’ve seen in The Forbidden Shed, you would revolt immediately because you should revolt.

What is so amazing about the Forbidden Shed, you ask? It contains everything needed to fulfill the dreams of all dogs. Tons and tons of food. Treats by the bale and in every imaginable flavor. Squeaky balls, fetch balls, tug toys, stuffed toys, and even buttscratchers (Editors note: Undercoat rakes and combs).

Why do the Bipeds keep this bounty to all Dogkind locked up? Why do they dole it out to us in one-cup allotments like slaves? Because they’re peculiar, that’s why. It’s nothing personal.

The Bipeds meter their own food and treats out in an maddening way. First, they only take a tiny portion of the 100’s of pounds of food out of the Big Cold Silver Thing. Then they heat it up and play with it so agonizingly slowly that it can drive a dog stark, staring insane. After playing with it for hours, they put it on glass things and use shiny things to delicately put tiny pieces in their mouths. The whole time they’re using awful-tasting “napkins.” And they absolutely refuse to share.

If I ever get into that shed unsupervised I’m going to eat until I can’t get my belly off the floor. Hate me if you want, but so would Auggie and Buddy. So would Don (Editor’s Note: Only to make the dogs jealous).

Peculiarity #5) Auggie is right when he says you Bipeds are Deadnoses. You can’t smell anything. If you want to mace yourself with scents, be my guest. But my toes will curl and I will definitely resist you if you try to shampoo me in flowery-scented glop. My sense of smell is 300,000 times what yours is, so when you put a teaspoon of that stinky shampoo on me it smells like you’re putting 325 gallons on me (Editor’s Note: Max’s math works out).

That’s why, no matter how much I love frolicking and loitering in all forms of water, I will fight to the end to avoid a shampoo unless it’s Mutt Nose Best. No matter how many treats are involved.

Rolling in poop, sniffing other dogs butts, and eating rotten things are exceptions to the smell rule because they all smell so darned good.

Peculiarity #6) I don’t understand why all you Bipeds stare at screens all the time. Big screens, small screens, medium screens, loud screens, quiet screens, people laughing at screens, people getting mad at screens…. Sometimes Don will have 3 screens he’s paying attention to. There’s hardly any time for a butt-rub, walk, or snuggies anywhere in there. No treats, either.

I’ve seen all the things you guys watch on the screens and I don’t get it. What’s the big deal? What’s so great about watching cars drive around, people talking, explosions, baseball, and The Kardashians? Surely you get enough of that during the course of your regular day. If not, why don’t you just drive the car around more, talk to more people, explode more things, play more baseball, and go over to the Kardashians house more often?

And would it kill you to put something about insolent squirrels or dog butts on your precious screens once and a while so we can all watch?

Peculiarity #7) Why do all you Bipeds lie around all Sunday? Sundays are the best times to go walkies! I understand that the Bank, the Vets, Grovers, and Slicks aren’t open (Editor’s Note: Notice that he mentions all the treat-giving places in Boothbay Harbor). But there are all important Family Walkies, swimming, snow belly sliding, foraging, and bellyrubs. There are things to do! Stop watching your stupid screen Sunday TV marathons like “Dog the Bounty Hunter” and “The Three Stooges” and lets get outside! There are butts to sniff, oceans to swim, sunny days to live together to the fullest, and all kinds of people and dogs to meet. Am I reaching you Bipeds out there? Do I need to poop on the carpet until you get the message?

Peculiarity #8) I had “booze boats” in my notes but I have no idea what that means now. Auggie may have put that there. How peculiar.