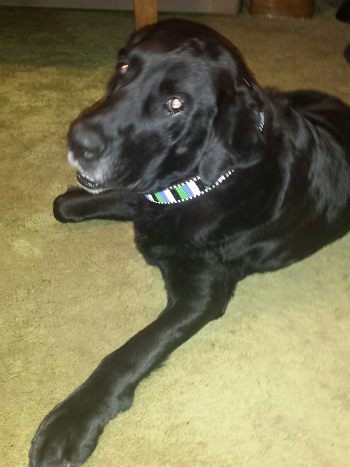 I don’t lead a very exciting life. The high point of my typical day is that I get fed and then I get to swim in the ocean. Don says I would drown if you dropped me off a dock. And that’s because I’m pretty arthritic. I keep my paws lightly on the bottom and pretend to swim. And then I have dinner.

My life is pretty good. Don will leave me out on the floor of the shop a lot and I really like it. I get to meet everyone and everydog. I used to be kept out back because I would pee every hour (Editors note: PRECISELY every hour) in the shop. And one time I pooped in the shop. It was a pretty big and stinky poop. I couldn’t help it. Customers ran out when they saw it. Or smelled it. I don’t know. I went to sleep in my Wine Barrel Dog Bed after it happened, so I don’t really remember what everyone did after that.

So it was wicked confusing when this Crazy Lady came into the shop when I was the only dog there. It was June and I was breaking out with my pollen allergy. My pollen allergy gets pretty bad in the spring. Pine pollen. Flower pollen. Grass Pollen. Tree Pollen. Pollen. Pollen, Pollen Everywhere… I can’t get away from it and I can’t help but itch. And when my eyes itch, I scratch my eyes. I’m not a very complicated dog!!!!!

You should have seen me when Don and Liana first got me. I had no hair on either side of my face because of my scratching. My paws were bare because they were so itchy I would nibble them all the time. Sometimes I would bleed from my scratching and nibbling and I wouldn’t even know it. And I stunk pretty bad. I was a complete mess!

Don and Liana put me on a different food (Editors Note: Grain Free) That helped so much! Hardly any scratching. Then they put me on another food (Editor’s Note: Limited Ingredient, no chicken). I felt so much better!! And it was delicious! I was even running a bit. I hadn’t done that in years.

The Crazy Lady was talking to Don about food. The woman kept saying Don should switch my food. She said a lot of things I’ve never heard before and said that Don should feed me them. Don kept saying nicely that he switched my food and that I was itching because of the pollen. Don was getting frustrated because the Crazy Lady wasn’t listening to him. I know that because he started speaking to her very slowly. She kept interrupting Don and telling him things that didn’t make any sense. Don kept speaking slowly but louder. The Crazy Lady kept talking over Don.

She sat down on the floor of the shop next to my Wine Barrel Bed and started to rub me and talk to me. She stuck her face right into my face. She was saying things in my ear like “I’m sorry you are here,” “I wish your human was good to you,” and a lot of other strange things. I think she was crying. Don didn’t get angry because a lot of people came into the shop and wanted to get stuff. The Crazy Lady stayed right next to me.

And then Don got mad. He said the Crazy Lady was making me itch and to stop it RIGHT NOW. And then he called her a “Flake.” I don’t know what a Flake is, but if Don calls you it when he’s angry, it’s probably bad. He calls me “Big Dumb Buddy” when he’s angry with me like when I pooped inside.

The crazy lady gave me a hug that almost hurt me and she ran out of the shop. I think she was crying.

Don came over and patted my head. He said “You’re a good dog, Buddy,” and he gave me a little beef liver treat. My favorite.

I tried real hard not to scratch my face the rest of that day.