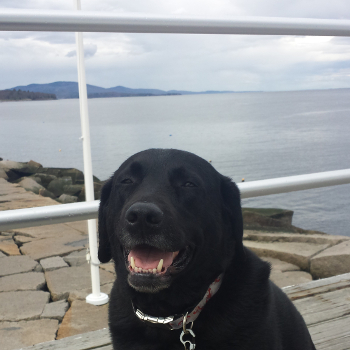 Vetting the Vets – by Auggie

Salutations, depraved quislings. Be seated. That is an order.

When I heard we were going to “The Vets” the other day, I thought I would spend the day at a local VFW, drinking cheap beer with the heroes of our nation. Nothing could have been further from the truth.

No doubt you have heard about terrible animal cruelty in the newspapers and gazettes. What I am about to reveal is an organized cabal of animal abusers on an epic scale. I shall most likely be the target of assassination upon this blog’s publication. I may be in need of a safe house. Please PM me if you will allow me the sanctuary of your pedestrian keep. You shall be thoroughly rewarded should your house be up to my exacting standards. Don’t bet on it, though.

The day started like any other–breakfast, medicines, walkies and sopping Biped adoration for Max, Teddy and Buddy. I am an island, and thus left alone with my brilliance. [Editor’s Note: Auggie is a little wiggle-butt and snuggle-love in the morning]. Then all us dogs were roughly plied into the awaiting cattle cars. I found myself alone in the truck with Don. Naturally, I suspected perfidy after my previous international kidnapping.

It was far, far worse than any kidnapping Don could have orchestrated. Don is a stupid, blunt man. Yet, he is not capable of cruelty.

Don and I drove for almost an hour before disembarking in front of a rather plain brown building. The surroundings smelled as though a thousand animals relieved themselves in fear. Don affixed me with the traditional unnecessary leash and we moved boldly towards the entrance.

Once inside, we approached an imposing wall with two Biped guards installed at either end. The wall was secured with barbed wire and the automated machine gun turrets affixed to the ceiling were plainly visible. The Bipeds at the wall questioned Don severely and at length before allowing us to retire on an extremely uncomfortable bench, well within view of the turrets.

We sat there, Don and I, on that uncomfortable bench for what seemed aeons. Bipeds and their simple companions came and went. The sun moved higher in the sky. I was expecting the heat death of our universe before being called upon by a fierce-looking Biped with numerous scars on her face and an unnerving falsetto. Don and I got up off that excruciating bench to meet our destiny.

The cubicle we entered was small, slippery-floored, and disinfected. It was silent, save for the occasional dampened commotion that filtered in from that cursed waiting room. After what seemed several lifetimes in that Hellbox, “The Vet” casually rolled in.

Whatever hopes I had of sharing a beer with a grumpy, battle-tested Vet at the VFW were immediately squashed.

“The Vet” opened the cubicle door and greeted us with officious cheeriness. She had long, stringy hair and what looked like some kind of tomato soup or sauce down the front of her smock. I’m giving her the benefit of the doubt in that it wasn’t any poor creature’s blood. It seems hard to believe that she missed her mouth with food considering her midsection was as soggy as a partially-deflated blimp. And the Coke-bottle glasses weren’t doing her any favors.

I began to doubt whether “The Vet” had any military experience at all.

She began a rapid-fire inquisition. Don attempted to interject a few garbled words here and there, but he was shut down like a cottage on Columbus Day. As “The Vet” ended her unbearable soliloquy, she engaged me with that phony, dripping falsetto and she gratuitously stroked my fur. I girded myself against her lightning strike that would result in my capture. And I’m sure that once captured, I would be in her clutches until my wretched, humiliating death.

She continued speaking to Don in measured, condescending cadence as she ran her hands over my body. My suspicion built as she looked in my ears and squeezed my wee-wee. She offered a treat, and when I leaned over to accept, I felt the blinding pain of a needle at the back of my head. I swung to defend myself, but she was quickly needle-less and feigned a sympathetic smile. The drug quickly took effect. I began to think this was the end of everything Augustus Megatron Bulldozer [Editor’s Note: It was a Lyme Booster for Dog’s Sake].

When I was completely disarmed by the drug, I was quickly led by “The Vet” to a back room where a cadre of gap-toothed hillbillies gathered to inflict their terrors upon me. Don jumped up with a shout and tried to save me as I was forced from the cubicle, but he was savaged by “The Vet’s” brutal jackboot [Editor’s Note: ????? I have no idea what Auggie is talking about].

I was cut off from the world I knew. They sensed my fear and they took full advantage. I was helpless. I was vulnerable. Dare I say, I was Don-less. They proceeded to ravage my body in the most dreadful ways. It was animal cruelty at its most debased. I struggled. I fought. I was beaten. I begged for mercy…. [Editor’s Note: Again… ???????]

I shan’t discuss the details of my violation suffice to say that it was a specific orifice of mine that is intended to be EXIT ONLY. I intended to keep it that way for my entire life, but that dream was taken from me [Editor’s Note: Auggie just had a routine anal gland expression]. I can only relay my experience with “The Vets” to you and hope you have enough common sense to heed its blatant warning. So be warned thusly: Bipeds lead you to believe Vets are life-risking heroes with interesting stories and worthy of our respect. In truth, Vets only want to bugger you.