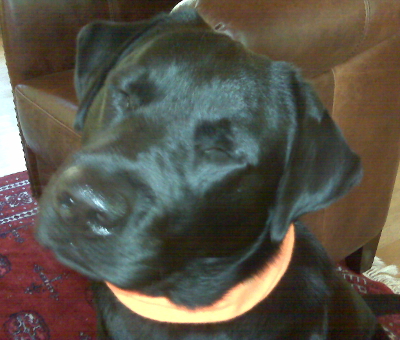 Don Sure Is Getting Old and Fat – by Max

Hi there! Max here! I am just fine, thank you!

I don’t want to shock any of you, but Don may be near the end of his days. I never thought he would get old. Yet Liana and I are talking about doing what is best for him at this time. We are very worried and bringing him to the vets this week. He may have dementia and a torn ACL. It’s doubtful whether he would survive the anesthesia needed for ACL surgery. He’s way too fat.

Late one night, Buddy had to go out and pee. Don let him out as usual, and as usual, Buddy couldn’t find his ramp to get back up into the house. He sat at the bottom of the stairs yelping forlornly (Buddy, not Don). Then Don came out of the bedroom and he fell down the stairs. He made a sound I don’t care to hear again as he hit the garage floor. Buddy was terrified and quickly hobbled over to his ramp and into the house. Don lay sprawled out on that cold concrete floor for a long time making whimpering noises. Teddy came down and licked Don on the head and curled up next to him on the cold concrete floor. I went back into the bedroom and took Don’s warm side of the bed. Without Liana there, I had plenty of room to stretch out.

Don spent the next couple days either in bed or on the couch. NO WALKIES!! He shoveled the most awful food into his face and fed us erratically. The house was neglected and laid waste with dirty laundry and dishes. He didn’t shower. He didn’t answer the door when the postman showed up. He walked around with Swiping Sticks under his arms and a big Dog-Kicking Boot on his left leg. He was out of control. Us dogs gave him a wide berth until Liana showed up and humored him as he ranted against Buddy and all us dogs. Liana took us on walkies.

Don didn’t even wear PANTS for two months, for Dog’s Sake! Not even at the shop! Liana must have put her foot down because he wears pants now. The Swiping Sticks and Kicking Boot are gone, but he still waddles around in an old pair of shoes with the laces pulled out of them. He looks like a pathetic, fat, old rapper. Liana must be so embarrassed.

And there are other reasons Liana and I have been eying Don warily. Don used to enjoy so many things. He hardly enjoys anything anymore. He just plants his big butt behind his computer all day. He doesn’t even put Red Sox baseball on the radio. He used to love going out to all the Boothbay Harbor bars all the time, but he never goes to them anymore. I bet all the Bipeds at the bars don’t like Don. Sometimes over the winter he would bring me out to the bars and the Bipeds liked me so much better. I got waaaayyyy more treats and not one Biped gave Don a buttrub.

Don hobbles around his empty shop with a mask over his face. And let’s face it (No pun intended) the shop is empty for the same reason Don doesn’t go to the bars anymore – because Don treats Bipeds like he treats his dogs – awfully. He has insulted all his customers, and he’s so embarrassed he doesn’t want to show his face around his own shop. That’s what happens when you treat your friends badly, Don!

One day I was asleep in my wine barrel at the shop and I heard a big “CLUMP” in the back. Don started yelling and swearing. He didn’t know there were Bipeds in the shop, even a couple small ones. He eventually apologized to them, but his sputtering sounded like a fat sausage in a hot pan. I had to get out of my wine barrel and wag my tail and make sure those Bipeds didn’t get angry and write a scathing Yelp review. Haha! Yelp.

The Masked Don doesn’t even realize when he’s at the shop anymore.

Am I a horrible dog for laughing at an old, crippled Don trying to chase down an even more old, crippled Buddy? And losing? It happened, and I laughed so hard I almost threw up my breakfast. And I never throw up breakfast.

They were on the lawn across the shop and Buddy, as usual, left a big poop. Don was bagging that big poop when a couple of Buddy’s braincells shorted out and he started “running” towards the road. I put running in quotes because Buddy is blind, deaf and terribly arthritic. But he was pulling away from Don. Don cursed up a truly magnificent maelstrom as he doddered after “Blazing Buddy” with a warm poop bag in his hand. The swearing got better and louder as Buddy got closer and closer to the road. Don hobbled frantically and tried to grab Buddy’s collar, but a burst of Buddy-speed left Don solidly in the proverbial dust. Luckily, Liana ran over and coaxed Buddy out of the street. It was like watching handicapped turtles in a slow motion race across I-95.

In fact, I think his furtive chase after Buddy on the lawn was the most exercise Don’s gotten for two months. I am not embellishing. I also watched Don eat a half fried chicken with all the fixings by himself, without even sharing a little bit. No matter how much I stared at him. In fact, the only time Don’s mask comes off is when he’s cramming his maw with gobs and gobs of food that he’s not sharing.

I remember when Don could seamlessly police us four dogs, two employees, and a packed shop full of shoplifters and screeching little Bipeds. It was a beautiful symphony of Biped determination, restraint, and control. Today, I watched a masked Don shuffling aimlessly around an empty shop, hopeful that someone/anyone would ask for directions.

I am embarrassed that it took so long to notice Don slowing down. I always remember him as a bright, vibrant Biped with infinite energy. But sometimes it takes a single snapshot in time to give clarity to decades. That epiphany for me was that Bipeds are not immune to the ravages of time.

I owe a lot to Don. I truly love him. But he has been eclipsed. I don’t want to sound like Auggie and his subscription to violent overthrow. I am merely asking for reasonable heads to prevail in Don’s difficult transition.