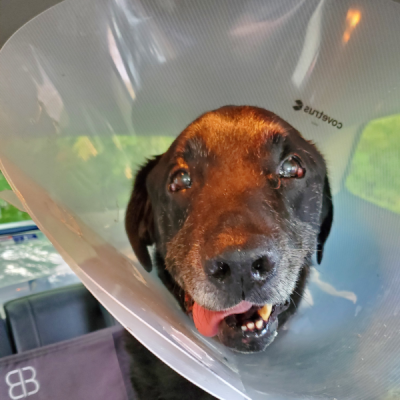 [Editor’s Note: We’ve been trying to get Ted to write a blog since we got him in April 2019. He stubbornly refuses. However, we found his diary. He calls his Diary his “Diarrhea.”]

I’m sorry it’s been so long since I’ve written. There’s been a lot going on here and I’m not sure what I’m going to do. Things sure have changed. I think Don is trying to kill all us dogs. And probably Liana, too.

First Buddy disappeared last June. Then Max disappeared this March. I hope they escaped to a better place. This place sucks rotten eggs.

It’s strange being the oldest dog in this miserable pit. I feel like my head is always on the chopping block. Like I’m the next one to get offed by Don. And Don is a psycho capable of just about anything stupid. I get so angry just thinking about that whiskey-soaked bloatworm.

Not only are Buddy and Max gone. Now my jaw is gone, too. Well, technically half my jaw is gone. Don must have done it. He thinks it’s funny that I only have half a jaw. He used to call me “Small Head Ted.” Now he calls me “Half-Jaw Ted.” Sometimes he tells people in the shop I’m “Half-Jaw, Small-Head, Teddy Spaghetti.” I hate Don so much. But without a jaw, all I can do now is fart upwind of him.

[Editor’s Note: Teddy had cancer in his lower jaw and had half of it surgically removed to keep the cancer from spreading.]

Having half a jaw is a problem in so many ways. But I’m grateful the maniac left me at least half of it. How else would I drink out of the toilet? I can’t even eat the same food I used to.

Liana is so patient with me. She knows I need to eat. A couple times she fed me kibble in my bowl, but that sprayed on the floor everywhere. Marz ran over and tried to eat it up. Marz must be brain damaged because Don and Liana yelled at him to stop, but he never does. He didn’t stop that time until Don threw a couch pillow at him. Then he yelped and ran off into the living room like a hyena. But he was back watching my food and drooling only a couple feet away. Marz is stupid. I hate him almost as much as I hate Don. Maybe more than Don.

Then Liana fed me kibble by hand. That took forever and it was absolutely WONDERFUL! We really bonded! Marz was so jealous. Liana knew the proper timing to give a dog with half a jaw a handful of kibble. Of course she did. She fed it to me with such care.

But Liana is a busy woman, and she couldn’t keep up with my ravenous appetite. I think that’s why I love her so much.

She fed me canned food in my bowl. It tasted much better, but it went all over the place. Even the drapes got stained and had a bazillion flies on them.

After I was done eating, Marz and Auggie came in to lick everything like a bunch of refugees. They even sucked on the drapes and the carpet. But they couldn’t get it all, and now my feeding station smells like a pile of Buddy’s crap. And flies were flying all over everything.

Liana hasn’t tried to feed me canned food by hand yet. I don’t think she ever will. She knows it would go everywhere and smell like an even bigger pile of Buddy’s crap.

But the worst thing about this frickin’ prison is that little red punk Marz. I have no idea where he came from, but he’s always a piece of bad news. I think Buddy and Max found out about Marz and just ran away. They were smart to do it. Marz is a frickin’ nightmare. I hate him worse than having half a jaw.

He’s always running up to me and licking the side of my face without the jaw. God, I want to bite him so much! He’d get a bite in the face twice as hard if I had a full jaw. He’s so lucky I only have half a jaw. That little reprobate. I’ll get him yet.

He’s always running around with a stupid smile on his face and slamming into me and everything else. He always runs everywhere he goes. And he barks all the time. Always at nothing. Seriously, it’s like kindergarten for dogs with damaged brains around here.

Auggie used to bite Marz all the time. It was so awesome when he bit Marz on his first day at Chez Salty. Marz just cried and cried and cried until Don and Liana took him to the Emergency Vet. They thought his jaw was broken. They doped him up at the emergency vet. I think he’s still doped up.

Auggie is so frickin’ awesome.

Water is so stupid. If it’s not cold and in my water bowl, I hate everything about it. But Auggie loves the ocean so much and Auggie is so cool. He bit me once when I tried to take his dog bone. I think Auggie has bitten everyone who has ever been in this stupid family. Auggie is cool.

Now I try to go swimming in the ocean like Auggie. But every time I try, my mouth fills up with water. It tastes salty and awful and sometimes some seaweed gets in there and I barf all over the place. Most of the time I just end up pooping in the water. I love pooping and peeing in the water because it’s so relaxing. I used to do it before I lost my jaw. But Don gets upset. He says it’s disgusting and he’ll try to get the poop out of the surf with a poop bag. Most of the time he can’t get it because the water is too deep for his boots and my poop dissolves very quickly. Or, if he’s in sandals it’s an ebbing tide, my poop just floats out to sea. Heh heh! I hate Don. It’s my poop, Don. But it’s not my fault because Don gives me a Metamucil biscuit after every meal because I couldn’t poop for 5 days a while back and I almost died. I guess that backfired on Don, heh heh!

I’m still working on my plan to get rid of Don. Here are the contenders:

I LOVE these newsletters! A much needed laugh after a long day.
I can’t wait to be in BBH next week and visit Two Salty Dogs!

Thanks Erin! It’s a labor of love! See you soon.

Your Big Daddy Don wrote in his mind numbing blog…. You’re not feeling well and I want to say “vets suck”, next time just hold all your gas until you arrive and then…..💩💥there he blows….hark💥💩…. that’s what I do here at 🧓Olde Ladies Inn🧓.

Thanks Laura! I think you are the blog’s biggest fan. Thank you so much!