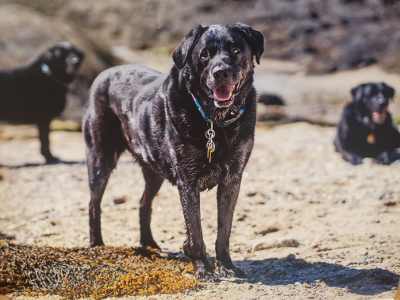 Two years after losing My Beloved Coal, I insisted we get another dog. I was convinced Buddy was going to kick the bucket any minute and I couldn’t picture life without at least three dogs. That was 20 months ago. I’m convinced Buddy is the Rasputin of our time.

We started considering puppies. We took in Coal and Buddy when they were 8 and 9. That was great, but I wanted a puppy to shake up the status quo. I wanted a doofus and I wanted to show that doofus all about life. I wanted puppy breath. But most importantly, I wanted a puppy to distract me from all my mid-life shortcomings and insecurities.

Then I thought, “My God. Maybe the puppy will be another Max. Or God forbid another Auggie.”

Then Liana and I started looking into older dogs. After a while of looking– of fits and starts and broken hearts, Old Dogs, New Digs (ODND) put Teddy on their Facebook page. Teddy’s owner passed away in Western Maine. The extended family tried to give him a home, but couldn’t, so they did the best they could – they chipped in to pay his adoption fee from the shelter. But Teddy sat in the shelter. And sat. And sat as older dogs usually do. After ODND published their Facebook post, I got 2 dozen emails from friends and acquaintances saying things like, “IF YOU DONT ADOP TEDY, ILL MAKE MY DOG POOP IN FRONT OF YOU’RE SHOP EVERY DAY UNTIL YOU DIE AND I WON’T PICK IT UP.”

So we adopted him.

The best is when I ask Teddy if he wants to go for walkies. He jumps up on his rear legs excitedly and the whole Big-Dog, Small-Head, Mismatched-Ear Thing is put into frenetic motion.

It was only then I could truly love Teddy.

None of our other dogs ever paid attention to squeakers. Ol’ Spaghetti LOVES squeakers. If a customer squeaks a toy on our wall, Small Head Ted charges over. He gently takes the toy from the customer’s hands by hypnotizing them with insistent gentleness. Teddy then runs behind the counter and places the stolen toy in a bushel basket with all his other pilfered toys. The customers look so confused. Ted looks so proud.

We knew Teddy was the dog for us and, and more importantly our shop, when every single lb of his 100 lbs was completely terrified by a 3 lb Pomeranian that barked and chased him around the shop. It was pretty funny until we realized Teddus Maximus was utterly terrified. We brought him behind the counter where he cowered behind Liana’s chair and panted for the rest of the day.

Not one single aggressive bone in his body.

Of course not everything is green grass and rainbows with Teddy EverReady. He can drive you straight to the Bug/Nut House.

—- Eddie “Teddy” Vedder will NOT go up stairs. Whoever had him before us obviously lived in a single story house. Teddy was coaxed up the stairs to the Barrel House on Christmas Eve with a lot of expensive salami and cheese we were saving for guests. After a solid month of sleeping in the cold, empty, first floor foyer, you’d think Teddy Ballgame would have hoofed his small-headed ass up the stairs for love and warmth and belonging. Liana and I tried for hours. Hours, Dammit. Nope. He won’t go up the stairs again. It was a Christmas Miracle.

—- Tedley Tea HATES Buddy – the kindest, dumbest dog on our/your planet. Teddy growls menacingly at Buddy whenever they cross paths. Teddy’s growling is unnerving, but it’s not an indication of aggression. It’s more that he’s exasperated that Buddy is so diseased and still walking around near him. I get the same creepies. Ultimately, the joke is on Teddy because Buddy is completely deaf and can’t hear Teddy’s growling. And Buddy can’t even see Teddy standing off against him and will just stagger right by him like he wasn’t even there. I can’t help but imagine Teddy regards Big Dumb Buddy as the epitome of Alpha Dog because Buddy doesn’t even acknowledge him in the slightest.

Liana and I let all the dogs out to pee in the morning and fill their bowls with kibble whilst they are out. Then we let them in the front door for breakfast. Max and Auggie career through the door to their breakfast like they’re chasing down an antelope. Buddy stumbles as fast as he can to where he thinks his food bowl is. But Teddy wanders around outside until we call him. When we finally get him inside, Teddy goes back into the bedroom looking for Liana. Then he checks out the living room. The bathroom. The garage….

The entire time Teddy is meandering around, Auggie is gulping his dry kibble and staring directly at Teddy’s food bowl. Max’s head is in his bowl, but his ears are up and his tail is wagging just thinking about Teddy’s food. Buddy eats slowly and deliberately. He can only process one thing at a time.

After Auggie gulps his breakfast, he stampedes like a Mongol Horde in a full-blown blood-frenzy towards Teddy’s unprotected breakfast bowl. Sometimes Auggie will eat his own breakfast so quickly that he’ll throw up on the way to that unprotected bowl. I have never seen a beast so tortured as Auggie running towards Teddy’s food bowl, barfing, trying to eat his own barf, and on his way to eat more potential barf.

Liana and/or I will have to perform our most severe stances over Teddy’s bowl. Most of the time we put Teddy’s mostly-full bowl on the counter and add it to his dinner.

But Teddy just poops wherever. And he must have taken a page from the book of Big Dumb Buddy – he poops all the time and he poops all over the place. One time we were all on Walkies and I had a half-roll of bags. Buddy pooped twice per protocol. Max and Aug pooped once each. Teddy pooped three times. The third one was HUGE and I didn’t have a bag for it. I tried flicking it into the woods with a handy stick and ended up getting some on my pant leg. I did what any frustrated, poop-covered human with 7 filled poop bags would do – I fled out of the forest and consoled myself that at least it was going to rain very hard for the next few days and I would pick up other people’s poop when called upon.

That’s it for now. I’m sure there will be stories from Ted’s voice. I envision a European Jock voice. Or a jock or European voice. Please email me on your vision for Teddy’s voice. Haha! I don’t care. Don’t bother.