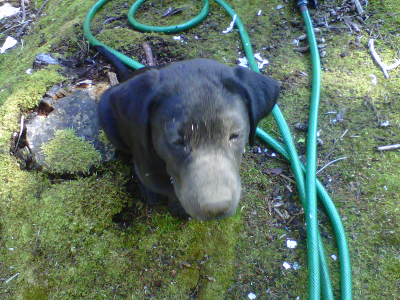 J’Accuse – “I accuse.” A bitter denunciation.

I should start by saying that my last blog was a resounding triumph in Canine Literature. Normally, my blogs are hungrily received and widely acclaimed by the top critics of the land. I have heard tell that my last blog caused several prominent critics to completely explode in a flash of literary satisfaction. I suggest you read it. Perhaps in future I shall produce another advice column. I would not bet on it, nor would I hold my proverbial breath ‘til its return.

Those of you who attend this blog regularly understand the friction betwixt myself and The Fat One (Editors Note: Max). Since I was a pup, I understood that I alone possess the mettle to command this dispirited array of duds at Chez Salty. And Max has always thwarted my efforts to claim my destiny. I have borne his slings and arrows. I have suffered his barbarous machinations. Yet even as a mere whelp, I was able to fight back against his entrenched tyranny.

We are looking through the breech at an impending “Salty” revolution. The Fat One has been listless and weak. The Fat One is winding down.

Let us, you and I, contemplate the demise of The Fat One.

In our morning battles, he will only fight me from the floor whilst I remain at my commanding position on the bed. The Bipeds think it is hilarious when I pull my paw back and hit him in the head with terrible force. They call it “punching” and I oblige them frequently by pummeling The Fat One like a largish piece of dough. The Fat One reaches up and tries to bite me with his cracked and worn teeth. They find no purchase. Nor do his war cries strike fear in my heart as in the days of yore. I remain firmly installed in the superior position on the bed.

At one time, The Fat One stole my most beloved and intimate of toys like Pink Piggy and placed them where the snow plow ground them unkindly into snow banks on our lawn. I would get so unbelievably worried when I couldn’t find Pink Piggy for months. I’m sure The Fat One gained great satisfaction in the shattering of my delicate nerves with that manoeuvre.

Come spring, my beloved toys were entombed in mud. The Fat One churned Piggy out of his wretched, filthy grave and paraded him in front of me like some kind of perverse Roman Triumph. And let me tell you right now, there is nothing you can do to mitigate the horror of seeing a loved one dug up and thrust into your face.

I have put the kibosh on those days. I am more vigilant, and The Fat One is immensely hesitant to attempt a toy abduction because of my rising power. Should I sense Max pilfering one of my cherished toys, I will engage him only to destroy and scatter the toy, no matter how much I hold the toy dear. I show no sentimentalism. I show no emotion. I grab hold of the other end of the toy hanging out of The Fat One’s mouth and I destroy it.

I would rather my precious toy meet a quick, honorable death than suffer the indignity of a prolonged and painful mud death.

All toys shall be honored when I am firmly in control.

At times when we are outside, The Fat One will attack me without warning. He will charge and bound directly at me. It is a simpleton’s attempt to scare me into running so he can nip at my heels like a common squirrel. Needless to say, this absolutely petrified me as a pup. But as the years passed, The Fat One became more predictable and less menacing.

These days, his charge is more like a drunk’s stagger. He comes to a compete halt before his ample frame can make contact with my ready defense. “Not on this lawn! Not on my watch!” is my rallying cry. The Fat One rarely attempts this pathetic charade now. It requires more effort than his decrepit old frame could hope to possess.

What’s more, I have always been relegated to second place when the Bipeds are doling out Butt Rubs. The Fat One would jostle and shove me out of the way such that his butt would get rubbed more frequently and with more intensity than mine.

In recent times I discovered that I can easily shove The Fat One away from the Butt-Rubbing Biped hands like tugboats shoving a supertanker off its berth. Short, frantic shoves are ineffective. Constant application of pressure to a particular spot on The Fat One’s dreadnought-like body will cause him to yield ever so slightly. And that is all I need to get the Butt Rubs I deserve.

Over the years, the power balance in Chez Salty has ebbed and flowed. Dogs have come and gone, yet one thing has remained steadfast throughout – The Fat One. He beat me with hammer to anvil such that hot steel was crafted to exquisite blade.

What joy did Alexander the Great feel when he crushed the Persian Empire and gazed upon the Hindu Empire, exotic and ready for the picking? And what despair did he endure when his generals revolted? As with Alexander, this exquisite blade possesses the hammer and anvil, but lacks the hot steel.

With the Fat One’s devolution, I feel I am at the edge of a precipice – gazing into the sprawling maw of an infinite void. What empires and worlds lay ripe to my majesty? What dog shall carry my legacy? Like Alexander, I am left with dimwits. I am left with Buddy and Teddy. Their very names resist greatness.

What should happen when I shuffle off my mortal coil with no successor worthy of empire? Who shall carry on the legacy of Augustus Megatron Bulldozer Kingsbury? To what purpose have I suffered The Fat One’s malice? Thus, I am forced to admit – in wielding the hammer and anvil upon me, The Fat One has passed the hammer and anvil to me.

Whom should I forge into blade? Buddy the Dullard or Teddy the Sycophant? Every scenario I envision pushes me closer to the edge of that gaping void.

The Fat One sleeps more these days. He lags behind our walks and breathes heavily. He looks at me bemusedly, mayhap knowingly. Perhaps The Fat One becomes weary with the verisimilitude he recognized long ago. Perhaps he lessens his attacks upon me, but for the realization that there is no point in forging a dead limb on a branching tree into a blade. Perhaps that is the buried genius of The Fat One – He bandies about no grudge.

It is my epiphany that my acumen should be directed towards the Toilet-Users. That is where the faults of this tragedy lay. I shan’t forgive them for providing me with simpletons as heirs.