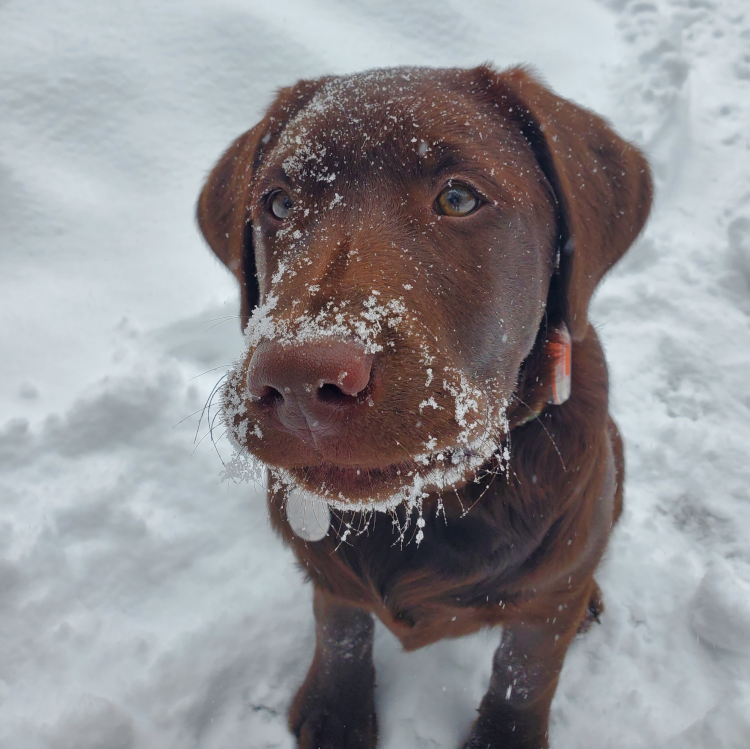 WHY BIPEDS CRY – by MARZ

The other day I woke up and it was dark!! Don was asleep!! I love him so much that I licked his face!! That didn’t wake Don up, though!! He just rolled over!! Then Auggie pawed his face!! Then Teddy came in and panted in Don’s ear!!! That totally woke Don up!! WE NEEDED BREAKFAST, DON!!! WE WERE VERY HUNGRY!!!

Don got us out on the lawn of Buddy’s Barrel House for peepees and poopies!! There was all this cold white stuff everywhere!! It was snow!! The first thing I did was eat it!! It tasted like cold water!! It was so good I forgot to poop in the rose hips bushes!! I like to get my poops as far as I can into the thorny rose hip bushes!! Don hates grabbing the poops there because his little green bag rips!! Or Don’s hands get scratched!! Don’t feel bad for Don!!! He doesn’t usually feel any pain because of his blood alcohol level!!!! Sometimes I poop two or three times in the thorny rose hip bushes!!! Then Don gets mad because he runs out of poop bags!!! That’s not my fault, Don!!! It’s a free country!!! I can poop as many times as I want!!!! It is in my civil right!

But this morning I forgot all about pooping!! That cold white snow was funner than EVERY OTHER FUN THING IN MY LIFE!! It was very cold and up to my belly and it was white and fluffy! I put my nose in the stuff and my nose got very, very, very cold!! Then I put my nose in it and used my back legs to push my nose through it! That was super-duper fun!!! Then I rolled around on my back in it!!! That was super-fun, too!! Everything about this snow was so super fun!!!!!

But Auggie wanted to get breakfast! Auggie always wants to get breakfast!!!! He said I’d get bored of snow pretty soon!!! No WAY Auggie!! Snow is the funnest thing ever!!!! And it was EVERYWHERE!!! Even in the sky!! It was coming down!! I couldn’t wait to see what the ocean looked like with the snow on it!!! I bet it’s funner than a game of tug!!! I bet you could run across it!!

I couldn’t wait to fetch in the snow!! Auggie said I was a dummy because I already fetched in the snow last year!!! I thought he was just making fun of me!! But he was right!! See the video of me fetching in the snow!?!?!? It was from when I was really, really young and small!! I could barely hold the tennis ball in my mouth!!!! I was just a baby then!!! But it was definitely me!!!!! And there was snow in the video!!! I totally forgot it!!!! That’s what happens when you get old!! You forget everything!!! Let that be a warning to all you young pups out there!!!

After breakfast, we went for a walk!! It was so much fun!!! It was at Hendricks Beach on Southport!! There was so much snow on the beach!!! But there was no snow on the ocean!! Someone must have cleaned it up like the Bipeds do to the roads and driveways and sidewalks!! But why would you clean up the snow on the ocean, you crazy Bipeds?!?!

The other thing I noticed was that all the puddles weren’t even wet!! Some joker put a cold, slippery, cover on all my favorite puddles!!!! Maybe it was the same Biped that got all the snow off the ocean! I tried to rip the covers off the puddles, but they were too slippery!!! What kind of joker would DO something like that?!? Not Auggie!!! He’s not funny about anything!!!! Don wouldn’t do it!!!! He’s too lazy!!!! So the only explanation is that there is someone in Boothbay Harbor that is putting these slippery, cold covers on all the puddles!!! They are a genius!!!!! But I hope they take them off pretty soon!!! I like to get puddle water all over me in the morning!!!!! It’s great for my skin and keeps the mosquitoes away!!

That same day we drove back to Pownal and there was a ton more snow!!! There was about a million more times snow in Pownal than there was in all of Boothbay Harbor!! Someone even left a huge pile of it in our driveway!! Why would anyone do that?!?! Bipeds are frickin’ weird!!

We all had a great time running around and fetching in the snow!! Then I started digging in the huge snow pile!! That was a lot of fun!! Liana helped me dig a big tunnel through the snow bank!!!! I bet no one has ever made a Snow Tunnel that big before in the history of the whole world!!!!

Then Liana threw the tennis ball THROUGH the best Snow Tunnel in the world!!!! My mind was BLOWN!!!! We played in the Snow Tunnel for hours and hours! Auggie didn’t want to play in the Snow Tunnel! He just wanted to play fetch the regular way!! Oh Auggie!! The Snow Tunnel was so much fun!!!!! I guess that’s what happens to you when you get super-old!!! You become a real grouch!!!!

I would have played in the Snow Tunnel all night if Liana didn’t get cold and Auggie didn’t want dinner!! Liana always gets cold!! Auggie always wants dinner!!! We all could have slept in the Snow Tunnel when we were tired instead of going inside!!!! But they went inside, and after a while it wasn’t the same. It was only super-fun if Liana threw the tennis ball!! I got lonely and went inside!!!

We had a great dinner that night with a nice little treat at the end!!! It was a smoked dog bone!! Those are the best!!!! It was the best day of my life!!!

I went to sleep dreaming of the Snow Tunnel and all the fun I was going to have the next day!!!!!

I tried just laying in the roofless Snow Tunnel. It wasn’t the same. I got soaked just laying there for one minute. That wouldn’t happen if the Snow Tunnel had a roof. I tried digging another tunnel, but there wasn’t enough snow and the snow was different. It was wet and slippery. And Liana wasn’t helping. It wasn’t as much fun as yesterday.

I heard Liana calling to me for breakfast. Teddy and Auggie were inside. Liana sounded worried. The warm rain came down over everything. The wind was still making the trees very loud.

It was then I knew why Bipeds cry.

One reply on “WHY BIPEDS CRY – by MARZ”

That sounds like the most fun ever! I’m tall for my people, but I am a Jack Russell, so much shorter than your dog family! I love MAKING the snow tunnels and getting stuck in them, but you Lab people wouldn’t fit in my tunnels 🙁 Chasing the tennis ball on the frozen water is awesome! I can slide 10 feet easily!
Keep having so much fun!
Love,
Lemon Norling