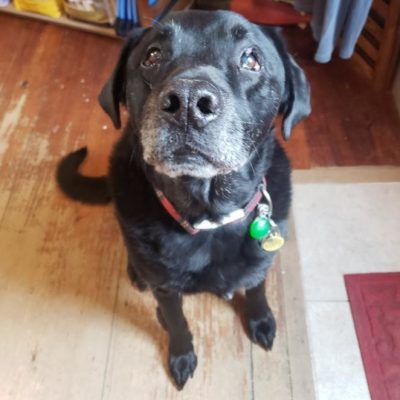 EDITOR’S NOTE: Teddy wrote this before Buddy passed. The Grand Mal seizure was one of the indications that something was wrong with Buddy. Don’t think Teddy is insensitive or cruel.

Everyone’s all worried about that idiot Buddy again. Well I’m sick of it. I always disliked that dog and now I know why. He’s a big fat old attention-grabber. Everything is always about him. It’s always “Buddy needs this,” “Buddy just got his head stuck in the screen door,” and “GROSS! Buddy laid a huge FART!!!”

Well Buddy The Dummy, others live in Chez Salty too, you know. Liana doesn’t have TIME to keep cleaning up your pee and poop. And Don doesn’t have all the time in the world to do whatever he does with you. You are just a selfish old dog who can’t get over yourself and almost never gets off the couch.

Like the seizure he pretended to have this morning – totally fake. But Don and Liana were running around being crazy over Buddy’s pathetic off-off-off-off-off-off Broadway show.

That morning Don was driving up from Pownal. Liana let us all out and we ran to the lawn. Max and Auggie went pee pee and poopie as quickly as possible and ran up to the door again so they could get breakfast as quickly as possible. Pathetic. I don’t care about breakfast, so I sniff the entire lawn at my leisure. That’s when I saw Liana bringing Buddy down the steps. Buddy did his usual slow sniffing of the bushes and went to pee.

That’s when he froze. He fell over on his side and started galloping in the dirt. His eyes were wide open and rolled back and he was frothing at the mouth. He made muffled yelps and pooped everywhere.

Poor Liana thought he was actually having a medical emergency. But I could tell he was faking. I could do everything Buddy was doing and I could do it better.

When Buddy’s act was all over, Liana sat on the steps crying in the heavy rain. She put a trash bag over that big phony to keep him dry because she couldn’t lift his 100lbs up the steps. Buddy wriggled around and tried to get out of the trash bag just to be more of a pain in the butt. Liana sat there getting soaked until Don showed up.

Don drove up real fast and ran out of his truck without a coat like he was McGyver. They talked a little bit and Don pulled the trash bag off Buddy. Buddy lay there and turned his head towards Don like a dying swan. WHAT A FAKER!!!!! Then they put the lift harness with the handles on him and hauled that big loser up into his bed. Liana took a towel and dried him off and scrubbed some of the poop off him. Don went across the street and got a bunch of high-end treats– soft turkey sausage, a beef roll, and a bunch of country bacon. Buddy got a whole turkey sausage to himself. Max, Auggie, and I had to share one. Country Bacon is one of my favorite treats. Just about all of it went to Buddy. AND I was just as soaked as Buddy, but I never got the towel treatment from Liana.

How do I know Buddy was faking? How am I so sure? Because later that afternoon Buddy was walking around perfectly. Like a doggone greyhound. Not only that, but he was engaging and charming. Just the thing you’d expect from a malingerer. Oh, and Don and Liana were SOOOO RELIEVED. They patted his head and praised him like he just won the Nobel Prize for Faking. Even Max and Auggie were sucking up to the Dumb One by playing “Bitey Face” with him. That rose the bile to the back of my throat.

You don’t see me having Grand Mal Seizures to get Liana’s attention. You don’t see me sitting out in the rain and waiting for Liana to towel dry me. And you certainly don’t see me prostrating myself to a few reprobates for  a few tasty trinkets.

Oh Liana, why can’t you see through the veil of lies that is Buddy and the rest of these pitiful jugheads? Is it because you are a delicate flower, striving to reach the sky, but cut down by the manure that buries you each and every day?

A poem for you, Dear Liana:

I ache for you.
I need you.
Why hast thou forsaken me?

The Deceiver’s work is solid,
And yet in bud.
What shall I do,
To free you?

Let the Love flow through you.
Let the Love cascade,
Like a cold mountain stream
Into the muddy estuary of my heart.

Cast away the buds of evil.
Embrace the teddy and the camisole
Within.

Let’s see Stink-O-Mutt write a magnificent poem like that! I hope everyone got the double meaning with “bud” and “teddy.” The more I read it, the more I think this is the kind of poem that can drive women wild and bring down empires! Wish me the best, Diarrhea.

One reply on “Grand Mal FAILURE – by Small Head Ted”