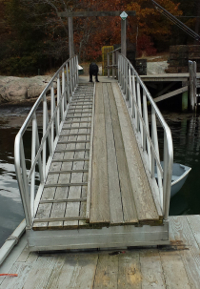 Chess King on the Hot Dog Boat – by Max

Hi there, Max here! I am just fine thank you!

Don writes a lot about what a pain in the butt I am and he’s absolutely correct. If your dog isn’t a big pain in the butt then he’s not doing his job. Just think, if you woke up tomorrow and switched places with your dog, what would you do? The answer of course is – be the biggest pain in the butt you could possibly be.

The biggest pain in the butt I have ever been was my refusal to cross the little gap between the wharf and the gangway to the boat at Newagen Landing. The gap is about two inches wide, but every time they’d bring me to the wharf, I would act like that gap was The Gap of Certain Death. I would whimper and whine and carry on like a whelp. I stretched the whole chess match out for an entire summer.

Besides, I never understood boats anyway. Wouldn’t you just want to be swimming in that wonderfully brisk ocean water? What’s the point?

When I had exhausted the Bipeds’ patience, they would become more forceful and direct. Instead of “C’mon Max… Let’s Go…” it became, “MAX. COME. NOW.” I would laugh in my furry little head at them. “MAX!!!! COME!!!!” And then “MAAAAAAAAXXXXX!!!!” as I ran over to hide behind the tourists as if Don was going to beat me. One time, after a couple of my quick dodges the Bipeds policed me up, put me in the car, took me back to the cabin and left me so they could rejoin their friends on the boat. The trashcan was in a terrible state when they returned later that evening, and Don was very angry despite having a great day on the boat.

The next time at the dock, Don put the leash on me at the car and walked me briskly to the gap. I played along until about two inches before the gap when I dug in all four of my paws. He started tugging and pulling on the leash to get me over the gap. I just dug in harder and howled fantastically. Tourists came over and demanded to know why Don was abusing such a perfectly friendly animal. Don got all huffy and told them to mind their own business.

I played along and stretched my neck towards the out-of-reach treats and whimper. Auggie sneaked over and ate the ones near the bottom of the gangway. Then people would walked down the gangway to their boats and all of Don’s carefully laid treats rained down into the water or on the dock where Auggie would raced over and scooped them up. Then he leaned out to get all the treats floating in the water and barked at all the treats he couldn’t get. Don was so frustrated that the veins in his neck throbbed alarmingly.

I got taken back to the cabin again, but the trashcan was put safely on the counter and out of reach. I climbed my big butt up on the Forbidden Couch and slept there until the Bipeds came back and shooed me off like some common raccoon.

It isn’t that the shop’s treats are lackluster. It was that Don wasn’t trying hard enough. If I gave in, Don would get the impression that I could be easily cajoled into any foolish thing he wanted me to do. And I couldn’t allow that.

So the next time we all adventured down to the Newagen Landing, Don brought a package of hot dogs with him. Us dogs never get hot dogs. He was so desperate to get me across that gap he was going to give me human food. And some of the best human food ever created, if I do say so myself.

Don’s hot dog bribing technique was the same as his shop treat technique. It was disappointing. He placed pieces of hot dog on the gangway at various strategic intervals. And by strategic, I mean no treats were placed near the bottom of the gangway for Auggie to pilfer, and the first treat, naturally, was out of my reach.

I backed up slowly and lunged at the first piece of hot dog on the gangway. That knocked the other bits of hot dog into the water. Auggie jumped in and swam around picking up all the little bits of hot dog.

For those of you who don’t know, Newagen Landing is all built up and there’s no way for Auggie to walk out of the water by himself. So Don gave the package of hot dogs to Liana and ran down to grab Aug from the water and put him back up on the dock. Auggie shook all his water off on the tourists and ran right back looking for more hot dogs. It was complete, utter, and wonderful dog chaos.

The Bipeds gave out a pack of hot dogs that day. Auggie jumped off the dock several times and Don got soaked and angry. Eventually Don gave up his Hot Dog Boat Dream and brought Auggie and me back to the cabin. Don was moody and distant the entire afternoon and he didn’t let us up on the furniture at all. He stared at us until everyone got back from their boat ride. Then he had several cocktails and he gave all the dogs a skimpy, late dinner.

I understood Don’s frustration. The dogs had won. We’d eaten a pack of hot dogs and still I wasn’t on the boat. I was on top of the world. I felt like I could milk this whole fiasco for another 2-3 packs of hot dogs before the summer was out.

The first time Don put the “lifejacket” on me I was intrigued. It was cozy. It was stylish. None of the other dogs had one. They put it on me at the car and I ran down to The Gap of Certain Death looking for more hot dogs or perhaps some pate de foi gras. Don sidled up to me with a giant smile. He grabbed the handle on the lifejacket and lifted me over The Gap of Certain Death. I was astounded. I was caught unaware.

I had no choice but to run down the gangway, across the dock and jump right into the boat. Auggie was bewildered and a little upset that there were no treats or hot dogs raining down to scavenge. Well played, Don.

It was actually quite a nice boat ride. We got our dinner on the boat and the Bipeds caught some fish, which was pretty exciting. There were treats and everyone gave us butt rubs. Altogether, it was a great time. By the way, I ran right over the Gap of Death going up the gangway after the boat ride. That really made Don’s jaw slack.

I let the Bipeds put the lifejacket on me and I walked slowly towards the wharf like I was a beaten dog. At the last possible minute I ran off to the adjacent field. They chased me all over those (Editors note: Private Property) fields and I think I picked up about 2,000 ticks in about half an hour. The Bipeds certainly picked up a lot more between them.

The boat ride was canceled and everyone went back to the cabin for tick removal and the dogs had tick baths. It took about 3 hours for all of us to get tick free. Luckily, I managed to eat enough rotten apples in the field to keep Don up all night with my gassings and soupy poopy.

The next time they tried putting that stupid lifejacket on me, my plan was bolting straight for the field again or towards the east where all the houses would make it difficult to track me down and there would be friendly people to help. Unfortunately, the Bipeds cornered me at the cabin and forced it on me. There was no escape. I was easily cornered and there were no tourists to intervene. Liana grabbed the lifejacket handle and dragged me to the car. Don had a firm grip on the lifejacket handle when he opened the car door at the Landing and kept that grip all the way to the boat. There was no escape. Auggie was running free and getting butt rubs and bits of potato chips from the tourists. It was humiliating.

It was the end. I lost. I played my cards and had done my best and gone my farthest. Unless I was prepared to go feral on Southport, the Bipeds had won. Going feral had a certain appeal, but I like warm, overstuffed couches more than being cold and hungry, covered in ticks and shot at by rednecks all the time.

I began to think about the next way I could make the veins in Don’s neck throb alarmingly.

And that’s what I did.

Editors Epilogue: Now when we go to the boat (or The Hot Dog Boat as we call it) we bring the lifejacket. Just the sight of it will make Max prance right over The Former Gap of Death and into the boat in a normal time. And by normal time, I mean non-geologic or cosmic deep time.

And everyone lived happily ever after.