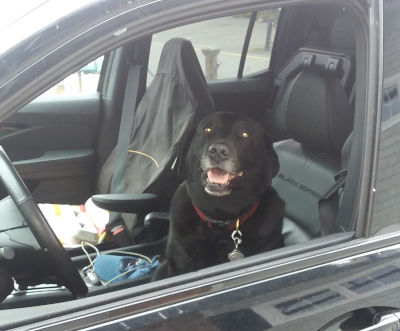 Slouching Towards Edgecomb – by Auggie

[Editor’s note: Auggie had a cracked tooth and a benign fatty deposit removed from his waist in December. It’s probably why he’s still so crabby today.]

Salutations, loyal ones. Curtail your questioning until after I am done speaking. You would be wise to heed my call. And please note that I have provided you with a comments section at the bottom of this page for your lackluster perspectives. I shall instantly revoke this privilege if the churning morass of humanity what reads this blog cannot act sanely and respectfully.

The Bipeds have gone too far this time. They are stoking the fires of an inter-species war. Don and that Microbrain Teddy are accusing me of stealing the “Tedster’s” food. I have NEVER stolen any food in This House. Not even from that dunce Buddy’s food. I wait for that idiot Teddy to finish his meal and move away from his bowl before helping myself to the remains. That is the LAW of Chez Faulty. and I abide it.

I am numb to the ceaseless prattle that emanates from from these vapid jugheads. What I cannot forgive nor forget is the blatant abduction and vicious attack on my person that occurred only days before The Holy Day of Peace that is Christmas.

Shall I detail the horrors for you? Will you be steadfast in your resolve to hear these crimes through? Will you act, or will you mentally flail when I describe horrors beyond your imagination? Please understand I demand action for these transgressions. I shan’t speak to a dump truck full of bowling balls.

The day that shall live in infamy started like any other at Chez Faulty, although I would be remiss to tell you that I suspected treachery when I was fed only a tiny portion of canned food whilst the other beasts indulged in far greater portions. I ignored this first warning to my peril and did not mobilize my mental and physical faculties until it was far too late.

The second warning I brushed aside was when I was loaded onto Don’s truck without the other rabble. It was just Don and me in that truck as we sped off. It screamed of the time I was abducted, brought to a foreign land, tortured for days and forced to endure hurricanes and endless hours in Don’s truck. The third warning was Don talking to me using a sickening-sweet voice that he reserves for dullards, idiots, and children. I suppose I hoped it was a special day and that I was being treated to something special indeed. I was lost in a whimsical, foolish fantasy when I was, in fact, being systematically prepared for slaughter.

With that third warning unheeded, I was a mere twig in a raging torrent of terrible fate.

When Don pulled his truck into “The Vets,” I knew the jig was up. Furthermore, I knew exactly why Don was punishing me- his belief I was eating Teddy’s food and my scorching expose, “Vetting The Vets.” No doubt I would be punished in the extreme by these brutes. If that was my fate, then let them come. They would find no whipping boy in Augustus M.B. Kingsbury.

I walked through the doors to “The Vets” with my head held high and my dignity intact. At every step, I mentally buttressed myself against the coming fury. It was the only preparation I could make.

After a few moments, I was lulled into thinking it was a regular “Vet” visit. I was weighed. I was gently stroked. I was plied with a fairly decent treat. Don conversed with the monstrous guard and negotiated something that I suspect was his 30 pieces of silver, because once the transaction ended, a choking leash [Editor’s note: Slip Lead] was affixed to me with lightning speed and I was quickly deprived of self-determination.

I was dragged back to a room where I was subjugated. Against my most ardent protestations, my front-left leg was shaved. “I AM AN AMERICAN DOG CITIZEN! I HAVE RIGHTS! I bellowed out into the reverberating concrete anteroom. “I DO NOT CONSENT!! I WANT MY LAWYER!!” I screamed as they slipped the IV into my shaved leg. I thought I heard someone (Don?) laugh as the drugs took effect and my reality melted away.

Then there was nothing.

When I awoke, I was in some kind of jail. At first, I was only aware of the excruciating pain in my head. The second thing that became apparent were all the dogs howling. What an idiot I was to assume that I should be the only one to suffer the ugly retribution of The Vets. By the sound of all the howling, there must have been thousands of other dogs and cats who stood up against Vet Tyranny because of my expose. I confess it made me proud and despairing at the same time to hear that maelstrom of suffering.

As I lay with my head aching and spinning, I took inventory of my surroundings. It was the typical Vet enclosure – windowless, a cacophony of injured and crying animals in steel cages, a concrete enclosure, linoleum floor, fluorescent lights, drop ceiling. In my cage – a bowl of lukewarm water that resembled warm sputum, a foul rag that served as a bed, and the smells of thousands of previously-tortured animals.

Then I began to take inventory of myself.

To my complete and utter horror, I realized I was missing a tooth. Only one tooth. What could these devils be working at? What message were they sending me? How many more times would I be subject to this torture? As clarity began to filter back, I realized that I was shaved and had stitches around my wee-wee.

A dawning panic revealed itself to me through the drugs: They removed my wee wee. MY DOG! THOSE DEMONS REMOVED MY WEE-WEE!!!!!!

A quick, frantic check revealed my wee-wee complete and intact. At the same time, I felt strangely slack around my hips. Had these malevolent beasts removed my lower intestine? My small intestine? Did they leave me without kidneys nor pancreas nor spleen? Was their game to remove my essential organs, indulge me with luxurious foods and see how painfully long a creature could endure life?

Thankfully, nothing discernible from my outer body was missing. There was only flabby skin and a lot of pain near my wee wee. Yet, in a strange way, it felt as though a pressure was lifted.

I found myself howling and howling along with the other prisoners. How long had I been howling? It was impossible to tell with my drug-addled mind. Eventually, I realized to my dread that I was howling Don and Liana’s names. My voice was scratchy. I sipped some of the lukewarm water from my bowl. My mouth felt strange without the tooth. My tongue was like leather. I kicked my water bowl over. They would not break me like these other swine. I still had the dignity and purpose I possessed when I strode into this evil place.

Apparently Don had little stomach to revisit the carnage he initiated. Perhaps he was spending his thirty pieces of silver. Perhaps he was spreading rumors and lies to disarm me upon my return. No matter. He was a dead man in my book.

Liana freed me soon thereafter. She got down on her knees and welcomed me with open arms. She took the choking leash off me and put my proper collar with the pirate skulls back on. Then we walked out of that place.

Liana and I made our way back to Chez Salty without incident. The other dogs were there. They paid their respects. They sniffed me with intent. When I thought I could bear no more from them, Don arrived and took all the cushions from the living room and great room couches and put them on the floor. Then he scattered all the couch pillows over the cushions. It took up the whole living room floor.

I crawled on the couch cushions next to Don. Everyone else climbed aboard those cushions and Liana brought out blankets and treats for everyone and everydog. We all watched movies on those cushions until we fell asleep.

In the morning, after breakfast and before my multivitamin, I began laying my plans for revenge.

The Second Coming – by W.B. Yeats

Turning and turning in the widening gyre
The falcon cannot hear the falconer;
Things fall apart; the centre cannot hold;
Mere anarchy is loosed upon the world,
The blood-dimmed tide is loosed, and everywhere
The ceremony of innocence is drowned;
The best lack all conviction, while the worst
Are full of passionate intensity.

Surely some revelation is at hand;
Surely the Second Coming is at hand.
The Second Coming! Hardly are those words out
When a vast image out of Spiritus Mundi
Troubles my sight: somewhere in sands of the desert
A shape with lion body and the head of a man,
A gaze blank and pitiless as the sun,
Is moving its slow thighs, while all about it
Reel shadows of the indignant desert birds.
The darkness drops again; but now I know
That twenty centuries of stony sleep
Were vexed to nightmare by a rocking cradle,
And what rough beast, its hour come round at last,
Slouches towards Bethlehem to be born?

2 replies on “Slouching Towards Edgecomb – by Auggie”

Now I want to go buy every dog related product in your store, this story was so funny and creative, you deserve one hell of a pat on the back Don. 👍

Thanks Ryan! Make sure to catch Aug’s latest battle against “The Vets” in August 2021 titled “The Six Million Dollar Aug.”