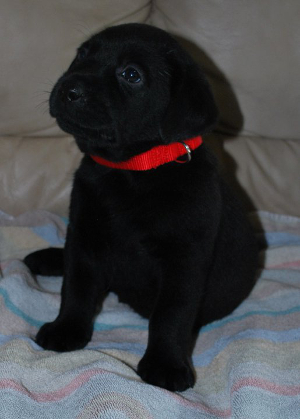 Salty to the Bone – Auggie – The Salad Days – by Don

Instead of gasbagging another story about how Puppy Max humiliated me, I thought I’d switch it up with a last-minute hacked-together e-pulp about Auggie. Of course I’ll include enough tender moments so you won’t call Animal Services on me. And please refrain from being one of the dozens of miscreants who send me emails full of unfocused abuse, terrible grammar, and egregious misspellings. I thank you in advance.

Now if you dare, won’t you take my hand (figuratively- no touching) and delve into my impossibly exaggerated memories of Auggie’s youth?

Aug. Hawg. Auggie. The Aug Monster. Hawgus Monstrus. The nicknames and combinations of nicknames are endless, but it’s important to me that you know his full AKC name is “Augustus Megatron Bulldozer Kingsbury” only because it will be a topic for another last minute blog. No matter what you call him, he’s a handful of dog.

I have to come clean right now. He is NOTHING like the voice in his blog. Nothing. He may be an exuberant, excitable, demanding, intelligent dog, but he doesn’t dream of world domination, owning a howitzer, or supplanting Liana, Max, and me. His blog voice is an outlet for my snarky, angry tirades. And I also like to use all those obscure, haughty-sounding antiquated words I had to learn in high school. Words like “obloquy”, “trousers”, and “kerfuffle.” And oh how I need to let out those angry tirades sometimes.

When Liana and I were looking for a puppy, we didn’t want a little friend for Max. We didn’t want an overload of cute puppy love. We wanted another dog to distract Max so at least we had the illusion of free time. And we assumed Max was still young enough to accept a puppy into his over-privileged, indolent life. Max was 4 years old and we theorized he was as trained as he was ever going to get, thus he would train Auggie for us. Lots of people make those foolish mistakes with dogs.

We felt pressured to get Auggie in September because, as Mainers, we feel like we always have our backs against a brutal winter. Liana and I loathed the idea of house training a puppy in the mountains of snow and bone-cracking Maine cold. Before you start writing those vitriol-filled letters to me, you should know that most Mainers start freaking out about winter in September. We buy firewood in September. We buy studded snow tires in September. We start squirreling away all the little things in September we’ll need for a brutal, glacier-scraping Maine winter— like generators, legally-binding fuel oil contracts based on what the wooly bear caterpillar looks like, and puppies.

As it turned out, a Fall house training didn’t matter. Auggie pooped everywhere. The snow and cold were hardly obstacles. He pooped on everything inside and outside regardless of the season. He continued to poop all over everything until he was about 4 years old. Then he abruptly stopped. We were very thankful, if not confused. Now Auggie is 6 and can’t poop unless he’s at least 50ft into the woods. We’re not sure why. Maybe he’s trying to pay us back for all the poop he left inside our house for all those years.

Max and Aug are first cousins- their fathers were brothers in the same litter. Because Max was such an obedient dog, what could go wrong with Auggie? Turns out there’s a lot that can go wrong with cute little first cousin doggies.

Here’s the first picture of Max meeting Auggie. Endearing, right? Of course not. Auggie is terrified, Max looks like he’s having explosive diarrhea. Max wanted nothing to do with this little usurper. And Auggie wanted everything to do with Max. When we brought them back home, Aug immediately tried to suckle Max. Max slowly drew his rear leg back and kicked little expensive Auggie across the room. The good news is that Aug never tried to suckle another dog and somewhere along the line became Max’s best friend.

Besides almost being killed by a non-suckling Max, there were many other life-ending things for a tiny puppy to eat— chicken-smelling plastic wrap from the trash, rotten seagull carcasses at the beach, 2lbs of kitty litter straight from the bag, an entire year’s worth of heart worm medicine, and my favorite- a bunch of mushrooms under the deck that gave him the symptoms of full-blown parvo. That was only the 1st month we had him. Since then he’s branched out into eating boring old dangerous things like Styrofoam coffee cups left in my car, avocado seeds, and a significant part of a blue plastic sled.

Auggie is happy when anyone or anydog is eating as long as he is eating too. Whenever we have occasion to go through the Dunkin’ Donuts drive-through, Liana and I always get an old fashioned donut that we break apart into little pieces to share between everyone and everydog. Of course Auggie goes berzerk when he gets a little piece of that doughnut. But he also gets enormously excited when Max gets his little bit of doughnut. And Buddy. And Liana and me. He just loves food and he’s happy when everyone is eating.

And just a helpful note: when you come into the shop and Auggie comes running up to you, he’s not smelling your kitties and puppies’ scent on your pants. He sussing you out for treats. Auggie is very serious about food and he could care less about you unless you have it. It’s nothing personal. And another thing, if you come into the shop and give him the smallest of treats and don’t see him for 5 years, Auggie will come running up to you like a waggy-tailed possessed sausage with four legs. It’s as if he’s saying “That was the Uprighter that gave me that treat 5 years ago!!!!!!” And if you give him a second treat after those 5 years, you can’t be rid of him. He will be completely devoted to you and happily wag his tail with you as you cross the Gates of Hell.

That pretty much covers Auggie’s first year of life — Max, pooping, and eating. Next time I’ll fill you in on his other hobbies- swimming, fetching, and macrame. I’d do it now but I’m as sick of writing this as you are of reading it, so goodbye (Auggies voice).

Stay tuned for the my next blog, “Salty to the Bone – Auggie – The Appetizer Days.”