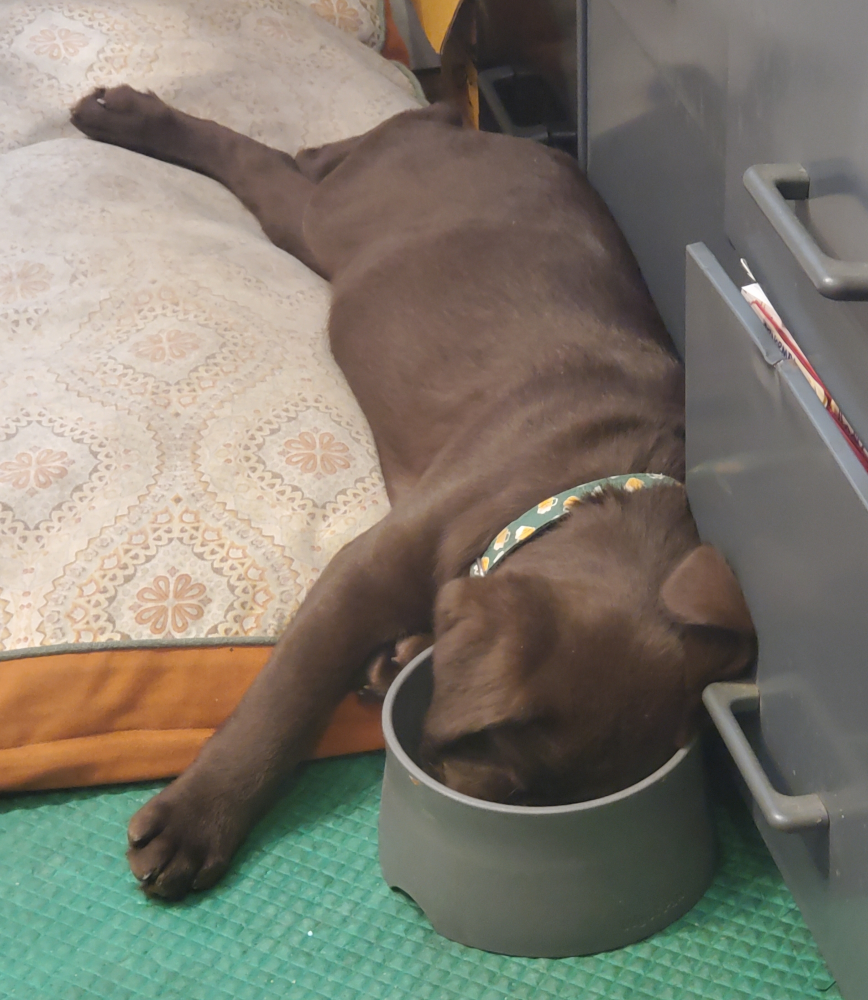 A Brave New Mars – by Marz

HI! I’m Marz! I’m the new dog at Chez Salty! It’s confusing because they call me Fudgie! Or Fudgebutt! Or Fudgebot! Or KNOCKITOFF!! I don’t really pay them a lot of attention! I’ve been at Chez Salty since I was a pup! That was a long time ago! I didn’t even know how to swim or fetch then! Can you believe that?!?!?! It’s crazy how time flies!!!!

Chez Salty is THE BEST! But you need to run everywhere you go!!! Like when Don wakes up in the middle of the night to use the bathroom, I run right in and jump up on his lap!!! Sometimes he’s so happy he’ll throw a towel at me so we can play a quick game of Keepaway and Tug before he goes back to bed!!!!

Other times, Don’s side of the bed is so warm I’ll need to get in there when he’s in the bathroom. He comes back and he gets very angry! He keeps saying “MOVE OVER, MOVE OVER, MOVE OVER…!” But it’s MY side of the bed now, Don! Then he grabs me and tries to roll me over, but I dig at the covers with my paws and scramble back to his side before he can lie down. Then he’ll grab me by my legs and and throw me over on the other side of the bed and get under the covers before my second bounce. Don is so funny! Why would anyone want to go under the bed covers?! GROW SOME FUR, DON! HAHAHAHA!!!

The other thing about Chez Salty that is totally awesome is that there is water all over the place!!! The Bipeds put water all over themselves every morning and I’ll visit them with a stuffy toy!! It was a lot easier to greet them at the Barrelhouse and Pownal!! The cabin has a thick wall. (Editor’s Note: A Tub) and Don will always be angry! Once I jumped in, I couldn’t get out because it was so dang slippery in that crazy place!! So Don had to lift me out and he was totally naked and soaked!!!! I ran all around the house to dry off! Water was everywhere! It was so fun!!!

The one thing I don’t like about Chez Salty is that my water bowl is waaayyy to small to swim in!!! Maybe if I was 7 weeks old, but definitely not 7 months old, Don!!!! GEEEEEEEZZZZ!!!!!

And the other bad thing is that there’s another dog in the walls!!!!! It looks exactly like me! That dog was trying to steal everyone’s food!! I had to battle him and he ran away! I was everyone’s HERO!!! Because now we have all kinds of food!!!!

I LOVE Auggie! He used to bite my face all the time because I ran everywhere all the time!! But he doesn’t try to bite me anymore unless I try to eat his food or mess with his food bowl!! Sometimes I bite Don and Liana’s hands and they get mad!!!! Get over it Bipeds!! Auggie says it’s cool!!!!

TEDDY IS MY BEST FRIEND!!! He’s SO cool! I LOVE TEDDY!!!! HE’S MY BEST FRIEND!! He runs SO FAST!!! Sometimes Teddy runs so fast I need to run SUPERFAST to catch up with him! He’s a big dog so he can run WAY faster than me! He growls at me but he never bites me like Auggie did! He’s so funny!!! [Editor’s Note: Teddy lost half his jaw from cancer. He can’t bite anything. He also hates Marz].

Sometimes we all go swimming at Horn Cove THAT’S THE BEST!!!!! Everyone runs EVERYWHERE!!! There’s all kinds of stinky seaweed to eat, and one time I almost got to eat a rotten crab!!! Don grabbed my head and pulled it out of my mouth. That was so much fun but I wish I got to eat that crab!!!! I can’t wait to find another rotten crab!!!!! Then Teddy showed me how to poop in the water! That was so awesome!!!! He’s a talented dog!!!!!! And he’s my BEST FRIEND!!!!

After the beach we go to the shop!!! The BEST THING EVER is coming to the shop! Everyone is running all over the place!! There are a lot of people and dogs! My favorite dog is Dart! We play all the time!!! He’s a lot bigger than me and we pretend to fight but we don’t really fight!!! That’s our jam! Also, there are TONS of treats and toys everywhere!!!! I don’t know why Auggie and Teddy and Dart don’t help themselves!!!! I do!! Don and Liana yell at me all the time! Go get your own treats, Bipeds! I’m not your servant!!!!

The best thing about The Shop is that you get to run everywhere! One time I was at the shop and there was this scary tank making everyone scared!!! It was pretty scary! Everyone was counting on me! No one would come into a pet shop with a tank in it!!!! So I had to fight it like when I fought that dog that looked like me in our house that was trying to take all our food!!! Luckily, I scared that tank away so people could come into the shop!!! I felt like a Ukrainian Dog!!!!

Sometimes, when Don calls me KNOCKITOFF and I’m jumping SO high and whining by the swing door he’ll put me in the bathroom!!! I don’t know why he does that! I can’t meet anyone or stand at the swing door and bark and whine at all the other dogs! I can’t even run around like everyone else!!! Don is an old grouch who doesn’t like to have any fun at all!!!!

That’s all I’ve got this time, guys! Check back next time and maybe I can tell you what rotten crab tastes like!!!!!!!

Hey Mars,
Keep up the good work….keep barking and whining….it gives the old toadstool aka Don exercise! May the God of Rotten Stick bring forth plentiful fun….and don’t forget Daddy Toadstool likes rotten sticks in his bed, so keep up the good work!
Chester the Gladiator Cat

This is adorable!!!! LOVE YOUR BLOG!!

Thank you!!! There’s one every month!

And thanks for being a longtime fan!!

Hang in there Marz! Keep doing what you’re doing!!

I want to be as happy as Marz! That’s my goal in life🐾😁

It should be everyone’s goal in life!