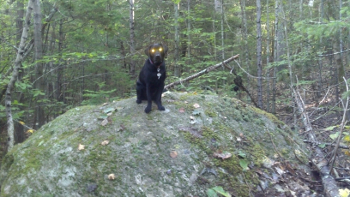 A Spike in Kamikaze Attacks – by Auggie

It is I, your favorite Salty Dog, Augustus Megatron Bulldozer Kingsbury. Thanks for all the virtual kisses. They have meant quite a lot to me throughout the latest ordeal I shall now have to tell you with complete honesty and verve.

I should start by re-stating how much I loathe Canine Prison (Editors Note: It’s Doggie Day Care. In Portland. Not The Coastal Dog in Edgecomb). It is all just a gaggle of googly-eyed, slobbering, sycophants happily running around a meagre enclosure designed to trap them with electrified fences topped off with razor wire and machine gun nests. And that sad gaggle of curs can’t get enough.

I shall now do my best to snuff out any falsehoods or half~truths about this whole rotten incident that has turned my virtuous life into a obscene peep show. And I beseech my loyal followers for restraint and understanding in this time of tribulation. There will be recourse – I promise you that. Please keep this in mind whilst reading through these testaments to evil. I have always been, and ever shall remain a peaceful dog.

On the days the Bread Eaters incarcerate me I don’t even know what my crime is. Stealing Big Dumb Buddy’s dog bone? Nipping Max in his fat snout for encroaching on my food bowl? Peeing in the hallway? Stealing a pig ear? Growling at the tail-up princess who challenged me in MY OWN shop? I don’t know, and I can’t tell. But I can’t believe that the Up-Righters just wake up and decide to punish me randomly. They are savage, but they are not random in their savagery.

My days of imprisonment begin with a rushed bowl of kibble thoughtlessly thrown into my maddening slow-eat bowl. They will even toss our Medicines (Editors Note: Sea Jerky, Fish Oil, Multivitamins, and any actual prescribed medicine ) directly in our bowls instead of handing them out individually to each dog WITH DIGNITY. Even Buddy deserves dignity. Even most of you readers out there deserve dignity.

Then there’s the rush to the car, the furtive drive to a random field, and the manic pleas for dogs to poop. There’s no consideration for our wants or needs. No balls are thrown. No belly-rubs given. No whatever Buddy likes. Nothing. Just “Auggie…. poopy. Auggie….POOPY. AUGGIE… POOPY. NOW.” The obloquy is just too much for a good dog to bear.

Then we’re whisked back into the car and dumped off at Canine Prison without so much as a “Goodbye, my faithful, loving companion.” Max runs right in for his obligatory and vulgar “butt-rub” and then into General Population where he loves all the little slobbering doggies and all the thick-necked Guards ever so much. I, on the other hand, resist and have to be dragged off to show these Two-Legged Beasts that I mean business, and I shall not yield placidly to brute demands or gorilla-like force (Editors Note: Auggie generally gets really excited and runs right in).

On the Day That Should Live in Infamy, I was forced into General Population against my will as usual. I bore the indignity with my characteristic grace and forbearance. The usual gaggle of half-brain-dead, disgustingly-slobbery dogs came galloping up to meet me. I understand the thronging rabble gets excited to see such a stately dog as myself, and I am as graceful as a dog can be in these situations. But you should know that in such situations I suffer. I suffer as I display the proper etiquette required for the good of the collective pack. I suffer for the rabble.

HOWEVER – on this day, as I was wrapping up my obligations to the rabble, I turned to face the most barbaric, merciless and cold-blooded thing I have ever seen in my six years of life. It was a puppy bounding straight towards me with a lolling tongue hanging out of his repulsive little snout.

Why “Spike” was thrust into that situation, I can hardly surmise. Perhaps he was being punished. Perhaps some Up-Righter thought “Spike” was wise beyond his years. Perhaps the shoddy management of the place just caved in under its own stupidity and merciless hangovers. Who can say with any certainty? The only thing that can be said with any certainty is that it was a bad day for “Spike.”

Those of you who have met me will vouch that I possess no blood-lust. I am a peaceful dog. But when my steel is tested, I shall rise to the occasion and never back down. Regrettably, “Spike” paid the price that fateful day for the Guard’s transgressions.

I stood there, tail straight up and baring my formidable fangs at this pup. I growled at him and stared at him directly in the eye. My hackles were raised. “Spike” ignored my canine warnings to his impending peril. What better deterrents could I give the whelp? And yet “Spike” bore down upon me like some happy, slobbering Kamikaze.

He bounded directly up to my face. If he had relented at that moment, all would have been forgiven. But Spike the Littlest Kamikaze looked me directly in the eye. I snapped. Literally and figuratively.

I bit that impudent little mongrel right on his precious little proboscis.

“Spike” shrieked and ran crazily away whilst howling at the top of his tiny lungs. He blindly slammed into the larger dogs along the way and bumped off that pathetic plastic bridge that all the muscle-bound curs fight over constantly. He eventually alighted in the corner of the facility furthest away from me – disoriented and shuddering.

Retribution was swift and brutal. I was grabbed by the collar and dragged to the Dungeon of Excruciating Torment. (Editors Note: It was just the Doggie Time-Out Pen. And he only spent about 5 Minutes in there. Sheesh). I spent the rest of the day by myself with only the spiteful torture of the smarmy guards to pass the endless hours.

You can certainly judge me if you see fit, but I’ll ask you to look less at the HOWs of this unpleasantness happening and more towards the WHYs this unpleasantness had to happen. I hate puppies. I didn’t even like myself as a puppy. And EVERYONE knows it. The Bread Eaters know it. The pack of slobbering wretches at the Prison know it. The brain-dead guards know it. Even aboriginal tribes in the world’s tropics and arctic regions know it. I HATE PUPPIES (Editors Note: We have to side with Auggie on this one. The staff knows he hates puppies).

If everyone knows that I hate puppies, then WHY was “Spike” even allowed in the same Cell Block? I observed the correct protocols of canine greeting and “Spike” did not. Why was “Spike” not punished? (Editors Note: You punished him by biting him, Aug). I contend to my loyal followers and the rest of you marginally-intelligent readers that I am not a chunk of worthless meat to be whipped as an example to this swarming horde. I was unjustly incarcerated and deprived of my Dog-Given rights. I demand satisfaction and redress.

I am a good dog and I shall not be made sport of.

One reply on “A Spike in Kamikaze Attacks – by Auggie”

[…] I have been repeatedly ambuscaded by, and triumphed over The Evil Vets. My mettle tested by Doggy Day Prison, and still suffered the slings and arrows of Don’s dark heart for over 77 dog […]