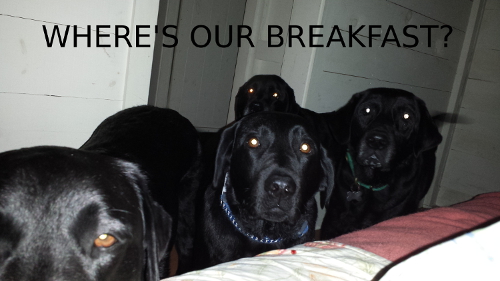 Now, I’m not a dog who complains all the time, but it happened again this year. Sometime in early November Don stopped feeding us at the proper time. We three good dogs would get up at the regular breakfast time and wait patiently for breakfast. And wait. And when we could wait no more, we would remind him that it was breakfast time. Trying to be helpful only earned us a couple forceful “GO LIE DOWN! IT’S 4 AM FOR DOG’S SAKE!”s. Well, excuse me for trying to help, Mr. Angrypants! And why do I care how many AMs it is? And what is an AM for that matter?

Just to get breakfast on that day, I was forced to put my snout as close to Don’s face as possible and blow my dank morning breath in his face. Buddy stared and licked his lips as obsessively and annoyingly as he could. And Auggie jangled his collar tags for hours but had to give up and bark to get Don’s attention. And Don still wouldn’t get us breakfast! He just threatened to strangle us all and he put his pillow over his head like a big jerk.

Eventually, Don got up and filled our bowls, but he wasn’t happy about it. In fact, he was downright rude. He’s gotten a little better in the last 25 times or so we’ve woken him up, but it’s a constant effort to get him to do what he should be doing- feeding us on time! All we’re trying to do is help you, Don. You don’t have to get snotty and yell at us because we descend on you every single day in the very early morning hours like a swarm of hairy, black bees and demand you give us food. We’d like a little respect. And food. And a nice long walk with plenty of treats. Also, we want access to The Forbidden Closet. But mostly we want respect. And food.

And don’t even get me going on dinner! It’s pitch black outside by the time we get dinner. There used to be so much more light when we got fed. It seems like all we do is remind Don to give us breakfast for a zillion hours, eat breakfast, go on a long walk in the woods, come to the shop and get a treat, take a nap, meet lots of people and dogs, take another nap, go home, clamor for Don to give us our dinner for several hours, eat dinner in the dark, have a snack and snuggies, finally get to sleep, wake up, and remind Don for a zillion hours that it’s breakfast time. There’s more to life than that! We’re always eating in the dark, and that’s not healthy. Have you heard of a little thing called lunch? You may want to look into that, Don. Otherwise you will have a pack of sick, mutinous dogs on your hands. And no one wants that. Not even Auggie.

I’ll tell you another thing. I love Don, but if he doesn’t stop his sadistic ways, Auggie, Buddy and I WILL revolt. Normally, I keep Auggies subversive nature in check. But I can no longer promise that. And Buddy is an easily-led, arthritic, somewhat muscle-dog.

We are free. We are dogs. And we can not rest until we have breakfast and dinner on time.