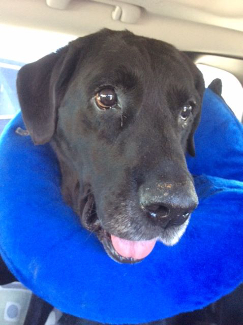 (Editors Note: In January, Big Buddy Dog went in for surgery to remove cancerous mast cells on his back legs. He had no idea what was happening. This is his compelling story).

I want to tell you about something that was really scary. Don and Liana didn’t love me anymore. It was pretty scary! Don is usually my best buddy! And I am his dog named Buddy. I thought we had Buddy Power! But Buddy Power! failed that day.

I kept trying to think of what I’d done to deserve such bad things. Was it because I peed inside? Begging for food in the kitchen? Eating the goose poop on the lawn? Not coming when called when I’m let outside to pee at 3am and its 10 degrees below zero? Getting into the trash and gnawing on a whipped cream can for 6 hours during Thanksgiving? Peeing inside the second time? It was impossible telling. The Bi-Peds are so fickle.

So I just ran around the center of the living room looking for my food bowl while the other dogs were eating until it was time for Medicines (Editors Note: when the dogs get their supplements, fish oil and Sea Jerky). But they didn’t even give me Medicines either! Why? Why was I was SUCH a bad dog! Were they trying to make me sad? Did I deserve being sad?

There was no time to think on this because I was whisked into Lianas car and taken to a strange walkies place. It was nice to have the whole car to myself, and one of my goals is to have walkies in strange and exciting places. Like a Dairy Queen. THAT is strange and exciting! But this walkies place we went to was just strange. And a little creepy. It was like the time we went walkies and Don and Liana followed me everywhere until I pooped in the woods. Then they ran over to it and talked a lot to themselves. As I said, that was kind of creepy.

After I had “Hungry Walkies” I was brought back to the car and I settled in for a peaceful ride home to Breakfasts and 16 hours of nap time. But that is not what happened!

I was brought to a slippery white place. I originally thought it was a Dairy Queen, but the smells were way different. It smelled like bleach and animals instead of ice cream and grease traps. But everyone was friendlier than that time I ran into the Dairy Queen. I was really confused!

The people in the Slippery Place were very nice. They gave me lots of head rubs and butt rubs. Butt rubs, butt rubs everywhere, but not a breakfast to eat. I wanted breakfast. Or even a treat! There was no breakfasts or treats. Liana gave my leash to a nice woman who I thought would finally give me something to eat.

The next couple hours are a little foggy. I remember them shaving my leg and a little prick on my backside.

After that I remember waking up in a cage that had a LOT of different dog smells. Alphas and Omegas, Small and Large. Everything in between. And cats. There was also some kind of parrot. I couldn’t smell him, but he made an awful raquet. Or is it racket? I don’t know. All I knew was that my leg hurt.

I am not afraid to admit to you that I was afraid. I didn’t feel very good. It was like I had eaten that rotten mussel on the beach all over again. More like 10 mussels. But there was no Don or Liana. There were only other hurt dogs in cages. They were just as afraid as I was. Why oh why did I pee inside the house the second time? There was also a lot of noise from the other animals that made me sad. I was just tired and hungry. I wanted to go home and have Buddy Power! But I could only just sleep.

When I woke up it was light and there were a lot of dogs barking. I don’t bark so I just listened to them. My leg hurt. But they FINALLY gave me some food! I was so hungry! I looked into the nice lady’s eyes for more, but she just smiled and took my bowl out of the cage.

Liana came right after I got fed! I was never so happy as when I saw her. She got me out of the cage and talked with some nice people. Then she took me home and gave me a whole bunch of treats. To tell you the truth, I wasn’t too excited for treats. I was still feeling bad from the rotten mussels. But when we got home I drank soooo much water. Liana let me up on the couch where we snuggled and she said nice things in a nice way to me. I’m never let up on the couch.

But I was still sad that Don didn’t show up. Until Don showed up! I got up and wobbled over to him. He said I had a “big goofy grin on my face.” That seemed like a strange thing to say. It’s not like I could have a big goofy grin on someone else’s face. But I still felt a little woozy from all the rotten mussels I ate. I was just happy that Buddy Power! was restored and he was giving my ears a good rubbing!

And I never thought I would be so glad to see all the other guys! Max, Auggie and Coal came over to me in the living room and and sniffed my leg. Auggie even licked my face before he ran in the dining room to look for his dinner. He’s never done that before. And he wasn’t angry that I was up on the couch. After they ate dinner Don took the cushions off the couch and we all, Bi-Peds and dogs, hunkered down to watch a movie about something that was very loud.

Suddenly it occurred to me. Like the sharpest crystal looking-glass I had ever seen. An epiphany of such momentous occurrence I felt blessed that it was revealed to me in my short canine lifetime. I was lying with all my Buddies in this world. Our heads were resting on each other’s bodies and our warmth was in a tangle of blankets. Nothing else mattered except the creatures next to me. I lifted my head up and looked around. Contentment was worth so much more than happiness.

And I really had to pee again.

Thanks for reading this far.