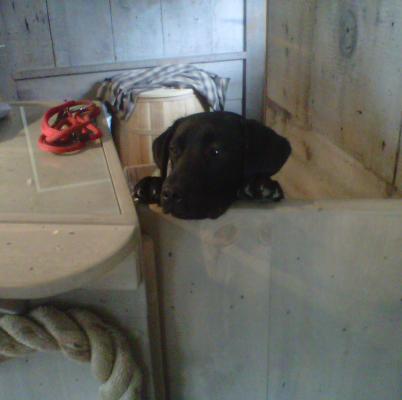 The Augmentor Cometh – by Auggie

[Editor’s note: Auggie tore his right ACL tendon and damaged his left this spring. He was in a lot of pain when it happened. Instead of surgery, Liana and I opted to enroll him in physical therapy and alternative treatments. You should know that Auggie also has a very vivid imagination.]

Those of you shiftless slag-heaps what have followed this train wreck over the years know that my fight with “The Vets” started early in 2019. This little feud has cost me dearly. Since that time my enemies have multiplied exponentially. At first I noticed I was being followed by strange beings at all hours. They began peeing in my usual places around town with a frightening urine that burned a sensible dog’s faculties. My water bowl was routinely flipped over. These charlatans clearly sought to intimidate me in their surreptitious and infantile way.

These episodes were amateurish and forgettable. Yet after my mental and physical torture last February, they became more pronounced and threatening. I began to feel alone in ways I never had before. I recognize my genius demands solitude, but when all-seeing eyes with evil machinations befell me that cursed February day, I realized my mistake in collecting enemies and disregarding allies. Skullduggery was certainly afoot. I looked suspiciously ’round every corner and expected ambush at every turn. It all played havoc with my delicate skin.

Who could have predicted that years of abusing tourists and all you other degenerates out there would leave me vulnerable and afraid?

Read on should you dare, yet be warned– the casting of your eyes upon this very document will no doubt be traced and recorded by “The Vets” and a host of other febrile minds. I am told one of them simply goes by the name “Banjo.” And don’t say I didn’t warn you. Continue at your peril down the darkest, dankest and furthest pits of “The Vet’s” rabbit hole. Or shuffle yourself off to the waiting TV with a bag of chips and a cool beverage like the mediocrity-craving Shemp you are. I care not.

On the day my world unraveled, I was forced to Deb-and-Whits-House-by-the-Sea. In classic tradition, the other brutes were absent. Once I was discharged from the vehicle, Don threw a tennis ball across the lawn. Chasing and retrieving is what we Labradors are borne to. That is in our DNA. How can a reasonable dog deny their DNA? How could a Dachshund not dig? How could a Border Collie not herd? And how could an Irish Setter possibly not hunt? Just kidding. Irish Setters are the Muppets of the Canine family thanks to an egregious Biped eugenics program.

When the tennis ball bounded across the lawn, what could restrain me? I set out with my usual vigour and drive. I was still Supreme Fetch Dog Throughout All the Land and I had to earn that title every single day. That is the Labrador’s Creed.

Instantly, excruciating pain flashed across my eyes. My rear legs buckled and rendered me asunder. I was sure I’d been shot. My chin ground into the lawn and inertia of my own body drove me a considerable distance until I skidded to an inglorious stop. When I came to, I realized I was howling like a whelp and crawling with my front paws across that bleak, open lawn. To my added horror, I was still crawling after that absurd tennis ball and not to the cover of the rhododendron bushes. High-caliber bullets smacked into the ground all around me, kicking up thick chunks of sod, yet I could only think of the tennis ball. That is the Labrador’s Creed.

When the miasma in my mind lifted, I heard machine-gun chatter along the tree line mixed with the more sporadic and accurate solid booms of sniper rifles. Hand grenades thudded all around and shredded Deb’s exquisite shrubbery and herb gardens. I saw Liana enable and shoot an M72 LAWS at a target I could not see.  A CRACK-sizzle told me she had scored a direct hit. These beasts had armor!!! Liana scored many more hits that day.

And yet my rear legs remained immobile. I began to claw the earth and drag myself frantically towards the cover of those waiting rhododendron bushes. It was the only thing within tens of meters that offered the merest of protection from the murderous gunfire and varied assaults on my being.

I have disparaged Don in the past as a laughable stooge, yet on this day he displayed an unshakable nerve. Without regard to his personal being, he ran into the kill-zone with his M-79 grenade launcher blazing in one hand and his M249 LMG in the other. He threw my mangled and vulnerable body onto his shoulder and humped it to the relative safety of the vehicle. Bullets whizzed and shrapnel whined by him as he set me gently on the comfy pillow in the back seat of the car.

He tended my wounds as best he could and gave me a quick snack to keep my strength up. After an affectionate rub to my head, I saw him dash off through a boiling cauldron of death to do proper battle with these feculent savages.

“Noooooo!” I screamed after him, but there was no stopping him. He was possessed. Bullets slapped into the car as the snipers tried to re-acquire the target that was me. I kept my head down and I kept my powder dry.

Don reappeared a short while later with an an enormous smile on his battle-sooted and bloody face. He laid he same tennis ball he had originally pitched in front of me.

Excelsior, Don! Your bravery shan’t be forgotten! In normal life, you may be a boorish lout, but under fire, you are a colossus in command. And Liana’s prowess with Light Antitank Weapons deserves respect. The Bipeds, nay, MY Bipeds chased off “The Vets” that day like the barbaric hyenas they are.

As I sat within the safety of the vehicle with the battle raging ’round, I realized I was witnessing a watershed moment. This event was not churlish intimidation. Nor was it some amateur assassination attempt. This was a military hit job. And because of that, I was no longer a solitary dog fighting a pernicious, shadowy cabal. The Salty Pack was finally united. They had their eyes opened and WE were fighting a common evil.

The bullet may have paralyzed my back legs, but my morale was soaring. I was made comfortable on the couch and given tranquilizers. Attention was showered upon me. Treats offered. Belly-rubs given. Teddy and Max paid their respects in turn. Don even gave a small piece of his hamburger. My coat was lavishly brushed and rid of shedding hair by Liana. I was anointed with oils. Yet I could not enjoy even the simplest things in life. I couldn’t run. I could not move. I couldn’t even dash outside to hold the swarm of impudent squirrels in check.

I was carried by the Bipeds in a sling everywhere- even to pee and poop like that dolt Buddy. I never understood how Old Buddy Boy voided himself under those conditions. Now I knew. It was a humbling affair all the way ’round. I have never been a layabout, so my physical dependence on the kindness of others was perhaps the most infuriating phase of my rehabilitation. The next phase was the most terrifying.

And the most rewarding.

After a week or thereabouts, I was handed over to a team of Bipeds what resembled “The Vets.” If I wasn’t so heavily sedated at the time, I would have been terrified. These Bipeds set to work upon me deftly and with zeal. These were no evil “Vets” of yore. These were Vet-Angels descended from heaven to save me from the Canine scrapheap.

They firmly yet gently manipulated my mangled limbs. I was forced to take just awful medicines. I was introduced to an “Underwater Treadmill.” It is an ingenious device where water keeps my body buoyant such that the impact to my joints as a result of running on the treadmill is immensely lessened. I was attached to machines that I did not know the purpose of. I remember one machine was so fearsome such that I had to be sedated to even approach it. It sent deep reverberations through my back legs.

I could feel my strength slowly returning. I could feel the coming transmogrification like a pupa in his chrysalis can feel the butterfly.

The day of my transformation started with the usual Underwater Treadmill and other routine goings-on. Yet when a needle was thrust into my leg and I was sedated without encountering The Fearsome Machine, I was beguiled.

When I awoke, I was of course groggy, but at that time I was used to it– the pain, dry mouth, the lack of appetite, the unfocused eyes and all the rest. Yet this time, the pain was intense and my head was full of wool. I thought I was perhaps in the hands of “The Evil Vets” again. I was very sedated yet I knew that couldn’t be true. What would be “The Evil Vet’s” game? To build me up and knock me out now? Why not just kill me outright like they had tried to kill me when I sustained this injury? It made no sense.

I began to gather my wits, and with greater perspicacity, I sensed there was something different about my rear legs. They felt different. They looked different.

The Cyborg “Augmentor” was online. All circuits were green, and I was eagerly awaiting orders. 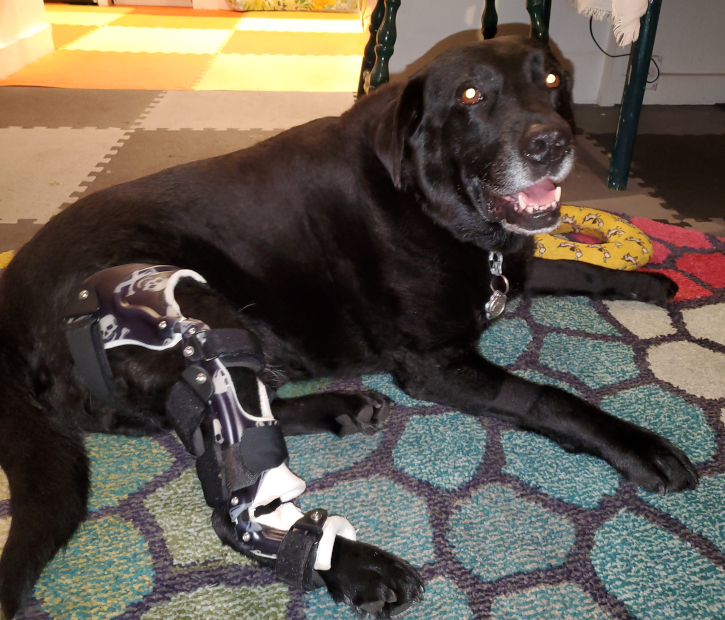 3 replies on “The Augmentor Cometh – by Auggie”

Augie, you’re a brave dog! My Pippa (a mere springer spaniel who does not hunt under any circumstances) had the same injuries as you, with two surgeries (she is very proud of her battle scars, even covered now as they are with fur). After the first surgery, she had rehab as well, with the underwater treadmill (of which she was deeply afraid, until she got on). After the second surgery, she has had the fearsome needles inserted, and is much happier. In fact, she’s healing so well she chased two squirrels this morning before I could catch her. Sigh — I can see another surgical intervention, much sooner than I’d like!

What an amazing and harrowing tale, Augie! And what a brave boy you are. So glad you are on the mend. Sending luv and wishing you a speedy recovery friend. Sincerely, Mister Pemberton (tripawd black pug) and mom, Gina Figoli

Thank you Gina! It will only be a matter weeks before I am ready for duty. And you can be sure I will clean this wretched hive up with my new “Aug”mentations.