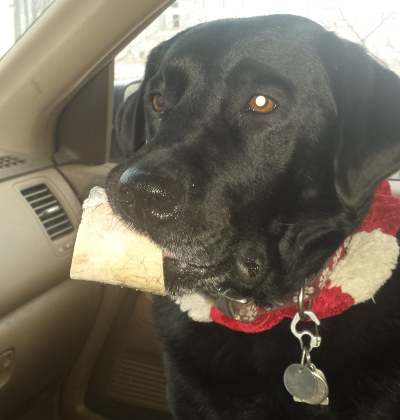 Have you heard of this thing called Christmas? It comes once a month and everyone gets a lot of canned food. Except Don and Liana. I got a can of kangaroo dog food this Christmas. (Editors Note: We carry cans of kangaroo dog food for hyper-allergic dogs like Buddy). What kind of canned food did you get? Can I have some? Just a little? Can I lick the empty can? Please? Are we not friends?

Every Christmas is so great! So many people come over and there’s a big party with tons of food everywhere. Kids go up the hill out back with sleds and Auggie will chase after them and nip at their heels until they come to a stop. Then he runs straight back up the hill and waits for the next batch of kids going down with a big smile on his face. He absolutely LOVES it! Buddy tries to gallop after the sledding kids and hurts himself every single time. So for the rest of the afternoon he will climb his achy bones up on the couch and not let anyone else sit there. Eventually, the younger kids coordinate a fashion show centered around the immobile Buddy. Once that happens, they’ll dress us all up in costumes and parade us through the living room.

For some reason Don and Liana bring a tree into the living room and put all kinds of stuff on it and under it. I don’t know what all the stuff on the tree is except one time Don put a bunch of popcorn on it and Auggie knocked the tree down in less than 5 minutes. All I know is that the things underneath the tree are presents for us dogs and Bipeds. I know this because I open ALL the Christmas presents in our house. (Editor’s Note: It’s remarkable. Max DOES open our presents. He’s really good at it and he loves doing it!).

I take the crinkly paper gently up in my teeth, put my paws on the present and start pulling. At first there’s a small hole. Then I reposition my teeth to make a bigger hole and pull gently back with my paw. I just LOVE the sound of the crinkly paper ripping! If the present has ribbon around it, I’ll shake the present back and forth like a wolf laying into a rabbit. That wows all the Bi-Peds. (Editors Note: Liana and I have been dutifully wowed for years. Our guests are amazed). Then I lay the present bare before them for their inspection, awe, and distribution.

Opening presents is a big responsibility that I don’t take lightly. Don and Liana count on me to get those presents unwrapped and I have always honored that honor with the utmost professionalism. In normal packs, a Biped like Don should chew the wrapping off the presents. But Don is so moody that Liana probably can’t trust him to do a decent job like me. And Don would probably try to swallow any whiskey he got as a gift and we’d end up having to rush him to the vets to have his stomach pumped.

I have always revered my position in the Salty Pack. Except one time. I hadn’t had a treat in over an hour and I was asked to open a present. I could smell the Bare Bites inside the paper from across the room. When it was given to me, I grabbed it and ran to hide it upstairs under the guest bed. (Editors Note: True Story). Don ran after me and finally caught me.. That was a long time ago and I learned a lot from it. But let’s be clear, that doesn’t mean I’m not going to try it again in the future with better results.

The Bipeds allow Auggie to unwrap his presents. But Auggie’s on a knife edge. He gets too excited. If he hears a squeak or a honk or smells treats in the present he goes Crazy-Town and chews through the wrapping paper, ribbons, plastic and everything. It’s not a pretty sight. And Auggie should know by now that Don and Liana strongly discourage any dogs eating any plastic.

Buddy doesnt play with toys or fetch or anything and he’s pretty dumb. Sometimes Don will throw a present at his head and Buddy wont even react. It will just bounce off Buddy’s head and roll around on the floor (Editors Note: I only throw soft toys at Buddy. Not canned food). Then he’ll sniff it and look to Don like there must be some kind of mistake.

One thing I should tell you is that I hurt something called an ACL. I dont know what ACL means but I know it’s my right rear leg because it really hurts. I can barely stand on it. If you see me in the shop please don’t push on my backside. And please don’t tell Auggie. I’m sure he’ll try a giant power grab if he thinks I’m disabled. And no one wants that. (Editors Note: Before we resort to surgery on Max we’re going to try to let it heal by itself with braces, keeping him sedentary, and drugs – no, not those kind of drugs… anti-inflammatory drugs).

At least a bad leg is good for something. That something is getting lots of Sympathy Treats! All I do is hop around on three legs and look sad. I’ll look up at Don’s Mom or Vicki (Editor’s Note: Great new hire at the shop) with Sad Eyes and they’ll slip me a little something. Don’s mom stuffed me full of treats over Christmas without the other dogs knowing. The best part? The other dogs didn’t know.

I can’t run after kid-filled sleds. I can’t look princely in the Dog Fashion Show. I can’t even wrestle with Auggie in the snow. All I have is my Christmas presence.