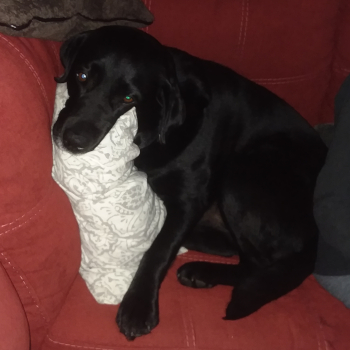 How do you do, you lugubrious swine? Shall I display to you the enormous sweep of my influence? Swallow the last of your warm, spittle-infused canned beer and refrain from asking questions until I direct you that such questions are welcome.

Anything less would waste my valuable time.

My Most Honorable Mr. Zuckerberg,

Normally, I reserve this correspondence for your teeming underlings and paid lackeys as you are an immensely busy man – needed by the US Congress to unravel sticky situations regarding the divisions between free speech, misinformation, data harvesting, and immense sums of money. My complaint will thusly be refreshingly short and simple for you to resolve.

On August 11, 2020 on or about 4pm, whilst in the course of using your social media platform “Facebook” to construct a series of humorous advertisements (“Ads” to the layman) for my Biped’s small business, I was confronted with an issue – a “glitch” you will no doubt want to be aware.

I constructed an enormously humorous “Ad” regarding our monthly newsletter “The Salty Paws.” When I achieved a level of hilarity suitable for my Biped’s discerning audience, I selected the “BOOST POST” button and chose $50 as the contracted sum for services what are outlined in your Facebook End User License Agreement (EULA). Satisfied that we were now in fact, engaged in a mutually-bound and lawful contract, I selected the “PUBLISH NOW” button.

I admit that I sat back with an eager, perhaps smug grin and awaited the cascading likes, comments, and Facebook shares that typically rain down when the “PUBLISH NOW” button is selected. I could practically taste the delicious serotonin and dopamine flooding into my system like a narcotic-fueled Biped!

Yet, Mr. Zuckerberg, I regret to inform you that my “Ad” did not publish! I further regret to say that after striking the “PUBLISH NOW” button repeatedly and without result, I deigned to strike the browser’s “REFRESH” button.

At once, a small, astringent screen of your design queried whether I should navigate from the current page- yet without saving the fruits of my intellectual labor! Could you imagine the horror Mr. Zuckerberg? Could you indeed?

I canceled such navigation at once and was delivered to the same barren screen what did not contain a trace of my “Ad!” I robustly attempted the browser’s “BACK” button, as any intelligent being should.

I was duly greeted with the same frustrative missive. I could not retrieve one letter of the enormously witty copy I had laboured on with such hard-wrought determination and conviction. Fair Zuckerberg, I could only imagine your mental condition should your “Facebook” platform in it’s first, most beautiful iteration disappear without a trace nor with a method for retrieval.

After a brief period of disappointment and grief, I recreated my “Ad” again from memory. Thankfully, I possess an immeasurable memory, and was thankful to recreate the lost “Ad” inasmuch as I was able to give its replacement a higher degree of polish such that it demonstrated greater levity and broader appeal than its predecessor what had vanished into the dark reaches of cyberspace.

Yet, Mr. Zuckerberg, when I clicked the “SUBMIT” button the Second “Ad,” was lost in the very same manner as the first! I must admit I was frustrated and angered by your otherwise steadfast and sturdy product I had come to rely upon.

Nevertheless, Mr. Zuckerberg, I am an AMERICAN and as such, endeavor to persevere. However, it is with great anguish that I submit to you a similar failure on the Third attempt. And the Fourth.

The Fifth was also lost without a trace as an unprotected galleon on the Spanish Main in the days of yore.

This no doubt disturbs you in the extreme, Mr. Zuckerberg. No person who has reached such a pinnacle of worldwide acclaim could possibly attribute it to shoddiness and inattention to detail. And certainly not by refusing payment for such minutiae as my “Ad.” I trust this is why you are putting a furious pen to paper at this moment to rectify the situation.

Perhaps honest mistakes were made. Good people may have errored. My hilarious and eagerly-awaited “Ad” was not published and was lost into the irretrievable reaches of cyberspace. My faithful and loyal followers were deprived of hilarity and the chance to shake off the yoke of their suffocating modern drudgery. And yet I can purport no hatred in my heart.

You should understand that I am a dog who would never lust for vengeance, Mr. Zuckerberg. I should dearly hope your steady hand would perhaps stay the sustained calls within your colossal and labyrinthine organization for the heads of those responsible. No children need be made orphans as a result of this incident. I am adamant on this point.

And so I shall conclude this missive in conveying my utmost faith that your personal attentions shall resolve this minor kerfuffle to the satisfaction of both parties. Of course, the invitation for you, Priscilla and family to visit us in Boothbay Harbor is a standing one, and my previous offer to provide a hearty round of lobster rolls at Shannon’s Unshelled is of course, always current.