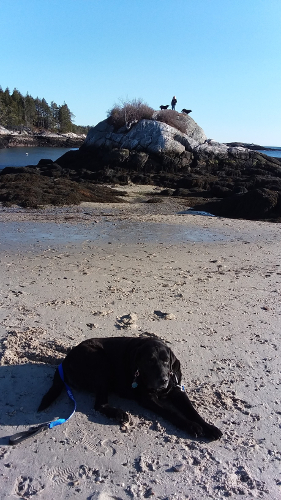 A Little Kelp and My Friends – by Buddy

Hi there. It’s Big Buddy writing the blog again this month. I hope I don’t let you all down. I like writing this blog so much!

I am not going to write a blog about how Don makes everyone mad. He would be very sad if he read my blog and then he would get mad at everyone. Especially me. And I’m not going to talk about how old and achy I am all the time like I always do. Even though I am old and achy. Well. I guess I just ruined that promise about not talking about being old and achy. I won’t talk about it anymore. From now on.

What I really want to write about is the time we went to the beach because it was so fun. It was also strange because we usually go to the beach at Horn Cove in the morning and this time we went to The Hendricks Head Beach in the afternoon. I didn’t think anything could be more fun than Horn Cove Beach, but The Hendricks Head beach was pretty fun that day!

Don and Liana do not like me eating stuff at the beach. They don’t mind me eating stuff AT the beach like treats. They get mad when I eat stuff ON the beach – like kelp and dead crabs. It is a pretty good rule, because no matter how good the stuff on the beach tastes, I always throw it up in places that make Don and Liana very mad. Like the couch or in Don’s truck. So I only eat a little kelp and dead crabs from the beach when they are not looking and try to throw it up in the yard or garage.

The day we went to The Hendricks Head Beach there were all kinds of people. There were also a lot of dogs. Don was throwing a tennis ball out into the ocean for all the dogs to fetch even though it was only April and the ocean was very cold. Don never throws the tennis ball in the ocean when it is cold because the dogs will need to dry out inside the house. And as Don says, “There’s nothing worse than that wet dog smell.” [Editor’s Note: The ocean was cold. The air was perfectly good dog-drying weather.]

All the dogs had a very good time fetching in the cold ocean water and I had a good time watching the dogs swimming and fetching. Then it got very crazy when Mowgli and his Biped, Winter showed up. Mowgli likes to fetch the ball a lot and he is very good at running and swimming. He made Teddy and Auggie run and swim so hard for the ball. They were really surprised! Everybody loves Mowgli and Winter.

Don threw a tennis ball that landed on The Kitten Island and Auggie and the other dogs couldn’t find it in the ocean. They ran around and around until Auggie whined. Auggie never misses a tennis ball. Ever. Then Max ran up The Kitten Island to show Auggie where the ball was. Then everyone and everydog except Don and me went to go climb The Kitten Island to find that tennis ball. Even Liana went to help. I didn’t climb it because I am old and achy and Don didn’t climb it because he is old and fat. But it was good that Don is old and fat because he took a lot of good pictures and videos that day. If you would like to see them, I am sure Don would like to show you them. I am sorry for saying that I am old and achy in this blog again. I guess that wasn’t a very good promise to make.

When everybody was looking for the tennis ball on The Kitten Island I tried to get over to where all the kelp and dead crabs are. I almost got there but Liana ran down and stopped me before I could eat even one dead crab or anything good and rotten. It was OK because she brought me back to the nice, warm, dry sand. Then she sat down and rubbed my head for a long time.

I hadn’t pooped the whole day. I usually poop twice a day and Liana was worried. I was worried, too. Liana said I was a ticking time bomb. Then Liana ran up to The Kitten Island again with all the other dogs and people. Don didn’t seem worried.

I walked down to the water and did my Fake Swimming where I get up to my neck in the water and I just walk back and forth along the beach. I kept looking for the lost tennis ball but I couldn’t find it. I can’t see very well. I kept swimming up and down that beach looking for the tennis ball and then I had to poop really bad. I had to help all my friends find that tennis ball! I couldn’t let them down. But I also had to poop really bad!

I just pooped in the water. It was OK because I was far away from where everyone was fetching and I got out of the water before I came back to the place in the water where my poop was.

Nobody found the tennis ball.

One reply on “A Little Kelp and My Friends – by Buddy”

[…] in previous blogs. Things like vomit, a whole herring, at restaurants, berries & rotten apples, kelp and dead crabs, a “cargo cult,” poisonous mushrooms, or a leaf of lettuce. Click on the links if such […]