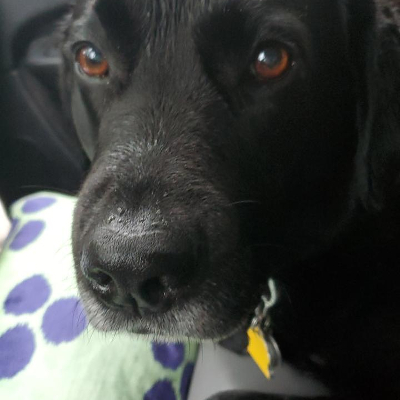 Good Day, Malingerers. This is a long one. Don’t start it if you cannot finish it.

I was given no warning. Don brought me to the truck and bade me inside. I thought we were going to the local park for Walkies and mayhap a treat for afters. As there were none of the other dogs with us, I thought it would be a good chance for Don and I to bond over my plans to subjugate him and the rest of the slobbering muppets in our pack.

We did not return for seven days.

We ended up driving 3 hours to some dismal town where the air smelled of potatoes and freshly turned dirt. Immediately I thought “Ireland,” and I was excited. That theory was squashed when Don let me out of the truck. It smelled like a diesel fueling yard, garbage and crushed dreams.

Don fed and watered me on the vast, tarmac-like parking lot. He threw me back in the truck with a compensatory pig ear he obviously pilfered from the shop. Then he took his leave to gorge and drink himself stupid at the no-doubt marginal hotel bar.

After Don had drunk his fill with the local hayseeds, he brought me up to our cigarette smoke-encrusted room (Editors Note: The “pet” rooms and the smoking rooms were one and the same). Don snored like a tractor with water in the fuel line and the entrenched cigarette smoke in the carpet and wallpaper brought me close to nicotine overdose.

We awoke in the morning where Don was able to wash most of the sticky stale cigarette smell off himself. I was not so lucky. Don then made a cursory attempt to exercise me by dispiritedly throwing a tennis ball on a tiny green patch next to the hotel. Unfortunately, my lungs were swollen and irritated such that I was unable to give chase. I ran for the tree line, pooped, peed and came back to the truck where Don watered and fed me like a common stray on the enormous parking lot again. He made no attempt to retrieve my poo.

As recompense for my tobacco sufferings, Don gave me bits of his fast food breakfast. Don may be a recidivous rube, but the man can appreciate a dog’s delicate appetites. The sausage. The biscuit. The cheese. The microwaved egg product. Those tiny shared bits formed a bond between Don and me that only combat veterans could possibly understand.

After a short drive we were ordered out of the truck by a fully armed Crayon Eater with a bullhorn. Don affixed me with an unnecessary leash and we went out to meet our destiny.

The Armed Man combed through everything in the truck. Even Don’s underwear. I growled menacingly as he neared my bag of kibble. He laughed jovially and gave me a condescending head rub. Try that again and they shall call you Johnny One-Hand, sir. I hope he contracted a filthy disease from sifting through Don’s disgusting underwear and socks.

After about 30 minutes, the Armed Man gave me a treat and waved us through. I felt like a salmon over a large dam.

We arrived at some hotel in the evening completely exhausted. I had no idea where I was. It was a nice place and it was still light. Don made sure I was fed, watered, and gave me a pig ear. Then he ran down to the hotel bar to bloat himself with victuals and drink again. I was grateful. It was a long day and I didn’t notice when he crawled into his bed. The lack of ambient nicotine was greatly appreciated.

Don woke up at about 05:30 and wasn’t angry for a change. He got directly out of bed, put water on himself, fed me, and brought me to an outside patio where he had breakfast. He gave me some of his cantaloupe and the bits of a hash brown that fell on the floor. It was excellent.

He threw me in the car again and I will admit that my blood ran cold at the thought of another 12-hour jaunt across hill and dale in that foetid truck.

Instead of visiting military checkpoints and tobacco soaking-points, Don and I stopped at pleasurable beaches and hiked several exotic trails. What’s more, he would share his lunch and snack bounty without restraint.

After a full day of treats, hiking and swimming, we went back to the hotel and Don got room service and he shared a nice meal with me in front of the TV.

Altogether, it was the most pleasant day of the trip.

We always get up early when Don isn’t hungover. Day 4 was no exception.

There were no leisurely pieces of cantaloupe for breakfast, nor chummy throws of the tennis ball. I was fed kibble in the dark and thrown into the truck. We then sped off to fill Don’s insatiable fast food maw. I got mere crumbs for supplementary breakfast that day despite Don wolfing down pounds and pounds of Canadian fast food. I shan’t beg. I shan’t dig under the seats. I shan’t demean myself for scraps. I conducted myself as a good dog.

Then it was back to driving for hours and hours until it got terribly rainy and windy. We spent the night at “Danny’s Convention Center” if you could possibly believe a place like that even exists. The kids in the next room delighted in slamming the door over and over well into dayspring. Their television volume was so extreme that aliens in other solar systems were begging for clemency.

The bar must have been full of sophisticated people because Don came back to the room an hour later with food in a bag and a grumpy, selfish attitude. He watched The Weather Channel obsessively.

Despite Don’s extensive Weather Channel “studies” the night before, we landed smack dab in the middle of Hurricane Dorian. Excelsior, Don!

We left the sanctity of Danny’s Convention Center at 07:00. We didn’t stop until we hit an abandoned Holiday Inn Express well after midnight. It was the worst day of the trip, though the hotel was nice and forthcoming with dog treats.

As we left Bathurst, New Brunswick, we passed armoured columns on the highway heading towards Nova Scotia. Nothing registered in Don’s tiny brain. Don waddled right by the insufferably loud generators at the Tim Horton’s we lunched at. Still, Don didn’t realize the consequences of driving straight into the nucleus of a killer hurricane. Granted, it was a tamer version of the Bahamas killer hurricane, but it still messed the Canadian Maritimes, and us, up.

When we hit Cape Breton Island in the late afternoon, Don pulled over for fuel and finally realized our predicament. The queue for petrol was 10 deep and people were frantically filling jerry cans. Don couldn’t even pee like a human being because the power was being used for fuel and freezers. We ended up not getting petrol because even Blackheart Don couldn’t bear to take fuel from these desperate people.

We drove to Sydney, Nova Scotia no doubt because it’s a fairly big city. The city was in ruins. We were lucky to get fuel. There were huge trees and telephone poles down everywhere. There was no electricity. There were no hotel rooms. Don paid cash for some beef jerky and mixed nuts, and we continued to drive. We drove towards Moncton in the hope civilization had regained its foothold. It was the darkest drive I can remember. No fueling stations nor hotel signs. No highway interchange lights. No other vehicles. The lights were purely celestial.

I would be remiss to mention the combination of darkness and silence was like nothing I’ve ever experienced. When Don pulled off the road for the pee breaks, twas abnormally quiet and crystal clear. This was another bond between Don and myself that the rest of the pack shall never share.

We ended up at the Holiday Inn Express in Moncton at 02:00. It was abandoned. It was bereft of power but two hours previous. We were its only guests.

We woke up lazily and Don fed me on the asphalt again. He then put me in the truck. A half an hour later he came back with stolen bagels and danishes and little cartons of milk. The milk cartons made him look like a hot dog-fingered 3rd-grader. Then he pulled out slices and slices of bacon from his coat. He was not skimpy with this bounty. (Editor’s Note: I didn’t steal anything. They had a bunch of food left over and they gave it to me rather than throwing it away).

That day we had a couple hikes on the Bay of Fundy. They were satisfactory. As for this leg of the trip, the highlight was the stolen parking lot bacon. I shan’t complain.

Towards mid day we passed through another military checkpoint. This time the Crayon Eater did not make us get out of the truck or mess with my food. I cringed as he barraged Don with questions. Thankfully, Don didn’t get flummoxed enough for them to search the truck and we were waved through.

And what did Don decide to do upon our return to our sacred homeland? Right back to the same “Nicotine Suites” we spent our first night. It was even the same putrid room. I have no doubt the bar was populated by the very same hayseeds Don bonded with a week ago.

We left “Tobacco Smoke Resorts” and headed back to Boothbay Harbor when Don’s head stopped ringing. In three hours we were back home.

Don changed into his “comfy pajamas” and turned on the TV to a “Rick and Morty” marathon. He gave me a toy stuffed with peanut butter and I fell asleep halfway through eating it.