Land of the Free and Home of the Dog - by Max 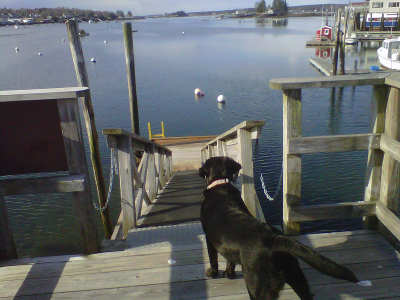 I'd like to take a minute to say goodbye to one of my oldest friends. She was a mini dachshund and her name was Olive. She was 17. She was an old lady when I met her as a pup, and that never changed. Goodbye, old girl. We loved you, and all of Chez Salty will miss you terribly.

I know Don and Liana give me freedoms that wouldn't befit other dogs. I am very grateful to them (Editors Note: Don & Liana, not the other dogs). They give me those freedoms because I go out of my way not to challenge Don and Liana on a whole range of issues.

I don't challenge them by committing common-dog crimes like getting into the garbage, taking up all the bed, barking at insignificant events, digging in the garden, or laying into Auggie when he licks my food bowl. And he licks it a lot for a dog that calls me "Fatso." In fact, I've gotten pretty svelte whilst Auggie has porked up significantly since his last blog (Editors Note: True).

Anyway... Don and Liana joke that I am more like a Biped than a dog. And when I look around at a lot of dogs, they are right. Dogs are obvious in their desires and blunt in their approach. I am none of that. I am couth. I am sophisticated. I am devious. I might obey Don's commands when it suits me. And only if it benefits me.

But, you ask, what makes a discerning dog like me tick? What gets under my skin to excite me except for ticks and the occasional leech? Read on and be surprised. The answers will surprise you.

I am a Social Dog - After every Breakfast and Medicines (Editor's Note: Fish oil, Sea Jerky and various harder drugs for Buddy). I get let out of the cabin and go visit all our neighbors on Southport. And sure, I get lots of treats, but there's also buttrubs galore and lots of "Good Doggie!" And I get to see a lot of other dogs like Tuc and Pippa. Even Auggie comes down. But Aug leaves as soon as it's clear that there's no more treats to be had. I hang around all day until the Buttrubs get down to below 0.003/second or it's raining and the Bipeds won't let me in. I'll also go down after dinner if there is nothing going on at Chez Salty. And even if there is a bunch of stuff going on at Chez Salty I'll go down.

I Take The Advantage - We have this thing at Chez Salty where Don tells us to "Go Get Our Collars!" So we'll all run out to the living room or wherever and bring them back for a treat. In theory, that is. What really happens is that Auggie runs out and gets his collar, but only brings it partially back. And Buddy just meanders around looking for his treat without looking for his collar. I have a plan.

First, I'll get Auggie's collar wherever it is because Don will only give a treat when the collar is at his feet. Not in the hallway or kitchen or 5ft from his feet. AT HIS FEET. So I'll charge out and get Auggies collar and put it at Don's feet. TREAT #1 for Max. Then when Don asks for the collars again, I'll go get Buddy's. TREAT #2 FOR Max. Then I'll go get my own collar. TREAT #3 FOR Max. Any questions?

I Protect The Weak - Sometimes other dogs are too doggy. They jump up on the Bipeds, they knock down the little Bipeds, and they tear around hurting the smaller dogs. And as long as I am physically standing, I will stand against these acts of Dog.

When Bailey the 100lb Lab tries to jump up on Don, Liana, their friends, little Bipeds, or small dogs like Olive, Ginger, Pippa, or Tuc - my hackles go up. I get between Bailey and the Bipeds and growl (Editors Note: At Bailey, not the people). I know! Me! I never growl! And then if Bailey doesn't back down I'll charge and nip him in the face. That usually takes care of it. If it doesn't, I'll run him off with Auggie hot on his heels. And if the situation isn't entirely to my liking, I'll go steal Baileys toys and dog bones when he's not looking until he gets the message.

I Taunt The Strong - Sometimes Don gets all us dog bones and everydog will have a great time gnawing on them until the cows come home. But when I'm near the end of my dog bone, I'll bury it. I know it sounds gross to you Bipeds, but just think of it as slow marinating in our Mother Earth.

I Don't Fetch And I Don't Like Swimming - They're too doglike. Don really likes fetching dogs like Auggie and the Late, Great Coal. And he really likes it when dogs Swim Fetch. I hate fetching. And I'm pretty ambivalent about swimming. But what I'll do for Don is PRETEND to be incredibly excited about him throwing the stick in the water. This in turn gets Auggie and other fetching dogs excited. When Don actually throws it, I'll charge in the water like he just threw a steak.

But I'll stop as soon as it's clear that there's no way I'll get it. Then I'll sit there and wait for Auggie to swim out, get the stick and swim back. Then I'll fight him for it. Of course I win most of the time because Auggie is tired from swimming after the stupid stick and I've just been standing there. I also outweigh him by 20lbs.

I Love My Community - Every Harbor Fest, Auggie and I take part in the Fishin' For Fashion Show. We're the only dogs and we're the hit of the show! Liana dresses us up in our finery and parades us around like the real models! You should come see us! Last time I had the Soupy Poopy, but this year will be THE BEST!

Bipeds Need Love Too - Last week I felt like snuggling on the bed. Unfortunately, Don was up there and I moved on over and spooned next to him. He put his arm across my belly.

It was slowly getting dark and the house was still. Don's breathing slowed and became deep. The orange sunlight coursed its way through the blinds and into the back wall. And that's when I got the idea to synchronize my breathing with Don's.

I'd match his slow intake of air, and when he exhaled, I'd match the short burst. This went on for several minutes. Then Don would try to mess my breathing rhythm up by holding his breath for an extra second. I corrected my breathing and Don laughed.

Don squeezed me around the chest and held it. Then he rolled over and went to sleep for real. This is our home.