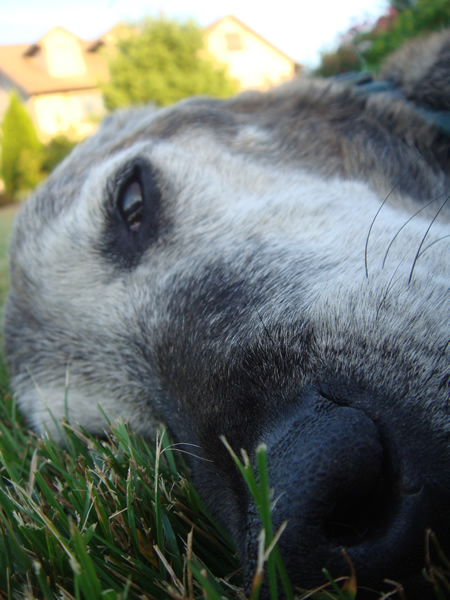 Happiest When: Swimming, sleeping, just after a meal, and Mom comes homeeven if she only went outside for a second

Bio: Monty was the fattest of nine pups born to Rita, the Golden Retriever, in Breckenridge Colorado on November 14, 1997. Six pups were black and three were brindle. The other brindle brothers were named Otis and Bubba.

His mother was offered $1000 and a truck shortly after his adoption by Montys biological dad owner, but thankfully, Mom was already in love.

His first poop was left under the Christmas tree. Paper training was confused with pee on the recycling or any newspaper or mail left on the floor next to a chair.

Monty has since traveled completely across the United States by car, been on a plane many times, on a motorboat, pontoon boat, peddle boat, and lobster boat, drank wine, beer, and the Mississippi River, visited Graceland, run up a ski trail in Breckenridge, lived in 4 states, walked a K-9 4K, had stitches in the back of his leg, run away from the backyard to the front door, puked on Moms neck in the middle of the night, eaten three very expensive sunglasses, one very fabulous pair of heels, snapped a K-9, weight-bearing tooth off, gotten a black eye while home alone, had his own side of the bed (with pillow) for 11 years, used a step stool to get on the bed, and now only runs best in his sleep. His soft fur and sweet demeanor carry him beyond his bodys years.