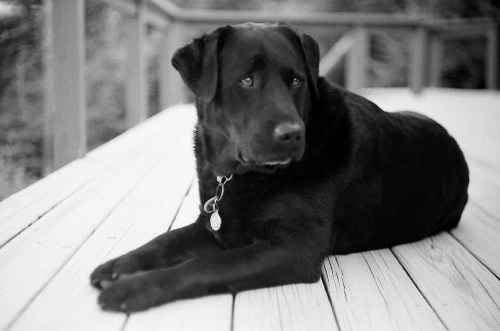 Somehow I figured it would be a good idea to write in my own voice rather than one of my dogs. I did this for a couple reasons.

So with all that being said, let's talk about Max.

Did you know that some of the names we considered for Max were: Gary, Bulge, Dozer, Bums, Chumlee, Pudgebot? No? That's because we were only seriously considering the non-stupid names. We're not totally deranged. But we got a solid laugh out of it, and I hope you just did. Interesting and Unexplained Max Fact #1: His middle name is "Gary."

We got Max one day when we decided we wanted a dog. The conversation went like this:


This went on for more time than I'm willing to admit until we realized how idiotic we sounded. Then we got into the car with a copy of Uncle Henry's. Our goal was to get the pudgiest, biggest-headed Black Lab we could find. I like to think we hit the ball out of the park with that one.

Max cried and whined the whole drive home from his little whelping box in Bangor. He would only stop when I howled with him. Ah-whooooooo....( to Werewolves of London). Max would cock his head in that great Labrador way and look at me. When I ran out of breath, he would resume whining. He wouldn't stop unless I howled, and (being a smoker at the time) I started to get light-headed and stopped singing Warren Zevon. The whining was almost unbearable for the rest of the way home. It all seemed like a big mistake.

Speaking of mistakes, when we got home I put Max on the ground and he ran away. Liana cursed my libertarian tendencies, but Max didn't run into the woods and away, he ran about 20ft away from us on the lawn and regarded us. Regarded. When we moved towards him 2 feet, he would jump up and move 2ft further away. This went on for most of the afternoon.

Liana and I decided to go inside the house and leave the door open whilst spying on him through the front window. He just sat there for a couple minutes before he decided to venture inside. He was cautious. He was trepidatious. He was displaying the big pain in the butt we would come to know and love as Max for the first time.

He eventually came inside and made his way through the kitchen. When he poked his head around the corner and saw us in the living room he freaked out and squeezed himself under the giant soapstone stove we had hooked up to the fireplace. He looked at us malevolently from the hearth. He had chosen well because there was no way we could get at him without dismantling the stove. The space between the stove and the fireplace was too narrow to get our entire arms through, and he was savvy enough to evade our stubby arms. What we had was a stalemate.

Like dopes we brought him food, treats, and water to the fireplace. When we least expected it, he would dart out like a Vietcong battalion and devour his food and gulp his water. And he did this all with his eyes squarely focused on us before scuttling his big butt back under the stove. This went on for several days. And like dopes, we put newspaper down in back of the stove for the pee and poop and thanked our lucky stars that it was July and we wouldn't need the stove for another 3 months at least.

We wracked our tiny brains. What would lure the chimera that was Max out of his Keep? The solution was Blue Bear - a pedestrian stuffed toy we don't remember getting. We put Blue Bear in front of the stove and Max gradually came out. Apparently, food and water weren't the only things in life. Destroying stuff was a new and exciting spice to life.

Soon after that, we started going on walks, giving treats, and yelling a lot at a little headstrong puppy that didn't seem to want anything to do with us. And every once and a while when we least expected it, Max would melt our hearts by doing something resembling liking us. Like falling asleep on our shoes.

Tune in next time when we discuss when Max ruined an entire wedding, broke Liana's ankle, and discovered the vast ocean. All on separate occasions, of course.